Please ensure Javascript is enabled for purposes of website accessibility
Log In Help Join The Motley Fool
Free Article Join Over 1 Million Premium Members And Get More In-Depth Stock Guidance and Research
By Adam Levine-Weinberg – Apr 8, 2018 at 11:55AM

The top U.S. automaker will no longer publish monthly sales results, as GM tries to push investors to take a longer-term perspective in evaluating its business.

Last week, GM made an even bolder move, announcing that it would discontinue its monthly sales reports after March. Whereas ending the practice of sales calls followed the example of many of its overseas rivals, GM is the first major full-line automaker to abandon monthly sales reporting entirely. This appears to be part of a broader effort by the company to get investors to focus on the big picture, rather than obsessing over short-term trends.

Going forward, GM will continue to report sales by brand and nameplate, along with details on fleet vs. retail sales, inventory levels, incentive spending, and average transaction prices. However, it will provide this information a few days after the end of each quarter, instead of on a monthly basis.

GM's results from the past two months highlight the limited usefulness of monthly sales reports. In February, domestic deliveries declined by about 7%, stoking investor fears -- even though the downturn appeared to be driven primarily by tough comparisons and lower incentive spending. 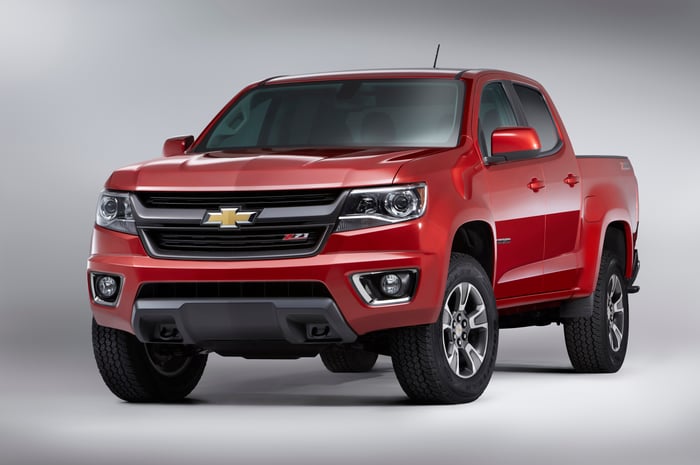 By contrast, General Motors benefited from an extra selling day last month. It also increased its incentive spending on a year-over-year basis. As a result, deliveries surged nearly 16% in March.

Looking just at retail sales (to individual consumers), GM started the year with a 2.4% decline in January, followed that up with a 10.5% plunge in February, and bounced back with a 13.8% gain in March. That averaged out to 0.8% retail sales growth for the full quarter. The total may not be a perfect representation of the General's underlying sales trends, but it's certainly a lot more informative than the monthly gyrations GM reported.

Following a trend from other industries

While General Motors will be the first major automaker to drop monthly sales reporting, other industries moved in this direction years ago. Retailers used to report their comp sales results every month. (A few still do.) Similarly, airlines used to report unit revenue on a monthly basis, but they have been abandoning that practice one by one in recent years.

It may not be a coincidence that GM ended its monthly reporting on a strong note, with double-digit sales growth in March. Management may have wanted to leave investors with confidence that the business is performing well, in order to avoid concerns that it had something to hide. (On a similar note, Delta Air Lines CEO Ed Bastian allowed the carrier to stop reporting monthly results last year, but only after it had achieved three consecutive months of unit revenue growth.)

Some pundits have speculated that GM's move to quarterly sales reports may spur Ford and other competitors to follow in its footsteps. However, that's not guaranteed to happen.

For one thing, it would be harder for Ford to move away from monthly reporting in the near future, given that it has been facing substantial sales and earnings pressure recently. Additionally, the company's management seems to prefer greater interaction with investors. More than four years after GM ended its monthly sales calls, Ford's are still going strong.

From General Motors' perspective, there isn't much potential downside to ending the practice of monthly sales reporting.

In theory, monthly reports might boost the stock price if the availability of frequent business updates gave investors the confidence to award GM stock a high valuation. Clearly, that hasn't worked: General Motors stock trades for just six times earnings. To be fair, auto manufacturing is a cyclical industry, which justifies lower earnings multiples during good years -- but six times earnings is absurdly low relative to the rest of the market.

It's possible that the monthly sales reports have actually been holding back General Motors stock. The constant drumbeat of sales updates may be diverting investors' attention from bigger-picture trends, such as GM's improving product portfolio, its investments in next-generation technology, and its cost-cutting success. Since Mr. Market can't seem to tune out the noise, the best move might be to eliminate it entirely.