There's one possible development that could bring Micron's impressive run to a halt.

Wall Street wasn't satisfied with Micron Technology's (MU -2.74%) impressive fiscal second-quarter results. The memory specialist reported terrific top- and bottom-line growth once again, but investors got a sense of a potential downturn in the memory pricing environment and didn't think twice before hitting the panic button.

This isn't surprising as Micron stock has doubled in the past year, and investors want to realize their gains in case memory prices do stumble. 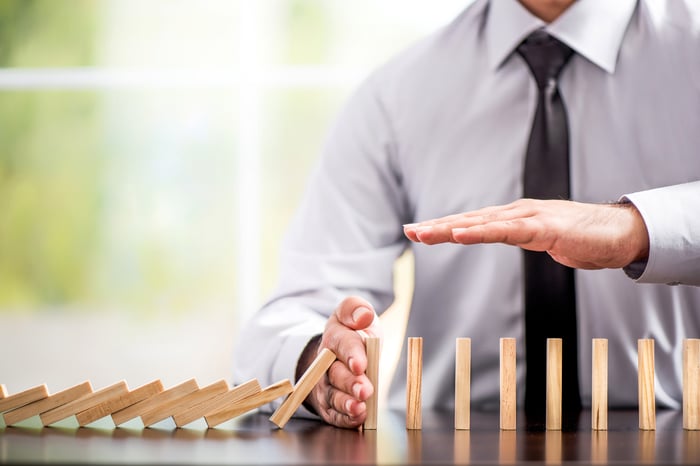 Micron has benefited big time from an increase in the prices of DRAM (dynamic random access memory) and NAND flash over the past couple of years. High demand and reduced capacity led to a highly favorable pricing environment. The DRAM market, for instance, grew 76% in 2017 thanks to a combination of higher average selling prices and strong demand. However, DRAM growth is expected to fall to 30% this year as prices will begin moderating due to an increase in the production capacity.

NAND prices, on the other hand, have already started declining as supply is now overtaking demand. As a result, Micron's NAND pricing dropped on a sequential basis last quarter, and this led to a 2% drop in the segment's gross margin. Nomura estimates that NAND prices could decline 10% this year as supply might increase 43%. By comparison, NAND flash supply had increased 34% last year.

These indications of a memory price bust have spooked Micron investors, which isn't surprising as the company had taken a massive beating in the previous down cycle. Slow PC demand and high industry output had led to a 50% drop in the price of DDR4 memory back in 2015. The downturn continued the following year as DRAM prices fell 20% in the first three quarters of 2016, and this hurt Micron's top and bottom lines before the recovery started. 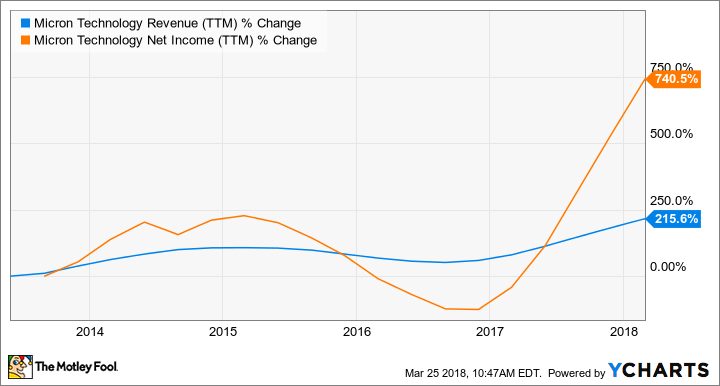 Micron management is positive that strong end-market demand could help prevent an oversupply, as DRAM and NAND are now used in applications beyond personal computers, such as data centers and smartphones. But memory industry players have been ramping up their production capacities as they don't want to pass up the opportunity, and this has started destabilizing prices as already discussed above.

Samsung and SK Hynix, for instance, are together expected to invest more than $20 billion in chip fabrication equipment this year, following a similar outlay in 2017. Samsung is planning to boost its 3D NAND and DRAM output by ramping up its Pyeongtaek fab. SK Hynix has similar plans as well as it is building a new 3D NAND production line in Korea and a DRAM line in China.

Micron doesn't want to be left out of this race either, so its 2018 capital expenditure will be at the upper end of its previously issued guidance range. This means that the company could spend more than $7.5 billion on capital expenditure this year as it intends to build out additional capacity in Japan and Singapore that will come online in 2019.

This potential increase in memory output will eventually lead to lower prices in the current conditions of the market because of the demand-supply dynamics at play. So, investors' decision to book profits isn't illogical as memory price growth has tailed off, and the situation could deteriorate further as more production capacity comes online.

How well the industry can balance these supply and demand adjustments remains to be seen. Supply growth is currently expected to meet the rising demand. There are chances of an oversupply in the memory industry, which will prove to be a headwind for Micron Technology's revenue and earnings -- short term or not -- like has happened in the past.

This is why investors need to keep a close watch on the developments in the DRAM and NAND space as the cyclical nature of the memory industry is Micron's biggest risk that could bring an end to its impressive growth.