Please ensure Javascript is enabled for purposes of website accessibility
Log In Help Join The Motley Fool
Free Article Join Over 1 Million Premium Members And Get More In-Depth Stock Guidance and Research
By Anders Bylund – Apr 8, 2018 at 10:49AM

We regular investors can make lots of money from a long-haul grind that would put Soros to sleep.

George Soros never met a risky investment he didn't like. The Hungarian-American investing guru likes to pour huge investments into volatile securities, exploit whatever under-appreciated market quirk that he identified before other investors, then make a quick exit with a solid profit. Or loss, in some casses -- Soros is also known for admitting his mistakes and caching out at a loss rather than following a failed investment down the drain.

This hit-and-run strategy has worked exceptionally well for George Soros over the years, making him one of the wealthiest and most successful investors in history. But he was never a patient investor, so you won't find him on the hunt for excellent dividend stocks with stable long-term prospects.

That's why Soros is unlikely to place a big bet on Hormel Foods (HRL -0.38%). The slow-growing food products giant is just not his style. For the rest of us, however, Hormel is a fantastic income stock for the long run. 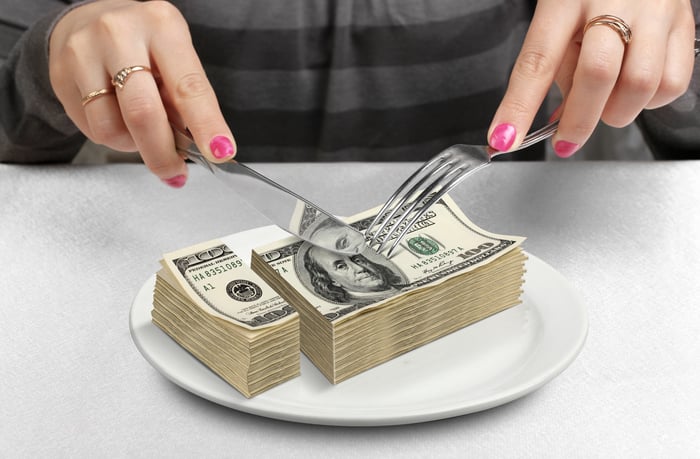 From Spam and Muscle Milk to Skippy peanut butter and Wholly Guacamole, Hormel manages some of the best-selling food brands in American grocery stores.

This is about as stable and mature a business as you can imagine. Hormel's top-line revenues have increased by just 9% over the last five years. On the other hand, it's a veritable cash machine -- 9.5% of Hormel's incoming sales are converted into free cash flows at the end of the day.

And here's the best part. Hormel's leadership has a long-standing history of shoveling that cash back into the pockets of shareholders.

The company has increased its dividend payouts in each of the last 51 years, without fail. The quarterly payouts have grown 121% larger over the last five years and 838% bigger in two decades. Hormel likes to funnel approximately 40-45% of its free cash into the dividend budget and is also an opportunistic buyer of its own shares as market conditions dictate.

Longtime Hormel investors have pocketed a 754% return over that two-decade span, or 1,140% if they reinvested dividends along the way. It's been a long, slow, predictable grind with market-crushing results. George Soros hates investing like this, but it works just fine for us mere mortals.

Not George Soros' cup of tea, but that's alright; Soros made his money with a risky strategy requiring tons of research and hands-on involvement. Always keep your finger on the trigger, in case it's time to make a trade.

Hormel represents the exact opposite investment type. It's a stock you can buy today and leave alone for many years, maybe even decades. Management will find ways to stay relevant, whatever happens to the food market next, and you can just let those growing dividends do their job.

Knowing your money is invested in a stable, predictable, steadily growing stock such as Hormel should allow you to get way more shut-eye than what George Soros is probably used to with his own investing style.