Critics are skeptical, but the action-camera maker could be ready to make a U-turn.

Is GoPro (GPRO 3.64%) burning the furniture to heat the house? The action camera maker just introduced a low-priced camera that does almost everything its higher-priced siblings do in a bid to juice sales, yet many fear it will only serve to hurt margins and cannibalize sales of those high-end cameras.

GoPro has a big problem on its hands. Sales of its action cameras are in decline, and revenues of almost $1.2 billion are barely above where they were back in 2013, having peaked at over $1.6 billion two years ago.

Part of the problem is the cameras GoPro makes are too good. Once you buy one, there's little need to upgrade, unless you want some high-end add-on, like 4K quality or 360-degree capabilities. But most casual users don't need those kinds of accessories, and because the new entry-level Hero camera that will sell for $199 looks and operates like its higher-priced brethren without some of the bells and whistles, GoPro just might sell a lot of them. 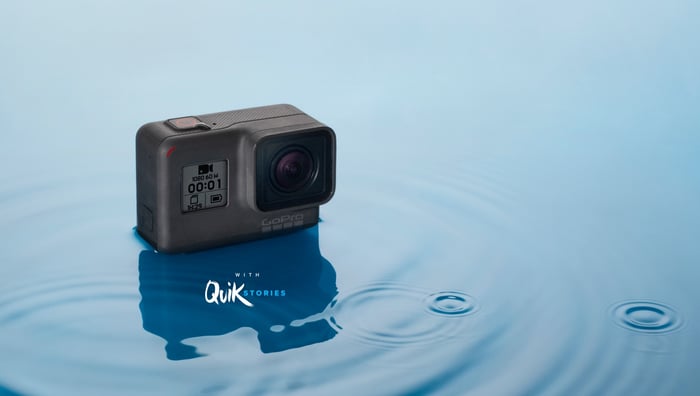 While it is also true the camera maker could undercut sales of the more advanced Hero 5 Black and Hero 6 Black, it might be able to make up in volume what it is losing in price. It's also a smart move because it allows GoPro to offer cameras across all price points. Those looking for advanced features can still get them, while casual users may be enticed to buy one now because they're affordable.

Moreover, it gives GoPro the opportunity to get a second sale if the user decides they do, in fact, want or need those higher-end features. For $200, users are getting the typical GoPro functionality of waterproof capabilities, video stabilization, voice control, touch display, and the ability to shoot at 1440p at 60 frames per second. No, it's not 4K and you don't get 120 or 240 frames per second, and though those features are nice to have, most people are not going to miss them.

GoPro has done the discount camera thing in the past, and though not successful at the time, it hasn't really been successful selling only pricier models, either. And today, there are cheaper action cameras on the market competing for consumer dollars, such as those from Sony, TomTom (the GPS makers), and Yi, so GoPro needs to confront the new market dynamic.

GoPro might still be the leader, but consumers have a lot more choices today. Beforehand, they had to choose between buying a GoPro with a lot of features they didn't want and wouldn't use or go with a knockoff. With the low-priced Hero, now you can get a GoPro with almost everything that gave its cameras their reputation.

The new camera also gives GoPro the chance to put its disastrous foray into drones behind it, while potentially juicing sales that could make it attractive to a buyer. CEO Nick Woodman has hinted several times that although he would prefer for GoPro to stay independent, he has no problem with the company getting bought out, and a more mass-oriented camera that sees sales tick up, with the chance for upgrade sales in the future, could make it a better buyout candidate.

As critics of the new Hero camera point out, this strategy could still go wrong. Some high-end products don't do well trying to go mainstream because it cheapens the image and dissolves the air of exclusivity. But a camera isn't necessarily one of those products, and getting a GoPro into the hands of more people can also boost its alternative software streams.

And the licensing deal with Jabil (NYSE: JBL), which makes GoPro cameras, to have the camera tech added into third-party devices, expands the window of opportunity further.

Certainly, there are risks in pursuing the low end, but GoPro has few options at this point, and a cheap new Hero could be what saves the company. The stock has lost over 60% of its value from last fall and is down 40% in 2018 alone. At around $4.50 per share, GoPro trades at a fraction of its sales, suggesting it may be worth a shot in the belief that a $200 camera can help it make a U-turn.