In line with its efforts to find new sources of revenue growth, GoPro (NASDAQ:GPRO), most known for its wearable action cameras, recently announced it had signed a global, multiyear technology and equipment licensing deal with manufacturing services company Jabil (NYSE:JBL). The agreement will give Jabil access to some of GoPro's reference designs and intellectual property (IP) to make lenses and sensor modules for third-party cameras.

The companies mentioned in a press release that there's "strong demand" in the enterprise market for cameras in the smart home, military, fire, police, and rescue segments. The cameras and image sensors might also be used in video conferencing, robotics, or self-driving applications.

The two companies have combined efforts on devices before, and the new licensing and IP deal opens up the opportunity for GoPro to make money from its technology, without having to increase sales of its cameras, which has proved difficult for the company as of late.

But don't hold your breath that the licensing deal marks a turning point for GoPro. 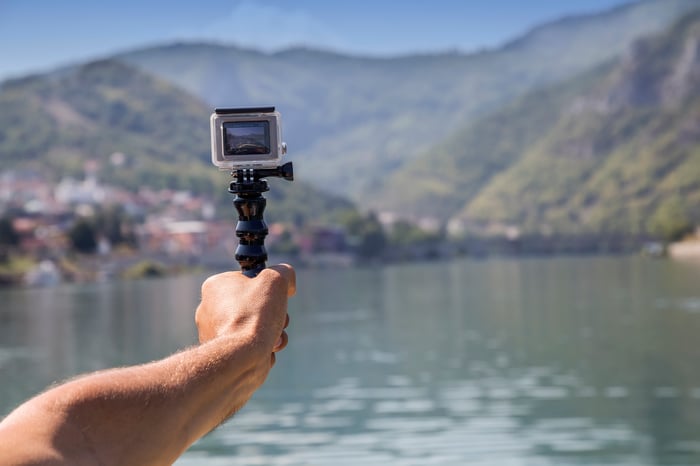 Why GoPro is looking for new revenue opportunities

It's hard to blame GoPro for trying its luck at a new revenue stream. GoPro's revenue fell 38% in the fourth quarter of 2017 and earnings per share remained in the red -- just as they were the same time a year ago. Fourth-quarter sales of $334.8 million were far from the company's own estimate of $470 million for the quarter.

That's just a taste of GoPro's problems. The company's camera shipments tumbled 40.4% year over year in the fourth quarter, and revenue in key areas like the Americas, Europe, and Asia-Pacific all saw double-digit percentage drops. The company also announced that it's cancelling its Karma drone production and it is laying off 20% of its workforce.

The key point here is that GoPro needs something new to turn itself around and it's looking to licensing its reference designs for third-party devices to pull it off.

I don't have a crystal ball, but it's doubtful that this move will be enough to significantly boost GoPro's sales and earnings. The company's business is still primarily focused on selling cameras, so adding in a little licensing revenue isn't going to offset its plummeting hardware sales. Sure, it may be an easy way to add a little more to the top line, but it's not going to be enough.

At this point there's not much reason to be hopeful for GoPro. The company tried its hand at building out a software and content platform and failed. It tried to sell its own drone and then quickly exited the market. It makes great high-performance cameras and has built a strong brand, but even that hasn't been enough to convince customers to keep buying more cameras on a regular basis. It's tough not to ask: What else can the company really do?

The licensing move may not be a bad one, but it's not going to save the company. After all, if GoPro can't get its own customers to buy enough of its products, then why should we think that Jabil can convince them to buy third-party GoPro tech? If you're looking at GoPro's beaten-down stock and thinking it's a bargain, I'd strongly reconsider in light of the company's past failed moves and slowing hardware sales. The licensing deal isn't the turnaround catalyst you're looking for.