Please ensure Javascript is enabled for purposes of website accessibility
Log In Help Join The Motley Fool
Free Article Join Over 1 Million Premium Members And Get More In-Depth Stock Guidance and Research
By Jamal Carnette, CFA – Apr 9, 2018 at 8:15AM

If you have any money in a tech stock, however, it makes sense to follow Samsung's earnings. Here's what the South Korean company is saying about the industry.

Investors are looking forward to Samsung Electronics' (NASDAQOTH: SSNLF) earnings report later this month. Investors should expect strong returns, as the Wall Street Journal reports that Samsung will report record earnings, the fourth-consecutive quarter the South-Korean electronics conglomerate has done so. Unlike American companies, Samsung gives an early forecast after the end of each quarter.

Samsung is often compared to premium phone manufacturers like Apple and Alphabet. However, the truth is Samsung earnings are a better barometer for the entire technology industry, as the company also has a broad semi-finished component business, including LCD screens and memory chips. 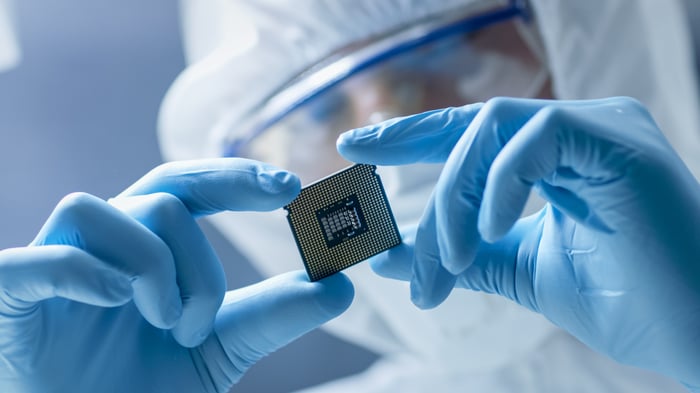 You'd think Samsung's encouraging announcement would be met with stock gains, but you'd be wrong -- in fact, shares sold off after the news. Here's why.

Recently, Samsung's earnings have been led less by its own smartphone business and more by its contributions to Apple's iPhone. In the fourth quarter Samsung's IT and mobile communications division only contributed 16% to the company's heavily watched operating profit.

Samsung continues to handsomely benefit from memory chips for the growing connected-device market, which includes Internet-connected smart speakers like Amazon's Echo Dot, Alphabet's Google Home, and Apple's HomePod; Samsung silicon has been reported in the first two. As more users adopt this new technology, Samsung's device solutions division will continue to be the biggest driver of returns.

By all accounts, Samsung knocked earnings out of the box. The company notes it expects operating profit to increase 58% from the year-ago quarter, growing its top line approximately 19%. The question, then, is why investors are reacting negatively to a positive earnings forecast. The issue isn't so much the forecast for the soon-to-be-reported quarter, but rather concerns the boom in Samsung's profit may be winding down in future quarters.

Chip analysts are particularly worried about the recent slowdown in memory prices, both DRAM and NAND, which after years of torrid price growth are under pressure amid falling smartphone unit sales.

Although Samsung benefits from smart speakers and other computing devices, smartphones are a large contributor to the company's bottom line, both its own units and those from supposed enemies. Last year it was reported that Samsung makes $110, or more than 10% of the sales price, from every Apple iPhone X unit sold, as it manufactures the screen and memory chips it supplies to its biggest smartphone competitor.

Additional concerns are related to trade, as the specter of trade wars, mainly between the two largest economies -- China and the United States. Apple is particularly exposed in the event of a trade war, as it sold approximately $45 billion of iGadgets in China last fiscal year.

Unfortunately, Apple doesn't report the number of iPhone units sold in the Middle Kingdom, but it's widely thought iPhone sales are the bulk of revenue from Greater China. Therefore, Samsung would be affected as well.

The takeaway for technology investors in Samsung earnings: Things are good now, but caution is warranted going forward.