Freshly public music streaming leader Spotify (SPOT 3.78%) is working on its own hardware. This we know. With the relentless rise of smart speakers, which is now one of the fastest growing consumer electronics categories, one would think that Spotify's first foray into first-party hardware would be a smart speaker. The Swedish company is also testing out voice search, a core piece of the smart speaker interface that could potentially pave the way for a virtual assistant.

Meanwhile, Spotify has recently sent out invites to a news announcement later this month, although it's not clear what the company is planning to unveil. It might not be a smart speaker. 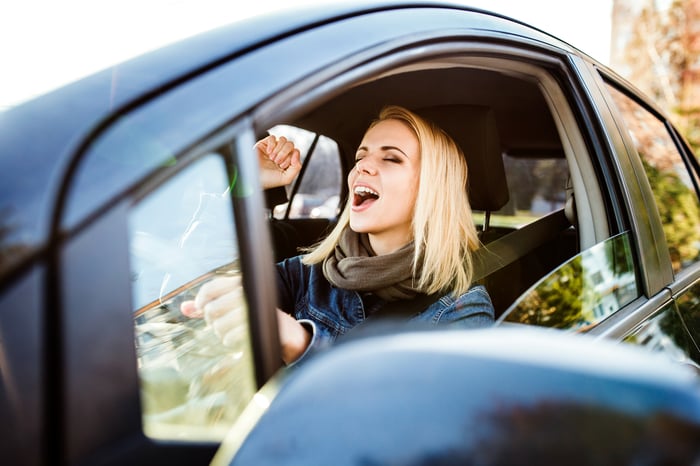 A Spotify controller for your car?

The Verge reported last week that some users in recent months had been receiving special offers that include a device that would allow Spotify to stream the service directly into cars. The bundle is priced at $13 per month and requires a 12-month commitment ($156 total). Other users reported seeing variations of the offer, some at $15 per month and some noted that the device included a stand-alone 4G LTE cellular connection, freeing it from relying on a tethered smartphone's cellular connection.

As far as the device itself goes, it looks like a circular puck that can be mounted on a vehicle's dashboard and includes some physical controls. Songs and other information are displayed on a front-facing display, and the product image suggests that it supports voice controls.

Why this rumored device makes sense

While a Spotify smart speaker still seems inevitable, developing such a product would take much more time since Spotify would need to build out smart-home functionalities to be competitive with current smart speakers. Behind listening to music, smart-home use cases are the second-most popular use case for smart speakers.

Meanwhile, Spotify enjoys various levels of integration in certain vehicle models like the BMW 7 Series, Volvo XC90, and Tesla Model S, among others. Spotify is integrated directly into some vehicle infotainment centers, but it relies on streaming from the mobile app in other instances.

Given how much people listen to music in their cars, it makes perfect sense that Spotify could be trying to strengthen its automotive position -- particularly in a way that delivers the service through an accessory. While direct integration would be ideal, automotive design and upgrade cycles are extremely long. It sounds like the rumored device could be quite affordable, too -- just $36 to $60 when excluding the price of the service from the bundles.

The April 24 announcement may or may not have anything to do with this product, but we'll find out soon enough.