The industry is as healthy as it's ever been, which is a problem for its most prominent brewer.

The death of craft beer seems to have been greatly exaggerated. The industry trade group Brewers Association says craft brewer volumes rose 5% in 2017 while the overall beer industry fell 1% -- meaning craft accounts for 12.7% of all production -- and craft's dollar value jumped 8% to $26 billion, accounting for 23.4% of all money spent on beer.

With almost 6,300 craft brewers operating in the U.S., more than at any other time in the country's history, it looks as though the industry remains on a sustained growth track. And that should be of great concern to Samuel Adams brewer Boston Beer (SAM -2.57%). 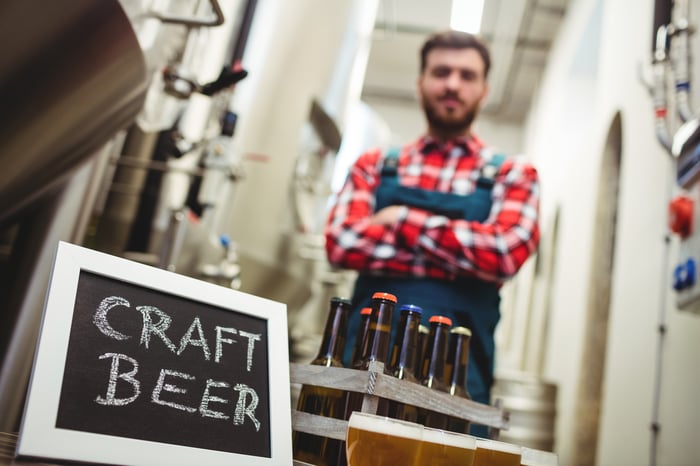 The changing face of craft beer

Having existed for decades, craft beer is a mature market. The trade group's chief economist Bart Wilson says that has led to a shift: "Beer lovers are trending toward supporting their local small and independent community craft breweries. At the same time, as distribution channels experience increased competition and challenges, craft brewer performance was more mixed than in recent years, with those relying on the broadest distribution facing the most pressure."

That applies directly to Boston Beer, which is the second largest craft brewer behind D. G. Yuengling & Son, but whose star turn as the face of the craft beer industry is quickly fading. It's seeing gains from its Twisted Tea brand and Truly sparkling seltzer, but the stuff a brewer should see growing -- you know, beer -- continues to decline.

Boston Beer's overall depletions, which is an industry benchmark for demand based on sales to distributors and retailers, dropped 5% in 2017 and has now declined for nine consecutive quarters. Depletions for its flagship Samuel Adams brand are faring much worse, declining for 12 consecutive quarters.

Back in 2011, the Brewers Association raised the threshold to qualify as a craft brewer from producing under 2 million barrels a year to under 6 million as a nod to Boston Beer, which was rapidly growing at the time and had just surpassed the lower mark. Now it seems the brewer is heading back in the other direction. Last year, it produced 3.7 million barrels, down from 4 million the year before and 4.2 million in 2015. 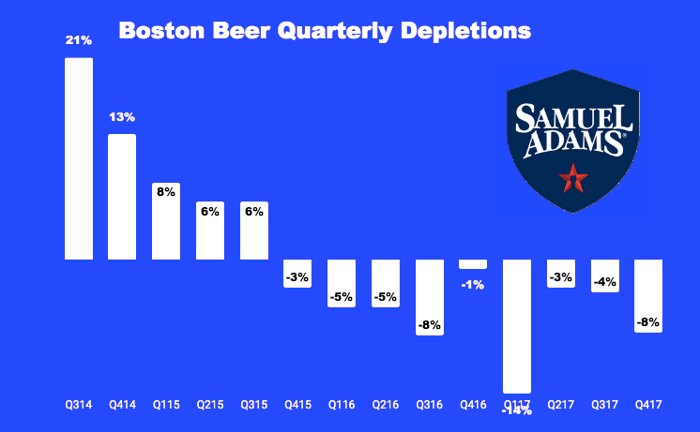 Even Boston Beer acknowledges there is too much competition in the industry. As the Brewers Association figures show, craft brewers continue to multiply at exponential rates. A decade ago there were just 1,500 breweries in operation, meaning they've increased fourfold in that time span.

Boston Beer's problem is that it is too big for many to consider it a true craft brewer, but too small to run alongside the mega brewers like Anheuser-Busch InBev (NYSE: BUD) and Molson Coors (NYSE: TAP), which despite their falling numbers still account for almost 70% of all the beer sold in the United States.

While it has resisted the movement so far, many believe there are only two choices for Boston Beer if it wants to grow again: follow the path set by Anheuser-Busch and begin acquiring smaller craft breweries, or be acquired itself.

The brewer has taken a number of actions intended to turn the tide, but most are cosmetic in nature, including changing the packaging on Samuel Adams. More recently it embraced trends, like introducing a New England-style IPA, but being a follower rather than a trailblazer isn't what helped Boston Beer establish itself in the first place. (Though one could say its new Sam '76 lager and ale combination, which will be available nationwide in 2018, did test new ground.)

Although Boston Beer has done much to make the ground fertile for the expansion of the entire craft beer industry, its continued growth may be worrisome for this particular brewer's continued healthy existence.