Walmart's (NYSE:WMT) aisle-scanning robots, which have been undergoing testing at a handful of locations, are headed to 50 stores. The big-box retailer likely won't see any immediate benefits, but investors could have a lot to be happy about with the expanded trials.

What the robots do

The robots, developed by start-up Bossa Nova Robotics, have a simple task that has nothing to do with jazzy Brazilian music. The machines autonomously navigate around stores and scan shelves with a tower fitted with cameras.

After gathering and processing the data, the robot will then inform a store associate if an item needs restocking, if tags are missing, or if prices are marked incorrectly. The idea is to automate tedious shelf-auditing tasks that employees may not have time for. 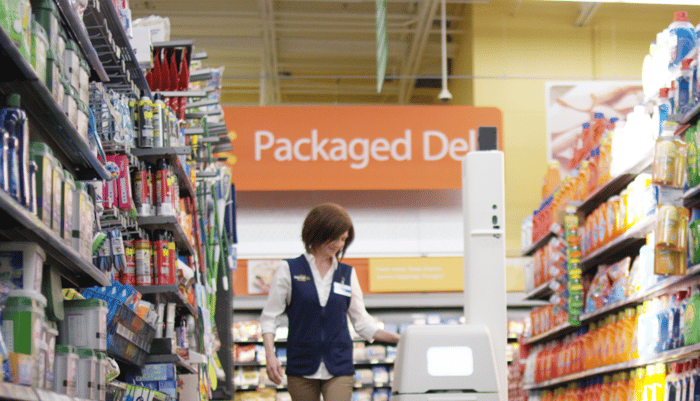 The retailer says no employees are losing their jobs over this move. That's probably accurate at this point as the robots are still in the test phase. But why would Walmart shell out extra money "hiring" a workforce of machines if it doesn't plan to lay off any humans?

Walmart says store employees have time to scan shelves only about twice a week. That monotonous task can be delegated to the machines, which Walmart says can do the work quicker and more accurately than humans. That frees up time for store associates to keep shelves stocked and help customers, which does make the company money.

Keeping inventory priced correctly is also important, as is making store operations smarter and more efficient. Data is powerful, and can help traditional stores optimize their operations. In Walmart's case, the robots are part of a broader effort to beat back digital retailers like Amazon, which employs thousands of robots at its warehouses to assist with order fulfillment.

It remains to be seen if a deal with Bossa Nova Robotics actually makes money for Walmart, or if the world's largest chain is still trying to play catch-up to the tune Amazon is singing. However, besides robotically enhanced retailer stocks, there's another way for investors to take advantage here.

Technology is infiltrating the economy as a whole, and robotics in retail is just one example. According to technology researcher McKinsey & Company, things like optimized store layouts, self-checkout, and "smart" customer relationship management could have an annual impact of up to $1.2 trillion by the year 2025. Rather than picking which traditional store will weather the storm the best, investing in tech companies is the best route to take.

As noted above, Bossa Nova Robotics is still a start-up, but other robotics manufacturers that investors can buy include FANUC and ABB. Then there are the chipmakers that make robotics possible. Ambarella, for example, makes chips enabling computer vision -- a technology crucial to some robotics applications that tries to mimic the human eye. All of that collected data also needs to be processed, so cloud computing investment is another option. Cloud computing provider VMware is a partner of Bossa Nova Robotics in helping retailers optimize their businesses with technology.

While Walmart's new robots and other digital transformations could help the retailer remain relevant in today's world, investors looking to cash in on the trend should look to the robots themselves, or more specifically what's inside them.