The robot revolution has arrived!

While industrial robots have been used to increase the efficiency of factories for decades, growth in this category has recently revved up, thanks to technological advances. The market expanded 18% in dollar value and 16% in number of units sold in 2016, according to the International Federation of Robotics, with the IFR forecasting an average of 15% annual growth in units through 2020.

A Jetsons-like Rosie, who will do all your housekeeping, isn't here yet, but sales of consumer robots that perform specific tasks, such as vacuuming, have taken off in recent years. In the professional service realm, robots are increasingly being used to perform surgery -- an application pioneered by Intuitive Surgical -- while new uses continue to emerge.

Growth in robotics promises to accelerate as artificial intelligence (AI) is increasingly used to "smarten" up robots.

There are various ways to play the rise of the robots, including investing in companies that are poised to benefit from increased use of them (think Amazon.com and its fulfillment center network). Our focus here, however, is on companies that make robots or components that go into them and that are at least close to pure plays on automation. 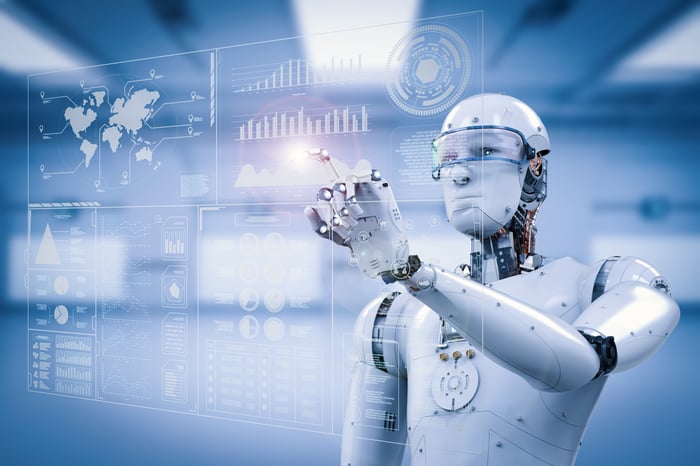 Here's an overview of the companies and their stocks.

Data sources: YCharts and Yahoo! Finance. *PEG is the price-to-earnings ratio divided by earnings per share (EPS) growth over the trailing-12-month (TTM) period. Data as of Jan. 19, 2018.

There's reason to believe these companies could grow earnings faster over the next five years than Wall Street is projecting. iRobot and Cognex have been regularly cruising by analysts' estimates. FANUC is based in Japan and trades over the counter (OTC) in the U.S., so analyst coverage in the U.S. is very light.

FANUC is a pure play on industrial automation and targets a wide range of industries. The company is the top dog in the industrial robot space in the U.S, and perhaps No. 2 globally, behind Switzerland's ABB. (Market share stats vary by source.) It has locations around the world, including a big presence in the Detroit area, as the company does much work for automakers.

To keep up with growing demand for automation of factories and other types of facilities, FANUC is planning to open a new factory in August 2018 that will ramp its robot production capacity from 6,000 to 11,000 units per month. Given these plans, it might not be surprising that sales are booming. In the first half of its fiscal year ended in September, FANUC's revenue jumped 35.2% and net income soared 42.5% year over year, indicating an expanding profit margin.

The company had $7.3 billion in cash at the end of the last quarter and a manageable debt-to-equity ratio of 16.4%. FANUC sports a profit margin of 24.4% for the trailing 12 months, which is far superior to the other big players in industrial automation: ABB, Japan's Yaskawa, and Germany-based KUKA, which is now nearly 95% owned by a China's Midea Group, have profit margins of 7.8%, 6.6%, and 2.5%, respectively.

Cognex -- whose name is derived from "cognition experts" -- specializes in making machine-vision systems used to automate factories, warehouses, and distribution centers. So like FANUC, it's a play on industrial automation. It can also be thought of as play on the fast-growing consumer electronics industry; in its most recent quarter, revenue from this market was a "substantial contributor to growth" both year over year and sequentially. Outside of electronics, year-over-year revenue growth was strong across geographic regions and in many industries, including automotive and logistics. 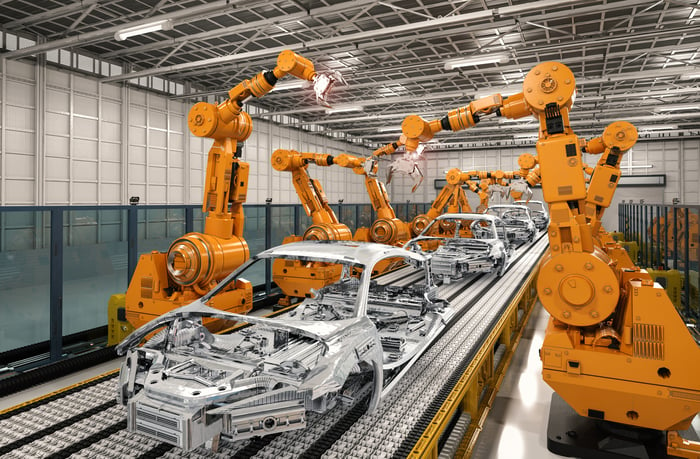 Cognex doesn't have the name recognition of the hot tech stocks, probably because it's a component maker and lacks the "sexy" factor. However, its financial performance could make even a robot's heart start pumping. In the third quarter, revenue surged 76%, operating income soared 102%, and EPS jumped 87% from the year-ago period. Cognex has a substantial cash stash and no debt.

Like iRobot, Cognex is based in the Boston area, which isn't just a coincidence. Beantown has a reputation as a robotics hub, thanks largely to being home to the Massachusetts Institute of Technology (MIT). The founder of Cognex and the founder-CEO of iRobot are MIT-educated.

iRobot is best known for its Roomba vacuuming robot, though it also makes other cleaning bots. The company is developing a robotic lawn mower, and other task-specific robots are likely on the horizon. The stock is the only pure play on consumer robotics trading on a U.S. exchange.

In the third quarter, iRobot's revenue increased 22% year over year, powered by 34% revenue growth in the U.S. Adjusted for one-time factors, earnings per share (EPS) declined 26%. This drop didn't stem from gross margin falling, which would be worrisome because that often indicates pricing pressure. The decline was driven by iRobot ramping up its spending on research and development (R&D) and on sales and marketing to help fuel its continued growth. The company is in good shape financially, as it had $241.8 million in cash and no debt at the end of last quarter.

Competition in the fast-growing robotic vacuum space has been intensifying, with SharkNinja the main competitor to watch. In September, the privately held appliance maker launched a competitively priced product. It remains to be seen how successful competitors will be at sweeping away market share from iRobot, which remains dominant in the market, thanks to it constantly improving its products. There's likely room for several players because the total addressable market is still largely untapped: U.S. household penetration of robotic vacuums is less than 10%, and international penetration is even lower, according to iRobot.

There's something to like about FANUC, iRobot, and Cognex, though the latter is probably my favorite of the group. It has a robust long-term projected EPS growth rate of 27.4% combined with an attractive valuation relative to its earnings growth -- a PEG of 0.6 is low. iRobot is likely the riskiest of the trio, as it probably has the weakest moat.