In 2019, Apple (NASDAQ:AAPL) is expected to release a new Mac computer targeted at professional content creators and other power users under its Mac Pro branding.

Apple last introduced a new Mac Pro back in late 2013 and hasn't significantly updated the machine since. 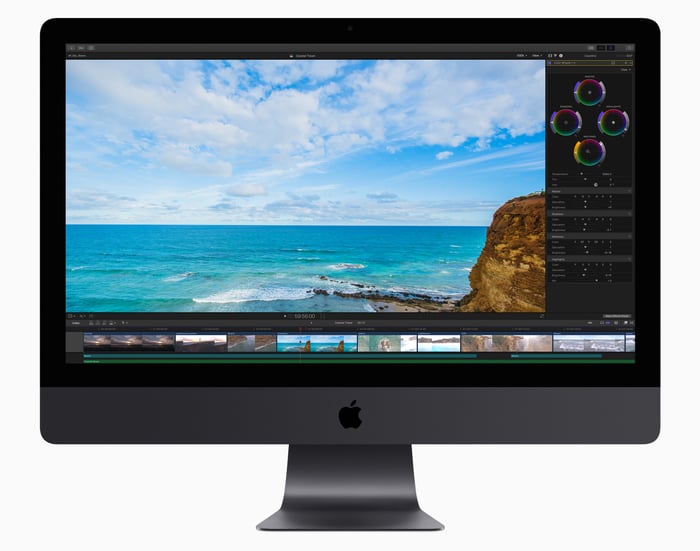 The company's 2019 Mac Pro is, of course, going to represent a huge upgrade from the current, practically antiquated Mac Pro, and should be substantially more powerful than the company's current iMac Pro all-in-one computers, too.

Here are three things to expect from the updated machines.

Apple's current iMac Pro computers use Intel's (NASDAQ:INTC) Xeon W processors, based on the latter's Skylake architecture. The chips are manufactured using Intel's 14-nanometer+ technology and come in configurations with up to 18 processor cores.

Since the new Mac Pro is likely to launch in 2019 (likely the second half of 2019, to boot), I expect that the new machines will incorporate future Xeon processors based on Intel's Ice Lake architecture.

The new Ice Lake chips are expected to be manufactured using Intel's 10-nanometer+ technology, which should deliver a substantial boost in power efficiency and reduction in chip area, and they're also expected to sport an all-new processor architecture with performance, efficiency, and feature enhancements.

Apple's iMac Pro lineup incorporates Intel's highest-end Xeon W processors, which are designed to be used in systems with a single processor. I expect that future iMac Pro computers will continue to use Xeon W processors, and that the Mac Pro will support up to two future Xeon processors in the same system, for added performance in processor-intensive workloads.

Navi is expected to incorporate design enhancements to boost performance and efficiency, and to be manufactured on a much more efficient 7-nanometer chip manufacturing technology (Radeon Vega parts are manufactured using GlobalFoundries' 14-nanometer technology).

Moreover, I expect that the new Mac Pro will support full add-in cards (and it'll likely even come in configurations with multiple such cards, for very-high-end graphics work), so the next Mac Pro should be able to support future graphics cards from AMD as well.

If Apple is going to keep the iMac Pro around while also offering the Mac Pro, it seems reasonable to expect that the Mac Pro will be positioned as a premium product relative to even the pricey iMac Pro.

These will be incredibly niche products targeted at true professionals (consumers who dabble with professional apps could be better off with an iMac Pro). For Apple's sake, I hope the company reads the requirements of these professional users properly and builds a system just for them.