Maybe the third time is the charm. T-Mobile (TMUS -2.40%) and Sprint (S) are back at the negotiating table after merger talks fell apart for the second time back in November, according to The Wall Street Journal. The previous negotiations stalled because of a dispute over who would control the combined company.

Over the last five years, T-Mobile and Sprint have combined to put pressure on their bigger competitors, AT&T (T -0.96%) and Verizon (VZ -1.60%), through pricing promotions and customer-friendly moves like separating equipment and service billing or reviving unlimited data plans. If the two companies combined, it could reduce the competitive pressure in the industry, which would be a positive for investors across the board.

Before anyone gets too excited, investors should be aware that not only do T-Mobile and Sprint have to agree to terms, but the FCC would have to approve a merger. Regulators under the Obama administration objected to a T-Mobile and Sprint combination four years ago, but many expect the Trump administration to be more lenient. That said, AT&T is facing a lawsuit from the Department of Justice over its proposed acquisition of Time Warner, so nothing is certain. 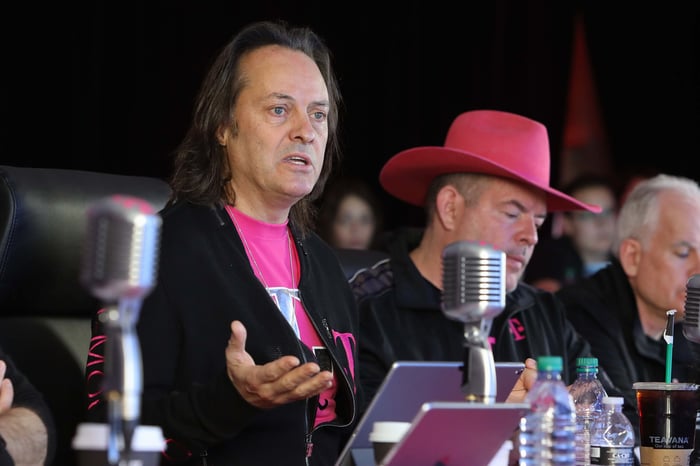 T-Mobile CFO Braxton Carter has noted the company's biggest disadvantage is its scale, or lack thereof. AT&T and Verizon have around 100 million branded customers each, but T-Mobile has just under 59 million branded subscribers and Sprint has just 41 million.

Combining the two companies would allow it to leverage their high fixed costs and produce much stronger operating margins over time. That won't happen overnight, but Carter has said the company expected to realize about $37 billion in synergies, mostly by putting all those customers on a single network. Considering it's only been a few months since the previous round of talks fell apart, most of those synergies should still be there.

The two companies would also benefit from a broader retail footprint, an area in which T-Mobile is aggressively investing. It currently plans to build out stores to expand its reach to about 320 million people, matching its network coverage. A merger with Sprint will still require T-Mobile to build out new stores in most greenfield markets, but it can move Sprint or T-Mobile stores that overlap each other to new locations.

The scale of a combined T-Mobile and Sprint would allow the company to produce much stronger margins for investors than either company does separately. And without the need to aggressively grow subscribers to reach scale, competitive pressure should ease, enabling profit margin to increase across the industry.

Sprint holds a lot of valuable 2.5 GHz spectrum, but with its weak free cash flow, it's been slow to deploy those licenses. Sprint is currently relying on cash from Softbank (NASDAQOTH: SFTBY), which owns around 85% of Sprint, to build out its network using the 2.5 GHz spectrum.

In 2017, Sprint produced free cash flow of just $790 million. By comparison, T-Mobile generated $2.7 billion in free cash flow last year, and management expects that number to grow to between $4.5 billion and $4.6 billion next year.

That means that T-Mobile is already producing the cash required to deploy Sprint's spectrum licenses, which can be used both to increase the density of the 4G LTE network or build out a 5G network. Those licenses could also be used to support the burgeoning Internet of Things market. That would give the combined company the network strength to compete with Verizon and AT&T in more rural markets.

Wireless investors should be cheering on all sides

Sprint and T-Mobile certainly stand to gain from the combined scale and synergies the two could realize if they merge, but Verizon and AT&T investors will benefit as well.

Verizon is just starting to turn around its service revenue after years of pricing pressure from Sprint and T-Mobile led to significant declines. AT&T expects to follow suit later this year. And less competition means that carriers won't have to invest as much in marketing and promotions to attract and retain subscribers, so operating margins improve as well.

If you're invested in wireless carriers, you're hoping the third time's a charm for T-Mobile and Sprint, regardless of which carrier you own.