We look at three themes management wants investors to follow in fiscal 2018.

Organic revenue continued to remain solid. Removing currency effects, revenue increased 14.6%, and non-acquired sales accounted for 2.2 percentage points of the total improvement. As we look ahead to the remainder of the new fiscal year, I've chosen three pertinent quotes made by CEO Lawrence Kurzius during the company's earnings conference call on March 27. These comments illustrate important themes for investors to follow over the next three quarters:

1. Following through on its RB Foods rationale

We're increasing the fuel to drive Frank's Red Hot. Despite being number one in hot sauce, we believe there remains significant upside for Frank's in awareness, trial, and household penetration. We will strengthen working media and regional programs behind a proven irreverent campaign to build awareness and trial.

Yet management believed that it could exploit latent potential in RB Food's brands, as its transatlantic owner, a nonfood company, had perhaps neglected to fully invest in labels like Frank's RedHot, French's, and Cattlemen's barbecue sauce (which is sold primarily in the food service industry).

Frank's may hold the No. 1 position in the U.S. hot sauce market, but McCormick believes fervently that it has much room to grow. Management asserts that Frank's is underrepresented on store shelves, and is working to improve its real estate alongside competing brands. It's also extending Frank's into avenues beyond its traditional bottled liquid format, as you can see below. 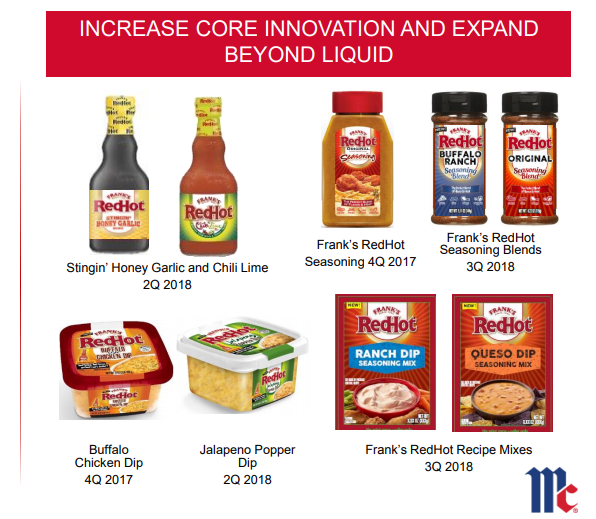 The company is similarly putting resources behind French's mustard, increasing media spends, expanding its grocery shelf footprint as well, and introducing new flavors. In the second quarter of 2018, French's will debut a new honey mustard dipping sauce, and an upscale "stone ground" Dijon mustard. McCormick is intensifying marketing centered on the product's natural credentials. The company wants consumers to be aware that French's consists of only a few natural ingredients, including distilled vinegar, water, mustard seeds, and paprika. Consumers are likely to encounter French's marketing tag-line more frequently in 2018: "The only artificial ingredient is the bottle."

Innovation and increasing scale deliver on the promise of RB Foods: As McCormick broadens out these acquired products, the transaction purchase price is looking much more reasonable.

2. The industrial segment is getting a makeover

McCormick Flavor Solutions is a culinary inspired flavor business. We have deep understanding of the consumer experience of flavor from real food and natural ingredients and leading technology that delivers consumer-preferred solutions for our customers. We are not a bulk herb and spice or commodity business. We are one of the top global flavor suppliers to the food industry today.

McCormick's sales to institutions make up 38% of total company revenue and generate roughly 28% of operating income. The company announced in February at the Consumer Analysts Group of New York (CAGNY) conference that it's renaming this business, formerly known as the "industrial" segment, as "McCormick Flavor Solutions."

The identity revamp seems to more clearly identify the segment's strengths. Combining research and development expertise with its background in spices, the commercial side of McCormick's business assists packaged food corporations with a wide range of flavor services, including coating systems, natural extracts, condiment supplies, and compound flavors. These find output in every conceivable delivery format, from sweetened beverages to savory packaged soups.

The growth of natural, organic, and "clean label" packaged foods in particular represents a growth area for McCormick, as a burst of independent food brands has forced giant consumer packaged goods (CPG) companies to reformulate traditional ingredient structures. PepsiCo (PEP 1.13%) has established itself as a leader among CPGs in ingredient reformulation, having expanded its "better for you" offerings in its Frito Lay North America snacking division over the last few years.

As I discussed last fall, PepsiCo is seeking to expand clean label products as far as the shelves of natural grocers such as Amazon.com's Whole Foods Market. In McCormick's recently released 2017 annual report, it revealed that for the third consecutive year, PepsiCo was Flavor Solutions' largest customer. Sales to PepsiCo accounted for 11% of McCormick's total 2017 revenue of $4.8 billion, equaling the consumer segment's sales to its largest customer: Walmart.

But this type of partnership isn't confined to PepsiCo. Flavor Solutions claims to work with the "top 10 packaged food and beverages companies," thus the CPG industry shift toward natural ingredients should continue to push results at Flavor Solutions in the near future. 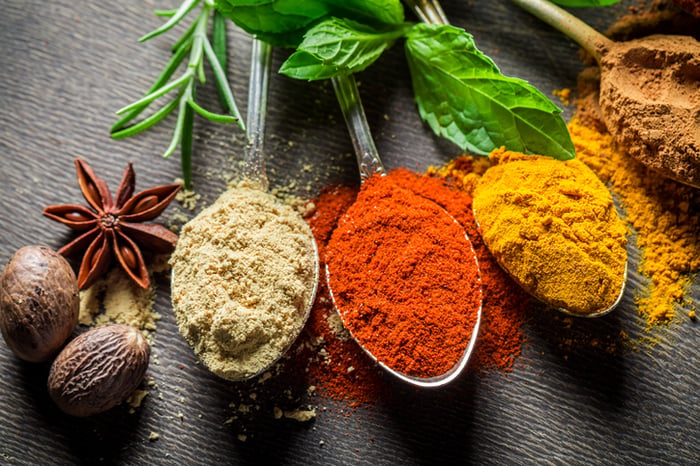 3. Now is the time to continue a trimming exercise

I don't want to miss the fact that there's been portfolio migration. We've had great growth in the high margin end of our business and we've actively discontinued some low margin business. We have a strong overall growth rate this year. So, we're taking advantage of that too. We'll use this as an opportunity to get rid of some low-margin business, which has a slight dampening effect on the sales line, but which really runs through.

The quote above is in response to an analyst's question on McCormick's ability to keep expanding margins, which have received a lift from the RB Foods acquisition.

Management is keen for investors to understand that it's worked on improving margins on several fronts well before the acquisition. Over the last two years, McCormick has exited its joint venture in South Africa and discontinued unprofitable bulk-packaged and broken basmati rice product lines within its Kohinoor brand in India.

As Kurzius suggests, the company has also shifted resources to higher-profit categories. This trend is clear in the Flavor Solutions segment, where operating margins have increased from 8.3% to 11.9% in the last three fiscal years.

While the fiscal year 2017 operating margin of 11.9% does include a boost from the RB Foods transaction, the segment has benefited from a movement away from the slimmer margin categories of custom condiments, coatings, and ingredients, to the higher value-added categories of branded food service and flavorings.

Together, higher revenue, smart category management, and cost-cutting (through the company's "Comprehensive Continuous Improvement" productivity initiative) are providing a period of margin expansion for McCormick & Company. Management believes that this type of growth phase is the ideal time to double down on the weeding out of lower-value revenue streams. Investors can expect to see more of these activities as the current fiscal year continues.