Even as the restaurant holding company's shares recover, it's important to be aware of key risks going forward.

In February, DineEquity, parent of Applebee's Neighborhood Grill and Bar and IHOP Restaurants, changed its name to Dine Brands Global, Inc. (DIN 2.69%) to better reflect its vision of itself as a global franchise holding company. Perhaps more accurately, the name describes the company's aspirations, as just 3% of its 2017 revenue were derived from international sales. Given the turbulence in its business in 2017, is it safe for investors to hold Dine Brands stock, and aspire to future stock price returns?

Dine Brands' troubles stem from the deterioration of the Applebee's franchise, which is attempting to reinvent itself after years of losing relevancy with customers. Last year, systemwide sales declined nearly 7%, and on a net basis, the company closed 80 restaurants. Management expects to open between 10-15 new restaurants this year, while closing between 60-80 restaurants. At the midpoint of each range, it will close roughly 58 locations on a net basis in 2018. With this general backdrop, let's look closely at risk areas for prospective shareholders. 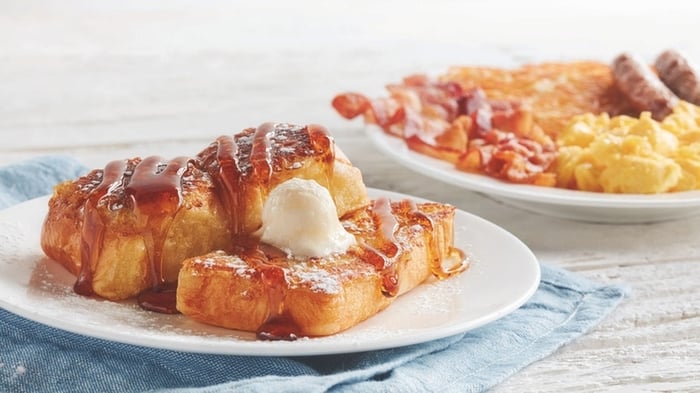 The condition of Dine Brands' balance sheet presents the highest potential pitfall for investors. As of its most recent balance sheet date, at year-end 2017, the company sported a healthy current ratio of 1.33, with current assets of $395.6 million versus current liabilities of $295.7 million. Longer-dated borrowings are a problem, however, as the company's total long-term debt of $1.3 billion is nearly six times annual EBITDA -- a multiple which typically signals an overleveraged company.

Indeed, Dine Brands presented a chart at its annual investor day conference in February that presented the same view. Below, the company lines up its own debt to EBITDA versus competitors, primarily from the quick-service restaurant (QSR) side of the industry: 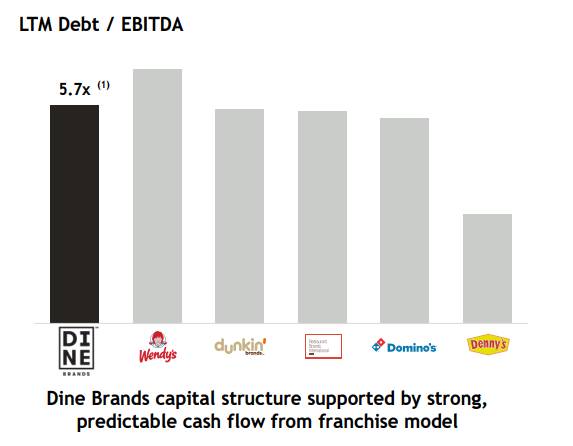 The only hitch in this logic is that the peers shown above all have strong margin and revenue growth trends in place. Conversely, Dine Brands is still in the midst of its attempt to stabilize the Applebee's franchise. Last year, Dine Brand's gross margin declined 10%, to $341.6 million. Management attributed $29 million of the nearly $38 million in gross profit deterioration to Applebee's "franchisee health issues." These issues included higher bad debt expense from struggling franchisees, additional funds the company had to pour into Applebee's national advertising fund, and lower royalty revenue due to franchisees' diminished sales.

Declines in gross profit margins can be dangerous, since gross margin dollars cover the fixed costs of selling, general, and administrative expenses. You can see the effect of slimmer profits on the company's operating cash flow -- it declined last year by 44% to $65 million, which wasn't even enough to cover the company's $69 million in dividend payments.

In essence, Dine Brands' high leverage presents a caution flag which shareholders shouldn't ignore. Waning cash flow from weak margins can impair a company's ability to make principal and interest payments on debt, and Dine Brands' ability to service its debt has diminished over the last several quarters.

The company's debt service coverage ratio (DSCR), which measures the number of times net cash flow can "cover" annual debt service, has declined from 5.4 times to 4.0 times over the last two years. On a positive note, that's still above levels required by Dine Brand's lenders in their debt covenants, which impose a minimum DSCR of 1.75 times.

To provide some breathing room for operating cash flow (and thus debt service coverage), Dine Brands slashed its quarterly dividend by more than a third in February 2018, to $0.63. And in September 2018, "make whole" provisions on the company's $1.3 billion in long-term debt will expire, meaning that Dine Brands will have an opportunity to refinance the portfolio, currently bearing an interest rate of 4.3%, without penalty.

Dine Brands' risks should be recognized -- but they aren't prohibitive

Dine Brands' management is working through a comprehensive strategy to revitalize Applebee's, focusing on everything from decor to menu innovation to data analytics to drive increased visits from its core customers (which tend to be older and more value-driven than the company's IHOP customer cohort). In this stabilization period, net restaurant unit growth isn't expected to resume until 2020.

Shareholders will likely be satisfied simply to see improvement in comparable sales in the next two years, as this will boost gross margin. The closure of 80 units last year and perhaps as many this year will certainly help. In the fourth quarter of 2017, Applebee's comparable sales actually increased by 1.3%, but this result was against a prior-year comparable sales figure of negative 7.2%, so progress was minimal. Yet it's a sign that at least the "comps" bleeding may be over.

So, as long as Applebee's continues to show stabilization from quarter to quarter, debt service capability and margin improvement are both in the cards. Against this transition of Applebee's toward greater market relevance, IHOP is faring comparatively well. The IHOP segment is benefiting from higher industry sales during breakfast hours and growing interest from millennials: Nearly one-half of its customer base is below the age of 35.

IHOP has managed to expand revenue at a credible compounded annual growth rate, or CAGR, of 3.1% over the last five years. According to the company, this is twice the average growth rate of family dining peers. As Applebee's shuts down losing units, IHOP will open approximately 60 new locations on a net basis in 2018. Certainly, buying shares in Dine Brands Global today entails risk, but if Applebee's can attain the same gradual, linear growth of IHOP within the next two to three years, such risk may provide for a decent investment payoff.