These companies offer the highest dividend yields of all the companies in the S&P 500. Are they worth owning?

The S&P 500 is comprised of some of the biggest American companies, including more than a few that pay substantial dividends. But just because a company is part of the S&P 500, it doesn't make its dividend a surefire bet or guarantee that it's going to make for a profitable investment. As a matter of fact, a super-high dividend yield can be a sign that the company might be getting ready to cut the payout.

Let's take a closer look at the 10 highest-yielding dividend stocks in the S&P 500. Some are sure to be buy-worthy, but if you can avoid the ones that could be dividend traps, it will make a big difference in your portfolio's returns.

Dividend yield as of closing prices April 6, 2016. Table by author.

The highest-yielding and lowest-yielding stocks on this list -- CenturyLink and AT&T -- are both telecoms. But while AT&T's dividend is rock-solid and has regularly increased every year for a decade, CenturyLink's payout has been substantially higher than its earnings for multiple years, has already been cut once in the past decade, and could get cut again if the company can't start generating more earnings than it pays in dividends: 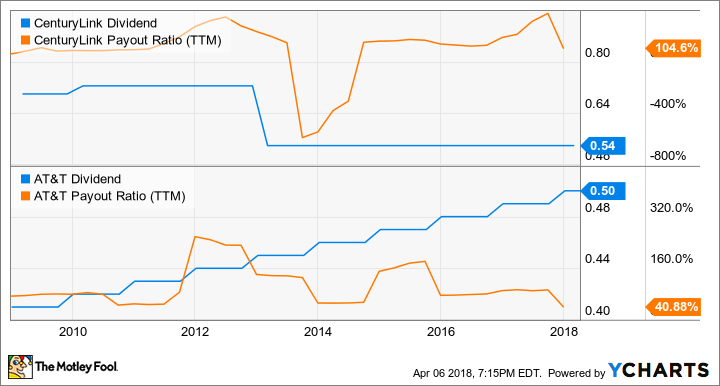 Does that make CenturyLink a no-go and AT&T a surefire buy? Well, it depends on what you're looking for and your risk tolerance. If it's a dependable high yield with a solid chance for regular increases, then AT&T is the way to go. Its 5.5% yield is double the market average, and its low payout ratio, decent prospects for modest growth, and management's commitment to the dividend make it ideal if you want a predictable payout.

On the other hand, if you're willing to take on some risk (as I have) to potentially capture a double-digit yield, then CenturyLink deserves a look as a high-risk, high-reward investment. Just bear in mind that the entire thesis hinges on management successfully delivering on the cost-savings and cash-flow growth from its integration of Level 3 Communications, which it acquired last year. Management says the company will be free cash flow positive after paying the dividend in 2018, a major milestone that would be huge in protecting the payout. Furthermore, the company continues to project $975 million in adjusted EBITDA -- earnings before interest, taxes, depreciation, and amortization -- synergies over the next several years.

And there has been some modest progress since the Level 3 merger, but at this stage, an investment in CenturyLink is heavily weighted on promises and could turn out to be a yield trap if management fails to deliver.

A retail real estate opportunity and a struggling retailer to avoid

Real estate investment trust -- REIT for short -- Kimco Realty is one of the biggest owners of shopping centers in North America, and the fears of a brick-and-mortar retail collapse has sent its stock price down by a third. However, traditional retail is alive and well in the U.S. despite all the big-name closures that dominate the headlines. According to an IHL Group study, traditional retail sales -- and store counts -- are actually increasing while a handful of struggling retailers have driven the narrative.

That's not to say things are perfectly rosy: -- Kimco sold 21 shopping centers in the first quarter for $220 million and aims to sell off another $700 million worth this year -- its core business continues to perform well and is comprised of tenants that are relatively resistant to e-commerce disruption.  According to its fourth-quarter earnings presentation, 74% of its average base rents (ABR) comes from grocery-anchored centers, more than half of its tenants provide either a service or experience, and 40% of its ABR comes from tenants with an omni-channel business. Furthermore, it only has one tenant -- TJX Companies at 3.7% -- which accounts for more than 2.5% of its ABR, which substantially reduces its risk of losses if a single large tenant folds.

At 12 times 2017 funds from operations, Kimco is very reasonably priced, and its 7.7% dividend yield is probably much safer than it might seem.

On the other hand, L Brands, owner of Victoria's Secret and Bath and Body Works, is a retailer that has struggled. The company reported a 4% decline in same-store sales in 2017 and closed nearly as many old stores as new stores opened. This realigning of its retail footprint has been an expensive undertaking that's weighing on the company's cash flow. Its GAAP payout ratio -- the percentage of earnings required to cover the dividend -- looks relatively OK at 70%. But when we compare that to the cash payout ratio, the math isn't nearly as good:

My concern is that L Brands will need to continue spending cash to close underperforming locations while simultaneously investing in new locations, burning a lot of cash to generate modest -- if any -- sales growth. The company won't be able to sustain a dividend that exceeds cash flow, so I'd want to see its cash payout ratio fall substantially before investing in the company. Simply put, the dividend would be the first thing likely to get cut to preserve cash, and that makes L Brands a higher-risk stock for dividend investors right now.

Short-term fears, but a long-term trend

Rising interest rates aren't good for companies that rely on a lot of debt, which most REITs do. Here's what has happened with interest rates over the past few years: 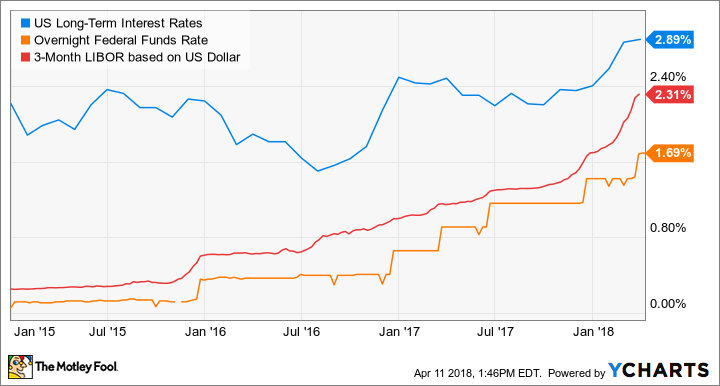 In short, this has spooked plenty of investors out of companies that use a lot of debt. But I think it's also created some opportunities as well, since rates are still well below historical averages: 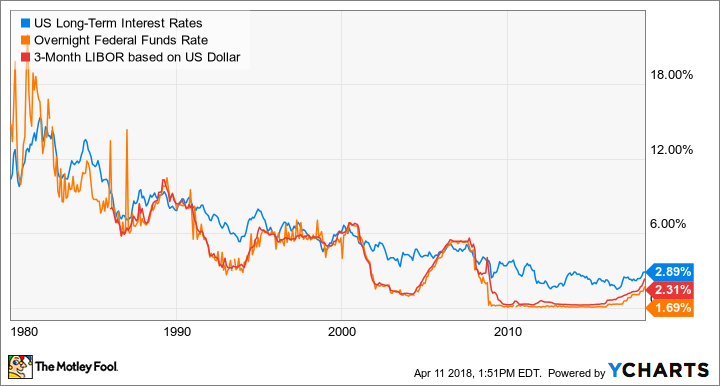 HCP, Ventas, and Welltower are healthcare REITs, owning hospitals, medical office buildings, skilled nursing, rehab, and research facilities. All three have struggled with short-term challenges over the past couple of years. HCP, for instance, is in the process of shifting its portfolio away from senior housing -- specifically reducing its nursing home portfolio, which has struggled in recent years, -- and is investing heavily in medical research facilities. HCP's struggles in this segment, which still makes up 40% of its portfolio, caused it to cut its dividend back in 2016.

Welltower, on the other hand, is putting even more emphasis on senior housing, particularly for seniors with Alzheimer's or other forms of dementia. Over the next 20 years, the number of Americans 80 and older will nearly double, and a high percentage of this age group suffers from dementia. While higher interest rates have affected Welltower recently -- though it's working to pay down its debt to lessen the impact -- it is one of the best-positioned REITs to benefit from the long-term aging trend.

Ventas spun off its nursing home segment a few years back and was able to avoid the recent nursing home downturn that affected Welltower and HCP's profits, having instead focused on senior housing -- think independent and assisted living -- facilities that have become increasingly more in demand over the past decade. This is a key reason why Ventas has increased its dividend about twice as much as Welltower over the past decade, while HCP's is at a 10-year low after the 2016 cut: 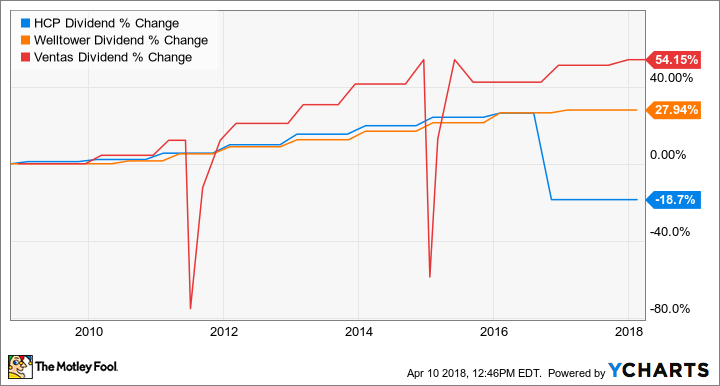 Looking ahead, I would favor Welltower and Ventas over HCP. While HCP's move into research facilities could pay off big, its history of execution isn't as solid as either Welltower or Ventas, so I'd err on the side of past execution by management versus the potentially better upside for HCP.

Lastly, there's Iron Mountain. Since becoming a REIT in 2012, the company has increased its dividend 135%, a far higher rate than its cash flow has increased: 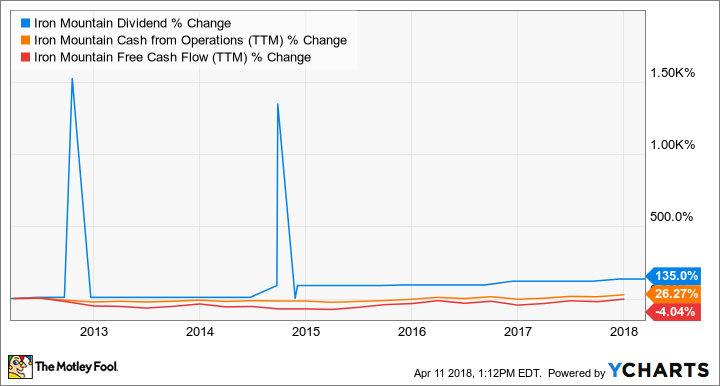 The lesson here? Future dividend growth -- and the sustainability of Iron Mountain's payout -- will be tied to its ability to continue growing cash flows. Recently its per-share returns have taken a hit due to its acquisition of the U.S. operations of IO Data Centers, but I think this is a smart long-term move. Today's Iron Mountain is heavily tied to storage of physical records, but over time a transition to paperless records will erode the value of its dominance in paper storage.

Its deep relationships with large companies -- over 90% of S&P 500 companies use Iron Mountain -- should help it transition to electronic records and data center operations, but there's plenty of competition with a head start in this arena. Iron Mountain's business -- and dividend -- should be stable for years, but its ability to grow the payout could be limited by the need to invest in the transition to virtual records.

A tale of two utilities

SCANA and PPL are the two lone utilities on this list. Generally, utilities are wonderful investments for dividend seekers who prioritize steady income in every economic environment, with some prospects for regular yearly increases, and -- maybe most importantly -- a relatively secure stock price. And while both SCANA and PPL have delivered modest dividend growth in recent years, the two companies have failed to preserve shareholder capital, with their stock prices down 49% and 30% from their 12-month peaks, respectively. 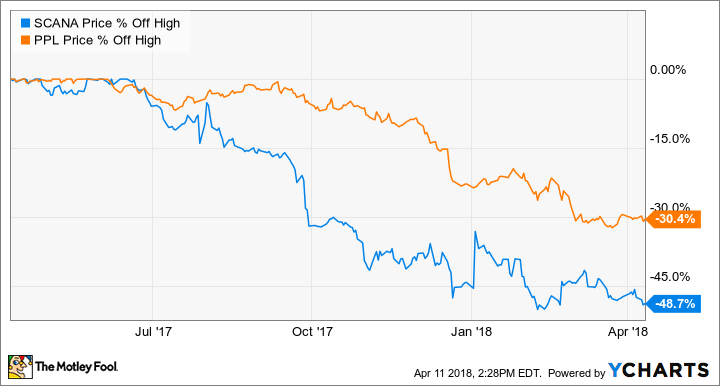 SCANA's troubles are a product of failed investments in developing two new nuclear reactors in South Carolina after years of cost overruns -- almost exclusively paid for by SCANA customers -- that have led to huge losses and the eventual scrapping of the nuclear project. Recently, SCANA announced that it has agreed to be acquired by Dominion Energy.

For PPL, the market's concerns are more in relation to its significant exposure to the U.K., and for two reasons. First, there is the impact of currency exchange, though PPL has done a solid job of hedging its downside risks, so these concerns may be overblown. Second, a combination of political and regulatory uncertainty in the U.K. -- there will almost certainly be increased regulation, and some high-ranking U.K. politicians have even mentioned nationalization of some utilities -- has played a significant role in driving many investors away from the company.

PPL also has a substantial amount of debt coming due within a few years, which it will have to either refinance or repay. Management says it will raise some capital with secondary stock offerings but will issue new debt as well. Between the dilution of new stock and almost certainly higher interest rates on future debt issued to pay down maturities, PPL could face some pressure on growing its dividend in the years to come.

Frankly, I think investors could do better than either of these two. SCANA's shares will be converted to Dominion (and its 4.8% yield) post-acquisition, while PPL's 5.7% yield comes with a number of question marks related to its U.K. business. AT&T would be a better choice if it's a dependable 5%-plus yield with minimal downside risk and steady -- if not very high -- dividend increases you're after.

3 Dividend Stocks You Can Safely Hold