As movie theater subscription service MoviePass burns through cash at an alarming rate, it is using baling wire and duct tape to cobble together a viable business model. The latest attempt at shoring up a failing strategy is parent Helios and Matheson (OTC:HMNY) acquiring movie database and ticketing site Moviefone.

Despite having acquired it from Verizon's (NYSE:VZ) Oath subsidiary for some $23 million, a fraction of the $388 million Moviefone was worth when AOL bought it back in 1999, it will do nothing to solve MoviePass's many problems. In fact, it may even exacerbate them. 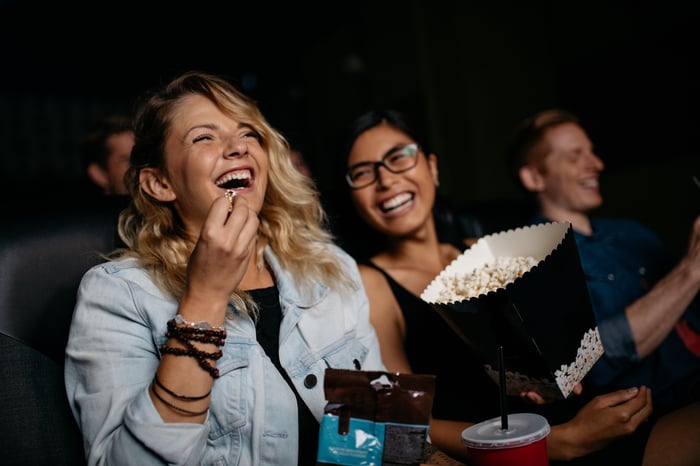 MoviePass is growing rapidly. At last count, it has over two million members who pay anywhere from $6.95 to $9.95 per month to get one ticket to see a movie at participating theaters. Helios and Matheson says MoviePass is accepted at more than 91% of theaters across the U.S., and that's the very heart of the problem. Every time MoviePass sells a ticket, it is losing money because MoviePass pays full price to the theater operator for each ticket. Its accountants have warned there is considerable doubt that it can continue as a going concern.

To make up for the losses, MoviePass negotiates to get a share of concession stand sales from the theaters. Because it says it is driving traffic to the theaters, it ought to get a cut of the sales the theaters make from it.

While smaller theaters likely enjoy the extra traffic MoviePass promotes, the larger chains aren't exactly enthusiastic about acquiescing. AMC Entertainment was one big chain that initially balked at giving MoviePass a slice of its lucrative concession sales, though it eventually relented and signed on. Cinemark Holdings has introduced its own subscription model to fend off MoviePass.

The subscription has also entered into the distribution business. It is acquiring movies in partnership with distributors so that when the films are released on DVD, streaming, or on-demand down the road, it will get a cut of the proceeds. It has already acquired its first film, a $3 million deal for the North American rights to a heist thriller called American Animals.

Now it's taking on Moviefone, which offers movie trailers, movie information, and ticketing through Fandango. Under the terms of the deal, Helios and Matheson is paying Oath $1 million in cash plus 2.55 million shares of common stock, worth about $8 million at current share prices, along with warrants to purchase an additional 2.55 million shares at a value of $5.50 each.

Helios and Matheson says the service has some 6 million unique monthly visitors, which, if everyone signed up for MoviePass (assuming there wasn't already some overlap), could more than double its membership rolls.

That would seemingly be a problem as it would only exacerbate its potential losses per member. The deeply discounted purchase price also suggests there's not much monetary value left in the business, which, coupled with its own need to discount its service further -- it cut it from $50 to $10, and then to $7 for new subscribers -- means MoviePass may no longer be growing at its previously torrid pace.

MoviePass may see this as an opportunity to leverage its services to encompass the entire movie theater industry, from distribution to exhibition and content, by aggregating data on moviegoers' habits, through advertising, and by selling merchandise through its platform. Yet there is little to show that it will accomplish any of this -- or that it will allow Moviefone to become "another valuable source of revenue for HMNY and MoviePass."

MoviePass has warned that more frequent viewing by subscribers will lead to increasing losses and the need for more financing. Bolting on yet another service that could increase such viewing habits while offering scant proof of generating a return on the investment means the likelihood of MoviePass collapsing under the weight before it's able to achieve profitability rise every day.