Facebook's issues may dominate headlines, but Twitter's issues strike at the heart of its value proposition.

Social media stocks have been hit hard, with shares of Facebook (META -1.69%) and Twitter (TWTR 0.43%) down 12% and 18%, respectively, over the prior month. Concerns about data privacy and the social media business model have reached a crescendo in light of revelations that Cambridge Analytica was able to obtain the personal data of up to 87 million users, many of whom did not authorize access for the company.

While Facebook's saga has captured more headlines, leading to a Capitol Hill appearance from CEO Mark Zuckerberg, a recent report from Pew Internet might ultimately be more damaging for Twitter, because it brings to light questions about the company's value proposition for its real customers: advertisers. 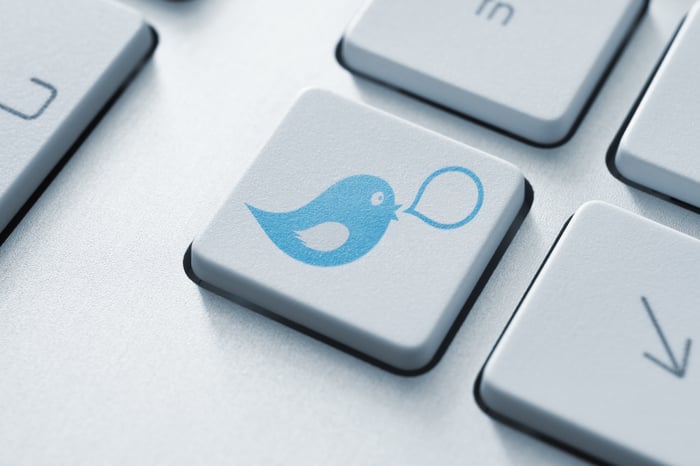 The Pew survey found Twitter is filled with automated accounts, or bots, and they're significantly more active than real users when measured by tweet links to popular websites. Overall, 66% of all links tweeted from the site are from automated accounts. Even worse, Pew identified 500 suspected bot accounts that are responsible for 22% of tweets from popular news and current events sites. For comparison, the top 500 most-active human accounts only tweeted 6% of the links to these sites.

It should be noted not all bots are malevolent or created with the intent to deceive -- some are clearly labeled as bots, and provide relevant information -- but the sheer volume of traffic provided by bots calls into question Twitter's monthly active user counts. For advertisers, however, this naturally leads to questions about the quality of each interaction, and whether the click is from an interested human being or from an automated account, which is essentially a wasted click.

This hasn't been the first time Twitter has been taken to task for its bot problem. In February, a bombshell report from The New York Times outlined how easy it was to create fake accounts, many of which used stolen identities. A single company, Devumi, had created 3.5 million accounts and sold them for a penny apiece to help influencers pad their follower counts.

Last year researchers estimated 48 million Twitter accounts, or 15% of its then-total user figure, were bots. Although Twitter disputed that number in the NYT piece, advertisers appear to agree with researchers, and are voting with their wallets by paying less for advertisement. Over the last two fiscal years, advertisers have been paying approximately 80% less per engagement.

Remember who the true customer is

Apple CEO Tim Cook once said, "when an online service is free, you're not the customer, you're the product." This is true. The true customers are the advertisers paying for access to a social-media network's user base and the data the network has captured about said user base. Facebook's admission it was careless with the information it provided third-parties isn't of significant concern to these advertisers, unless it results in an exodus of its user base. It's unlikely that will occur, as Facebook has become the de facto home page of the Internet.

On the other hand, Pew's report on Twitter is of direct concern to advertisers. Digital advertising is increasingly being questioned in terms of its efficacy and the quality of its user base. Facebook is considered one of the better outlets for advertisers, because its friends-based network is inherently harder for bots to infiltrate. Twitter's anonymous nature, on the other hand, makes it a haven for bots, and it appears advertisers were correct to worry about the composition of its user base. The news keeps piling up that Twitter appears unable or unwilling to address its bot problem.