The balance sheet of the premium beer, spirits, and wine purveyor reflects its recent outsized success.

During Constellation Brands' (STZ 2.02%) most recent earnings conference call, CEO Rob Sands noted that the company remained "the No. 1 high-end beer company and growth contributor to the U.S. beer category, outperforming the overall U.S. beer industry and all key competitors." When you achieve true scale in an industry and grow consistently at rates much higher than your peers, you start measuring yourself by how much of the industry's growth can be attributed to your products.

Indeed, Constellation's success shows up in several places, from its total return price over the last five years (375%) to its healthy profit margins and vigorous cash flow. Let's look at changes in the company's balance sheet during its 2018 fiscal year (year ended Feb. 28, 2018), and review how these numbers reflect Constellation's recent fortunes -- as well as its trials and its ambitions.

To begin, let's take a look at resources on hand. Long-term shareholders won't be surprised to learn that Constellation Brands is awash in liquidity. At the close of fiscal 2017, the organization held current assets of $3.2 billion against current liabilities of $2.7 billion, so its working capital at that time stood at $0.5 billion. At the end of fiscal 2018, working capital had increased to $1.5 billion.

The biggest driver in this difference is timing, as the company had roughly $889 million less in "current portion of long-term debt" obligations at 2018 year-end compared to the prior year. The phrase reflects debt obligations due within one year, which is why they're considered a current liability.

Dividing 2018 year-end current assets by current liabilities, we can see that Constellation's current ratio presently sits at an extremely healthy reading of 1.9. In other words, the company has almost twice as much in the way of cash, inventory, and investments as it does in accounts payable and other liabilities due within twelve months.

Both debt and physical assets expand

As in previous years, Constellation Brands upped its borrowings in 2018. Total long-term debt on the company's books has increased from $8.6 billion to $9.3 billion in the last fiscal year. During this period, Constellation incurred $1.0 billion in capital expenditure, with the bulk of these dollars flowing to increase beer production capacity.

Management is proud that the company reached a 2018 target of 31.5 million hectoliters in beer production capacity at its Obregon and Nava manufacturing plants in Mexico, while turning on a fourth glass-making furnace at the Nava facility. As a result, property, plant, and equipment on the balance sheet jumped from $3.9 billion to $4.8 billion year over year.

Now, given Constellation's ample cash flow, it wasn't necessary for the company to hike its borrowings last year. The organization produced $1.9 billion in operating cash during the last twelve months, so after subtracting the capital expenditure above, free cash flow reached nearly $900 million -- enough to fund its increase in physical assets.

But as I've explained before, as long as demand outstrips beer supply, Constellation Brands builds capacity in order to increase revenue. Thus, it's necessary to keep tapping debt each year for future expansion needs. The company is planning another ambitious round of capacity expansions through 2023, which includes widening Nava's current capacity to 30 million hectoliters; boosting Obregon's capacity by 5 million hectoliters; and continuing the buildout of its newest facility in Mexicali, Mexico, which will have an annual capacity of 5 million hectoliters.

Goodwill is under control

As a serial acquirer of promising premium craft beer, wine, and spirits companies, Constellation's goodwill and intangibles balances have increased enormously, nearly tripling over the last five years, to a combined total of $11.4 billion.

Constellation tends to acquire small brands which it can then scale through its own massive manufacturing and distribution system, thus supporting top-line growth. Purchases of wine labels like The Prisoner and Meiomi have borne out this strategy over the last few fiscal years. Constellation's management has tended to pay well in excess of the book value of the companies it acquires -- these differences get booked to the goodwill and intangibles line items on its balance sheet.

Management isn't afraid to pay handsomely for the rights to brands with explosive potential. Constellation's purchase of tiny Ballast Point Brewery for over $1 billion in late 2015 is the best example of this philosophy. Sometimes, the company recognizes that it's overreached and overpaid in an acquisition. For example, Constellation ended up taking an impairment charge on Ballast Point's trademarks, in the amount of $87 million, during the first quarter of fiscal 2018.

For shareholders worried that the same phenomenon might have played out on more recent acquisitions, fiscal 2018 provided a respite from burgeoning goodwill balances. Smaller acquisitions at reasonable multiples meant that the combined balance of goodwill and intangibles barely budged, increasing by just $100 million between the ends of fiscal years 2017 and 2018. 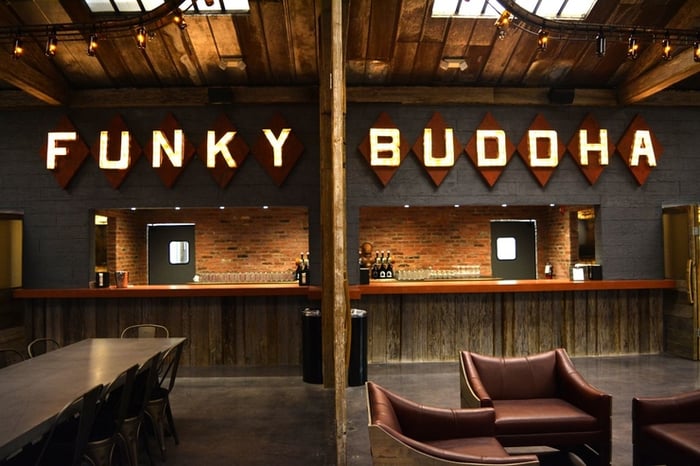 A timely investment leads to an explosion in "other assets"

Constellation Brands made headlines late last year when it announced that it had taken a minority position in Ontario, Canada-based Canopy Growth Corporation (WEED 5.34%). The transaction, valued at $245 million Canadian (approximately $191 million in U.S. dollars), gave Constellation a 9.9% stake in this provider of medicinal cannabis products, as well as warrants giving it the option to expand its stake in the future.

Management has said that it's not looking to offer cannabis-infused beverages any time soon, and that it "has no plans to sell any cannabis products in the U.S. or any other market unless or until it is legally permissible to do so at all government levels."

In the meantime (or at least initially), partial ownership of Canopy Growth has turned out to be a savvy investment. For fiscal year 2018, Constellation recorded an unrealized gain of $464.3 million on its investment of under $200 million. This is the primary reason that the "other assets" section of Constellation's balance sheet has ballooned, increasing more than fivefold since the end of 2017, from $141.4 million to $887.1 million.

Investors will want to note a final significant adjustment on Constellation's books: Deferred tax liabilities have taken a 36% haircut, from $1.1 billion in 2017 to $718.3 million at the end of 2018. This is due, of course, to recent tax legislation enacted in the U.S. As a result of the tax law changes, the organization recorded a one-time tax benefit at year-end in the amount of $363.0 million. This is a material gift from Uncle Sam -- but in truth, Constellation Brands, in charge of its own destiny, didn't really need the relief.