Please ensure Javascript is enabled for purposes of website accessibility
Log In Help Join The Motley Fool
Free Article Join Over 1 Million Premium Members And Get More In-Depth Stock Guidance and Research
By Travis Hoium – Updated Apr 13, 2018 at 11:50AM

The amount of new solar generating capacity added last year was sharply lower than in 2016, but the reasons for the plunge have nothing to do with its continued viability as a low-cost energy source.

Last year, for the first time this decade, the solar industry installed fewer megawatts than it did in the year before. According to GTM Research, 10,608 MW of solar power generation was installed in 2017 -- enough to power 1.74 million homes -- but down significantly from 15,128 MW in 2016.

The decline was driven by a number of factors from national policy to company-specific challenges, some of which may impact the industry for the next few years. But there are already some bright spots emerging that solar investors will want to keep an eye on. 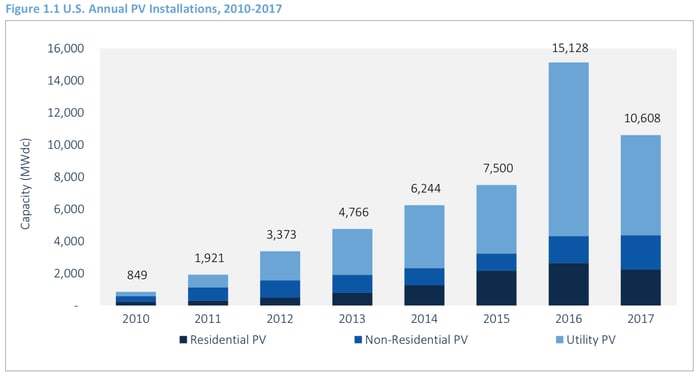 You can see in the chart above that the outlier in the long-term solar installation trendline is 2016, not 2017. That was in large part because 2016 was originally going to be the final year of the solar investment tax credit (ITC), a subsidy that allows project owners to get a 30% tax credit based on an installations' value. It's a subsidy the industry relies on to make solar projects economical, so when it was set to expire there was a rush to build solar projects.

The ITC subsidy was extended late in 2015, but that didn't stop installations from falling off a cliff in 2017. Large solar projects take years of planning, so the extension was too late to slow the rush of projects being built to hit the old 2016 deadline.

In short, there was a (well-planned) mad rush to build utility-scale solar projects in the U.S. in 2016, and 2017 was a natural retreat from that surge. That explains the utility-scale solar decline you see above, which accounts for most of the decline year over year. But residential and commercial solar could be bright spots, and as investors, that's where I think there are some interesting opportunities. Residential solar was down, but not everywhere

Residential solar installations took a step backward in 2017, declining by 16% to 2,227 MW. It was the first time this decade that residential solar installations had fallen, but digging into the numbers the decline isn't all that surprising. The biggest drop in installations came in California, which accounted for half of the decline. The state is ending traditional net metering for rooftop solar (where solar customers would only pay for the net energy they use) and moving to time-of-use (TOU) rates, which are less favorable to solar homeowners. For example, rates are generally lower mid-day when the sun is out and higher in the evening when the sun is going down. The effect is lower compensation for the electricity sent to the grid, making it harder to justify rooftop solar. But that's not the only reason residential solar declined.

In 2016, it became clear that the most interested customers had already bought in, so sales and marketing costs were starting to rise to unsustainable levels. The three biggest residential solar installers in the country -- Tesla (TSLA -5.66%), Sunrun (RUN -8.91%), and Vivint Solar (VSLR) -- all talked about focusing more on profitability and potentially foregoing growth for profits. That's exactly what we saw in 2017.

Tesla took the biggest step backward, installing just 87 MW of solar in the fourth quarter of 2017, down 57% from its peak in Q2 2016. Tesla is lowering sales costs by eliminating most of its traditional door-to-door sales teams, but it's also just shrinking its solar ambitions. You can't grow a solar company by shrinking staff, which is exactly what Tesla is doing.

Interestingly, Sunrun was the one growth story among installers, increasing deployments by 15% to 323.3 MW in 2017 and taking over the top market share position from Tesla. Sunrun benefited from Tesla and Vivint Solar shrinking, allowing it to leverage its network of third-party installers to grow. Sunrun builds some of the solar systems it counts as deployments but doesn't install all of them. Rather it offers financing and design tools to regional installers who were eager to grow their businesses in 2017. That's where the company's growth came from.

In residential solar, there are some bright spots despite the decline in installations in 2017. Vivint Solar is making more money than it did a year ago and Sunrun is growing on the back of regional installers it partners with. Amid the industry's decline, these two companies look like they're building winning strategies.

Utility and residential solar had a tough time in 2017, but one segment that had a great year is commercial solar. These are solar installations on rooftops of warehouses, big-box retailers, or even small community solar developments that may be near your neighborhood. According to GTM Research, commercial solar installations jumped 28% in 2017 to 2,147 MW and with corporate interest in renewable energy growing, I see no sign of the momentum slowing down.

The one company to watch in commercial solar is SunPower (SPWR -5.64%), who holds the #1 market share position and offers a flexible set of solutions for customers from rooftop solar to carports and ground mounted solutions. SunPower doesn't break out U.S.-only commercial sales, but globally it sold 426 MW of commercial solar products in 2017, bigger than both Sunrun and Vivint Solar's residential businesses. The challenge is that gross margin for the year was just 9.7% in the commercial segment, well below management's target of mid-teen margins. If SunPower can increase profitability on its #1 market share position in commercial solar this could be a great business long-term, but it has yet to live up to its financial promise.

While 2017 was a down year for solar, the pipeline is filling back up with big projects. GTM Research says the contracted pipeline of utility-scale solar projects is 16,883 MW with another 26,700 MW announced and pre-contract. Those won't all be built this year, but growth should return to the large-scale solar industry in time. On a company level we're seeing evidence that momentum is returning to the utility market. First Solar, which only serves the utility-scale market, shipped just 2.7 GW of solar panels in 2017, but it booked 7.7 GW of future sales, indicating that growth will return to utility-scale solar in coming years.

Where I think investors should expect the best company performance in 2018 is residential and commercial solar. Vivint Solar and Sunrun are increasing margins and taking market share in residential solar, which is a positive sign for their businesses long-term. Growth isn't the metric I would look for to define success this year, but I would look at gross margins and even net income improvement as signs these companies are on solid footing in residential solar.

SunPower is a complex company that produces utility-scale solutions and offers residential products, but where it has the most potential is providing solar to businesses and governments around the world. If it can expand commercial segment gross margins into the mid-teens and continue to ride the wave of growth in commercial solar installations it could allow the company to put massive losses the last two years behind it and return to profitability. If that happens, the company's stock could be a big winner for investors.