Please ensure Javascript is enabled for purposes of website accessibility
Log In Help Join The Motley Fool
Free Article Join Over 1 Million Premium Members And Get More In-Depth Stock Guidance and Research
By Daniel B. Kline – Updated Apr 13, 2018 at 3:28PM

A market exists, but the chain that is well positioned to step in may not take advantage of the opportunity.

The death of Toys R Us has left a void in the toy-selling business. Although Target (NYSE: TGT) and Walmart (NYSE: WMT) sell toys, they offer customers limited help and no subject matter expertise.

That leaves a hole in the market, one that will be filled partially by independent stores, but still leaves an opportunity for one struggling retailer. Unfortunately, the CEO of that retailer, Barnes & Noble (BKS), has recently commented that his chain plans to reduce its assortment of toys. 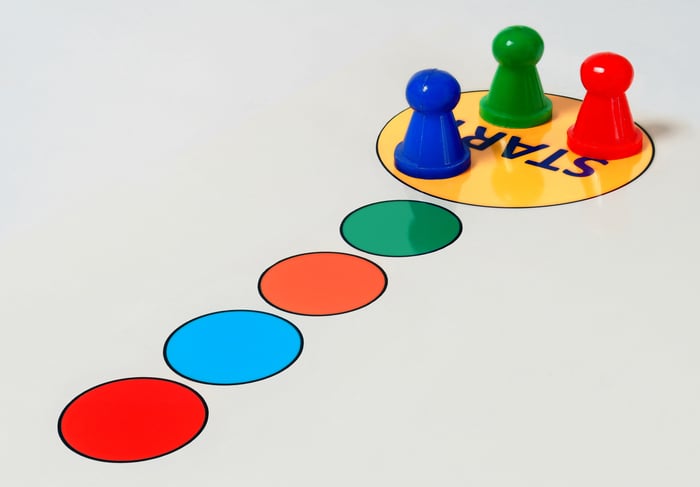 The book-selling chain has been in the specialty toy business for years. It mostly sells higher-end board games, educational and semi-educational toys like LEGO, and collectible games. Generally, Barnes & Noble has left mass market toys from companies such as Hasbro (NASDAQ: HAS) and Mattel (NASDAQ: MAT) to Target, Walmart, and, in the past, Toys R Us.

Many of the toys the bookstore sells require a level of customer service help. Games like Settlers of Catan and Ticket to Ride offer multiple expansion packs, cost upwards of $30, and may not be familiar to many customers. That's where an educated seller can make the difference between making a sale and having the customer leave to buy a better-known, less-involved game at Target or Walmart.

The end of Toys R Us opens the door for Barnes & Noble to expand its toy line into more mass-market products. The chain is uniquely positioned to fill the void by offering not only more toys than it currently does, but also knowledgeable employees who can help customers make the right choices.

That's a niche Toys R Us once occupied (though it at least partially let it go in recent years). Independent toy stores have the expertise, but many do not stock Hasbro and Mattel. That's partly to differentiate their offerings from those of the big boxes, partly due to space, and partly because ordering quantities make it impractical or unaffordable for smaller stores.

Why Barnes & Noble won't do this

CEO Demos Parneros seems to have given up on the idea of the chain being more than a bookseller. After a disappointing holiday season, he talked about cutting its offerings, not growing them, during the chain's Q2 earnings call:

To improve our performance in our gift and toys and games businesses, we began to reduce our over assortment of slower moving non-returnable merchandise. This decision is part of our broader strategy to grow sales and become more productive by featuring a narrower product assortment with higher turnover. Going forward, we will place a greater emphasis on books, while further narrowing our non-book assortment.

Those remarks were in November, before the death of Toys R Us. They also don't consider that Barnes & Noble has not succeeded in toys because it never approached them in the same way the chain has always approached books.

Independent toy stores almost always have staff that love the products being sold and act as advocates for them. They have played the games, collected the collectible, and are subject matter experts.

Barnes & Noble has always had staff that loved books, but it mostly just put toys on the shelf. Despite having large stores with lots of space, the chain does not hold regular game-play sessions, offer how-to-play classes, or host demos from toy companies.

Barnes & Noble has long hosted special events to bring people into its stores. It could easily use toys and games to drive traffic. Many collectible games -- like Pokemon, Magic: The Gathering, and Warhammer 40,000 -- have regular weekly play times and tournaments at smaller stores.

With its available space, Barnes & Noble could move into that market while also increasing its general interest, mass market toy lines. Doing that, however, would require hiring toy and game personnel with a high level of expertise. That costs money, which Parneros has been unwilling to invest.

Walmart and Target will take over whatever parts of the grab and go toy business they don't already have. Barnes & Noble could become the chain that offers in-depth toy knowledge and becomes a destination for consumers who want something more than the most-popular products.

That could be a growth market for Barnes & Noble, which books will never be. Parneros simply has to commit to hiring personnel, bringing in the right merchandise, and take advantage of this opportunity.