Berkshire Hathaway (NYSE:BRK.A)(NYSE:BRK.B) founder and CEO Warren Buffett, generally speaking, isn't a pushy investor. He and Berkshire tend to amass big stakes in noted companies, then leave them alone to make money for himself and his shareholders.

But in a brewing fight over the future of construction materials maker USG (NYSE:USG), shareholder Warren is taking a bigger role. He's a key figure in the tussle, and his moves are going to affect the outcome of the contest. Here's how and why he landed in the midst of this mix-up. 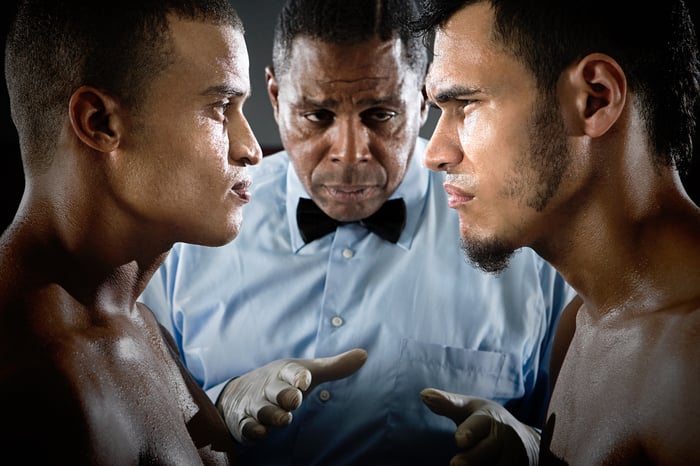 USG is a construction materials manufacturer best known for its gypsum wallboard; in fact, USG invented the inescapable Sheetrock version over a century ago. Berkshire bought the company in 2000 with a relatively small anchor stake. This grew when, shortly after USG went through bankruptcy, Berkshire bought into an issue of the company's convertible senior notes. After converting, Berkshire gained an additional 21 million shares.

These days, Buffett and Berkshire hold nearly 31% of USG. So, inevitably, they've become major figures in a buyout effort launched last year by Knauf. The German company, which is roughly the European equivalent of USG and controls almost 11% of USG stock, has made a pair of buyout offers; the latest is for $42 per share.

As is fairly routine in these situations, USG is playing hard to get, rejecting the latest bid with the rationale that it "is wholly inadequate as it does not reflect USG's intrinsic value."

What's not routine is Buffett's reaction; just after this proposal was formally made, the legendary investor offered to sell Berkshire's monster stake -- as long as Knauf pays $2 per share up front for it, and finalizes a deal for the entirety of USG within half a year or so.

This payment would effectively serve as a deposit, to be deducted from the ultimate sale price of the Berkshire stake. Knauf didn't accept (or hasn't yet accepted) Buffett's audacious deal, which amounts to around $87 million.

But it might not need to. Recently, Knauf called on USG stockholders not to support a slate of four candidates put forward by the company for its board of directors (all told, USG has 10 directors, but doesn't elect them all at once) in an election slated for next month. The idea, of course, is to put pressure on USG management to tilt "yes" to Knauf's buyout offer.

Perhaps accepting that he might not scoop up that quick $87 million, Buffett has thrown his considerable influence behind Knauf's "just say no" effort. According to Reuters, Buffett's assistant Debbie Bosanek stated in an email that "Berkshire's present intention is to vote against the four directors proposed by management."

"So just put [USG] down as not one of our brilliant ideas," he added. "Not a disaster."

A full buyout by a strategic investor clearly determined to win the company would put a neat, clean end to the not-brilliant idea. Buffett's nudging of Knauf with that put-your-money-where-your-mouth-is play, and his unambiguous support of the board vote protest, would be logical moves in such a push.

Although Berkshire and Buffett hold a big stake proportionally in USG, in terms of total value it's not one of their major equity holdings. Knauf's $42 per share offer would value that stake at just over $1.8 billion, a drop in the enormous bucket that is Berkshire's equity holdings.

The last thing Berkshire needs just now is more cash, but I think Buffett's motivation isn't necessarily based on money. Quite simply he's been an unenthusiastic investor in USG for years, and with the interest of a committed would-be buyer for the company, he's eagerly eyeing the exit door.