Please ensure Javascript is enabled for purposes of website accessibility
Log In Help Join The Motley Fool
Free Article Join Over 1 Million Premium Members And Get More In-Depth Stock Guidance and Research
By Keith Noonan – Apr 13, 2018 at 8:40AM 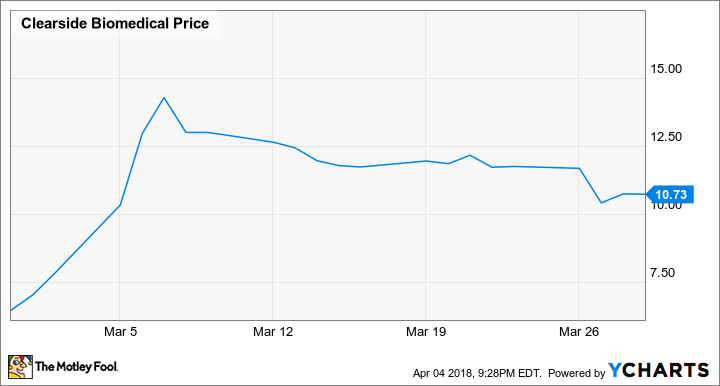 The company published an update on March 5 reporting promising phase 3 trial results for its drug CLS-TA as a uveitis-related macular edema treatment. Clearside Biomedical is a small-cap company with a valuation of roughly $300 million that had heavy short interest prior to the announcement, so the favorable news regarding the efficacy of CLS-TA sent shares soaring and prompted additional momentum as short-sellers moved to cover their positions.

In one trial, 46.9% of patients who received CLS-TA saw dramatic improvements on vision-test performance. These test subjects were able to identify at least 15 additional letters on the standardized vision exam, while only 15.6% of patients in the placebo group saw the same improvement. Testing also showed little in the way of negative side effects for the drug. Approximately 11.5% of study participants reported increased intraocular pressure, but this side effect was not considered to present significant risk. The encouraging trial data suggests that Clearside Biomedical's CLS-TA drug could be poised for approval as an uveitis-related macular edema treatment.

The company will release more in depth results from its recent CLS-TA trials at an upcoming medical conference. On the heels of the promising macular-edema treatment trial results, attention turns to whether the FDA will approve the marketing of CLS-TA and for what purposes. Clearside expects that it will submit a new drug application for CLS-TA to the regulatory agency in the fourth quarter of 2018, and it's also testing the drug as a treatment for macular edema associated with retinal occlusion and plans to report preliminary results from these trials in the same time window.

Clearside Biomedical Stock Down 26%: The "Positive" Data That Wasn't

Why Clearside Biomedical Is Up for a Third Straight Day