Please ensure Javascript is enabled for purposes of website accessibility
Log In Help Join The Motley Fool
Free Article Join Over 1 Million Premium Members And Get More In-Depth Stock Guidance and Research
By Scott Levine – Updated Apr 13, 2018 at 8:51AM

Shares of Stratasys (SSYS 1.30%), a leader in 3D printing, jumped 11% in March, according to data from S&P Global Market Intelligence. Besides the company's reporting of strong fourth-quarter and full-year earnings, investors responded favorably to management's outlook for 2018.

Reporting revenue of $668 million for 2017, Stratasys extended its streak of consecutive years of declining sales to four. Investors, however, found some solace in the fact that management expects this trend to reverse course in the coming year, forecasting revenue between $670 million and $700 million for 2018. 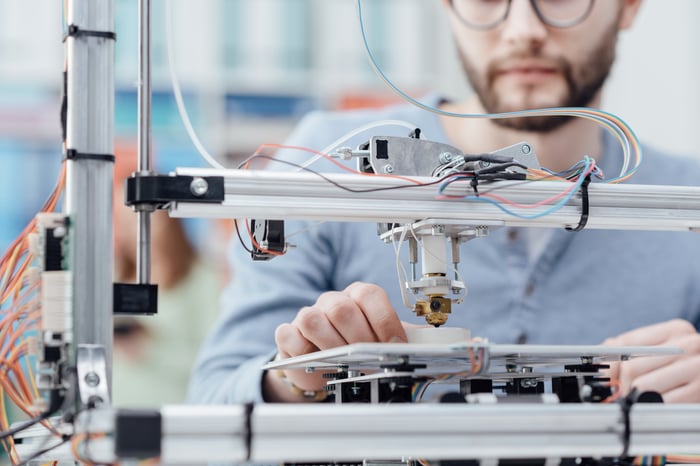 Besides the expectation of future top-line growth, investors celebrated the company's success in expanding margins. Stratasys, for example, reported a gross margin of 48.3% for 2017, representing steady improvement over the 47.2% and 14.7% that it reported in 2016 and 2015, respectively. Furthermore, while the company reported operating margins of negative 12.9% and negative 197.3% in 2016 and 2015, respectively, in 2017 it reported a negative operating margin of 4.4%. According to management, the decrease in operating expenses was largely "driven by certain cost-reduction efforts which reduced our facilities and information systems related expenses."

Although Stratasys pleased investors by reporting strong free cash flow growth in 2017, it was largely attributable to a year-over-year reduction in capex since operational cash flow remained flat. Moving forward, investors shouldn't be surprised if the company fails to generate a comparable amount of cash. During its earnings presentation, management forecast capex in 2018 between $40 million and $50 million as the company pursues long-term growth in the form of developing a "highly differentiated metal additive manufacturing solution."