Please ensure Javascript is enabled for purposes of website accessibility
Log In Help Join The Motley Fool
Free Article Join Over 1 Million Premium Members And Get More In-Depth Stock Guidance and Research
By Danny Vena – Apr 14, 2018 at 11:46AM

This is all part of a billion-dollar opportunity that Netflix is just starting to cash in on.

As a writer, I sometimes get to wonder "what if?" In a previous comparison between streaming pioneer Netflix (NFLX 2.28%) and The Walt Disney Company (DIS 0.26%) in 1957, I wrote, "[Netflix] hasn't yet announced a theme park, but can you imagine an attraction based on Stranger Things? I can -- and it would be awesome."

Seems like I wasn't the only one that felt that way. Comcast's (CMCSA -1.63%) Universal Studios revealed that the Netflix megahit Stranger Things will be brought to life at its theme parks just in time for Halloween.

Stranger Things, Netflix's pop culture phenomenon will be part of Universal's Halloween Horror Nights event at locations in Hollywood, Orlando, and Singapore. The company partnered with Netflix and the show's creators Matt and Ross Duffer, and executive producer Shawn Levy, to create mazes that are "authentic representations" of the hit show.

The team is recreating locations that will be familiar to fans of the popular sci-fi horror series.

From the menacing Hawkins National Laboratory, under the U.S. Department of Energy, to the Byers home adorned with an erratic display of flashing Christmas lights and the eerie Upside Down woods oozing a shower of floating orb-like spores, the chilling new mazes will offer surprising twists and unexpected turns around every corner.

Guests will be also be stalked by the Demogorgon, the monster that lives in the alternate reality portrayed in the show.

Show me the merchandise

This announcement is just the latest in a recent string of moves to position the company to reap the benefits of its growing cache of intellectual property.

Early last year, Netflix revealed its licensing aspirations with a job posting seeking to hire a merchandising and promotion manager. The responsibilities of the position would involve the oversight of content distribution and the licensing of toys, comics, books and apparel for its popular programs. At the time, the company said it wanted to use merchandise to "help amplify fervor around key titles." Netflix even tested a limited assortment of products at cult-retailer Hot Topic before taking the plunge.

The massive popularity of Stranger Things, the nostalgic 80s thriller, persuaded Netflix to delve further into licensing content. Late last year, Netflix executives wore Stranger Things-themed light-up Christmas sweaters during the third-quarter 2017 conference call to discuss the company's financial results. The purposefully ugly sweaters featured strings of holiday lights over letters of the alphabet, a theme that would be instantly recognizable to fans of the show. The company said this and other products would be available at Target, as it was "learning to do merchandise." 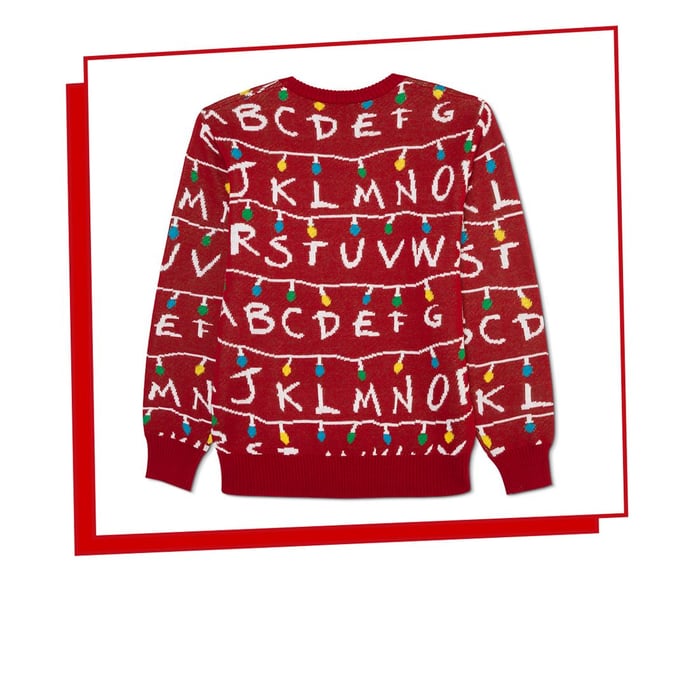 Netflix executives wore this sweater to promote the show and signal the company's entry into merchandising. Image source: Target.

Not just fun and games

Sales of licensed merchandise totaled $263 billion in 2016 according to the International Licensing Industry Merchandisers' Association. Those numbers likely crept higher last year, though figures for 2017 are not yet available. It should be no surprise that Disney was the top licensor in 2016, generating $56.6 billion in retail sales. Netflix is following the template laid out by the House of Mouse in many ways, including creating its own content, generating buzz with merchandise, and even acquiring other content creators.

Last year, RBC Analyst Mark Mahaney calculated that Netflix could generate more than $1 billion in revenue by selling merchandise from its hit shows.

This deal with Universal could be the catalyst that drives Netflix even further into merchandising success. Stranger Things is just one of a number of hit shows for the streaming service, though it is surely the most visible. Future programs could capture lightning in a bottle again, and before long, the company could be sitting on a significant additional revenue stream.

Take it from Reed

Earlier this year, Netflix CEO Reed Hastings was asked about the potential for merchandising. He replied, "That's a big one for us. We'll be doing more of that over time."