That's one way to return cash to stockholders.

On April 12, chip giant Broadcom (AVGO -0.43%) announced that its board of directors authorized a $12 billion stock buyback program. The authorization, Broadcom says, is "effectively immediately" and extends through November 3, 2019 -- the end of the company's fiscal year 2019.

In the press release announcing this share repurchase authorization, Broadcom Chief Financial Officer Tom Krause explained that the company is holding fast to its "policy of delivering 50% of trailing-12-month free cash flow to shareholders in the form of dividends while adding the ability to use the balance of our free cash flow not only for acquisitions but also for opportunistic buybacks." 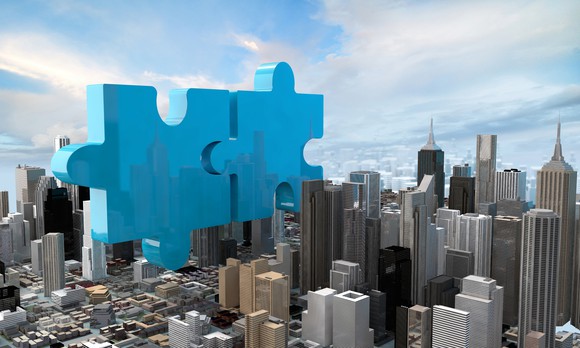 Let's go over what this means for Broadcom's business.

A key reason companies like to do stock buybacks is that it's an easy way to boost their reported earnings per share figures. Remember that earnings per share is calculated by dividing the amount of net income that a company generates in a given period of time (e.g. a quarter, or a year) by the number of shares outstanding.

Share buyback programs don't affect the total amount of net income a company generates (net income is a measure of business performance rather than a product of financial engineering), but they do affect the total number of shares outstanding. At worst, buyback programs serve to offset the natural increase in a company's share count thanks to things like stock-based compensation (tech companies often make liberal use of such compensation strategies), and at best, they can actually reduce the total number of shares outstanding, which boosts earnings per share.

Broadcom's market capitalization is $99.73 billion as of writing, so a $12 billion share repurchase program implemented fully could substantially reduce the company's share count and meaningfully boost earnings per share. This is music to investors' ears.

It's worth noting though that Broadcom isn't saying that it'll definitely use up the entirety of the share repurchase authorization. That, in my view, isn't because Broadcom wants to announce a splashy, large buyback program to boost the stock with no intention of following through.

Instead, what Broadcom is doing is saying that as long as it doesn't have a better use for that cash (e.g., a juicy acquisition opportunity), it'll deploy it to repurchase stock and try to create shareholder value that way.

Broadcom has generally been a good steward of its shareholders' money -- it pays a respectable dividend and carefully manages its business portfolio by buying great assets and divesting itself of ones that don't perform well.

Broadcom is also showing that it's seriously committed to acting in the best interests of its shareholders -- if it can't find anything better to do with the excess cash it generates (and, remember, Broadcom already allocates around half of its free cash flow to the dividend), it'll simply give it back to stockholders in the form of a share repurchase.

As usual, another good move from Broadcom.