Please ensure Javascript is enabled for purposes of website accessibility
Log In Help Join The Motley Fool
Free Article Join Over 1 Million Premium Members And Get More In-Depth Stock Guidance and Research
By Steve Symington – Updated Apr 17, 2018 at 9:04AM

Buy shares of these three companies now. Your children will thank you later.

As we work to instill good values in our children, we generally try to discourage boasting. But as long-term investors with the world's most powerful tool for wealth creation -- the stock market -- at our fingertips, we'll readily admit we want to buy and hold stocks that our kids will at least be tempted to brag about someday. 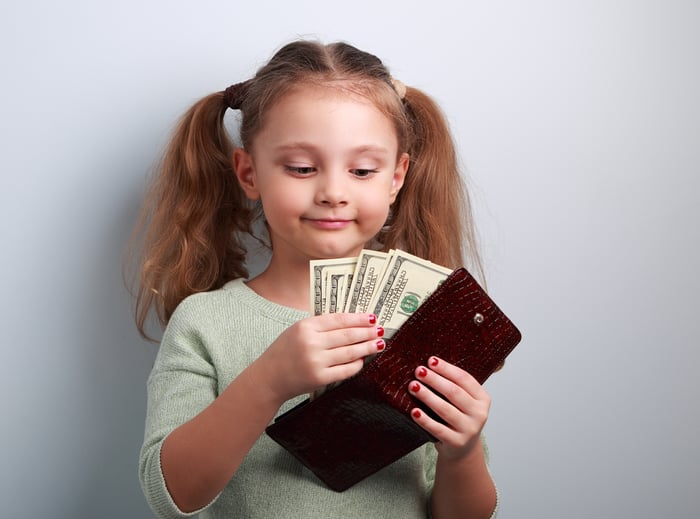 Buy before the robots take over

Steve Symington (iRobot): Shares of iRobot are still reeling from a more than 34% single-day drop in early February, as the market reacted to seemingly disappointing forward earnings guidance from the Roomba maker.

During the subsequent conference call, however, CEO Colin Angle elaborated that the company is purposefully opting to foresake some near-term profits in order to invest in driving top-line growth and maintaining market share in these crucial early stages of its long-term story.

"This is a movement in time where over the next three years the true winners in the consumer robot industry are going to be determined for the next decade," Angle added. He also noted that household penetration in the robotic vacuum market -- which comprises the vast majority of iRobot's current sales -- is still "extremely low," in the single-digit percent range, while strong economic conditions are driving healthy global growth for the category.

Even more important, iRobot knows that the consumer robotics industry will grow to represent much more than "just" robotic vacuums. In floorcare, the company is enjoying steady growth for its supplementary Braava jet floor mopping robots. With the help of their fortress-like patent portfolio and sophisticated mapping and navigation technology, management has also spoken at length of their plans to make iRobot's products the central hubs for enabling smart homes to behave more intelligently in the future.

It's also developing a robotic lawnmower, which would propel it into a new multibillion-dollar market in the coming years. And Angle has previously revealed that iRobot is further exploring consumer robotic solutions for laundry folding, bathroom cleaning, and loading and emptying dishwashers.

As it stands, iRobot is still a relatively small company with a market capitalization of under $2 billion. But if even a fraction of its ambitious plans come to fruition when our kids are grown, I think it will prove to be a stock that early investors will be more than happy to brag about.

Anders Bylund (Tesla): So when my kids sit down to talk about our Tesla investment with their own young ones, a couple of decades from now, I'd imagine something like this:

When daddy first invested in Tesla, people thought it was a car company. You know, the first lineup of totally electric cars, kicking those antiquated petroleum monsters to the curb. That took a while but nobody buys gas cars anymore. Unless you're running a car museum, I guess. Tesla really started that changeover, and for a while it really was all about the cars.

But you know, Elon Musk was pretty clear about his long-term goals from the start. The original master plan of 2006 was to keep building more and more affordable electric cars, pushing the entire industry in that direction and setting the stage for a gas-free future.

Musk doubled down on the same basic goals 10 years later and expanded them a bit. At that point, Tesla was working on solar panels and large batteries, moving beyond the car business. Sure, it also worked on self-driving vehicles and a more complete lineup of vehicles back then, forming the financial bedrock under the cross-industry behemoth Tesla would become later.

Here in the 2040s, there's no real reason to buy cars for your own use and nobody really cares which nameplate is on the self-driving car you hailed today. So Tesla moved on, and now it's a next-generation energy giant with a finger in every pie from infrastructure and entertainment to sustainable farming and space exploration. As you know, early investors have seen fantastic returns over the decades. I just don't know how Daddy Moose saw this coming all the way back in the 2010s, but we can thank that long-term vision for half of the wealth he's passing on to us now.

The details may be wrong, but the overall gist of that story should be on target.

Keith Speights (NVIDIA): Imagine your daughter or son 20 years from now, chatting with you in a beach house overlooking a gorgeous white sand beach with their kids -- your grandchildren -- splashing in the crystal-clear water. Your adult child is telling you about how much the kids love their new pediatrician. Here's the kicker: You're not in a beach house and are instead in a virtual reality world while your fully autonomous car is driving you to visit your child. And that pediatrician is a robot.

Too far-fetched? Maybe, but maybe not. And if it does come about, your grown-up offspring would likely be bragging to you if you had bought them shares of NVIDIA. The company is at the center of the technologies that could make that future possible.

Being at the forefront of several enormously important tech trends caused NVIDIA stock to soar close to 900% over the last three years. I expect NVIDIA to remain an important player in these areas for a long time to come. There should be plenty of room for the stock to go much higher over the long run -- even if the future doesn't turn out exactly like I think it will.