Believe it or not, one of the notable market laggards of the past few years has been Starbucks (NASDAQ:SBUX). The shift away from brick-and-mortar shopping toward e-commerce has affected all U.S. retailers, even the best of the best (Starbucks being one of those).

However, hope is not lost. While Starbucks' U.S. region may have its challenges -- Americas same-store sales came in at an underwhelming 2% last quarter -- there is tremendous growth potential for Starbucks in China.

Starbucks has actually been in that region for the past 19 years, but it operated the East China region -- which contains Shanghai, the country's biggest city -- as a 50-50 joint venture with local franchiser Uni-President Group. Just recently, however, Starbucks seized the opportunity to take full ownership of these valuable stores, acquiring the remaining 50% stake in East China from UPC for roughly $1.4 billion.

Essentially, Starbucks is going all-in on China and for good reason: One day, China will likely be the company's largest, most important market. But how big is the opportunity, really? 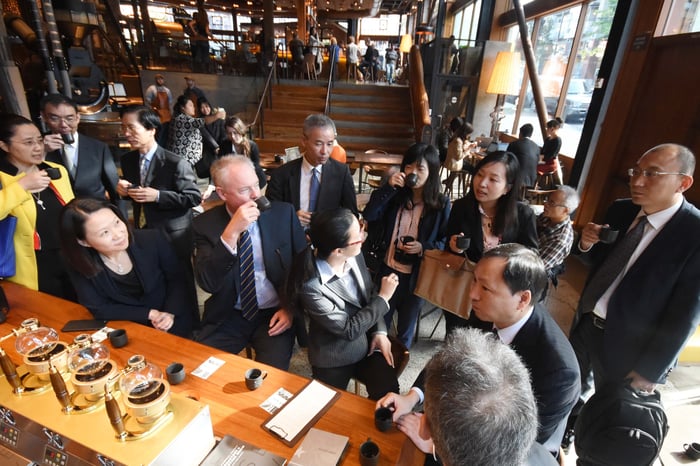 The potential of China is absolutely massive. Over the next five years, China's middle class should double from 300 million to 600 million (twice the size of the entire U.S. population). By 2030, it will surpass the U.S. as the largest economy in the world.

Starbucks has already grown its Chinese store count from 700 to 3,100 in the past five years, with plans to open 500 locations per year going forward. That compares with 13,930 stores in the U.S. (and that number itself is still growing) -- the company can enjoy years and years of growth before narrowing that gap.

But while the opportunity is large, Starbucks is already building off of a strong base. Shanghai has 600 Starbucks stores, the highest number of Starbucks in any city. That's right: any city, including New York, London, Paris, or anywhere else.

In fact, the Shanghai Roastery -- which serves deluxe coffee and food offerings at premium prices -- opened in Dec. 2017 and instantly became the highest-grossing Starbucks location in the world.

Starbucks' rapid expansion of the East China business has resulted in a four-to-one store advantage over its nearest competitor, and the company has locked up prime real estate in Shanghai and the surrounding region.

In spite of the rapid store expansion (a 40% expansion in East China in just three years), the company has also achieved positive same-store sales while doing so. That's an impressive feat when new stores are popping up all over the place. In fact, Starbucks has achieved 33 straight quarters of positive same-store sales in China, with all but one quarter being above 5%.

Moreover, China's MSR program is different from the U.S. version, as the Chinese have to pay in order to join, like a subscription. This is a testament to how much Chinese consumers love Starbucks, and the rewards program will allow the company to establish even deeper relationships through customized offers and benefits going forward.

By fully consolidating East China, Starbucks will also be able to better coordinate its digital experiences throughout the entire country. Management also pointed to synergies in the areas of IT, supply chain, and putting talent where it's most needed.

So while the performance of U.S. stores has usually been the focus of Starbucks' earnings calls, as an investor, I'd begin to focus more on the Chinese market. That region will, according to management, "undoubtedly" be bigger than the U.S. one day, so it's imperative that the company executes on its leadership position there.

And if Starbucks can execute there as well as it has in the U.S., the future should remain very bright for the company and the stock.