The Chromebook x2 targets both Windows convertibles and Apple's (NASDAQ:AAPL) iPad Pro. The device has a 12.3" screen, compared to the iPad Pro's 12.9" display, and is only slightly thicker and heavier than the iPad Pro. 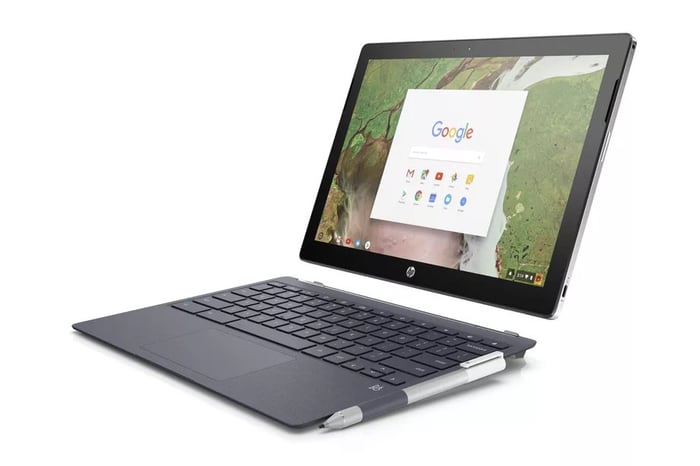 The Chromebook x2 also has much beefier specs than an average tablet. The base model is equipped with Intel's Core m3 CPU, 4GB of RAM, 32GB of storage, and a 2,400 x 1,600 display. It has two USB-C ports, a microSD slot, and lasts 10.5 hours on a single charge.

Why HP made the right move

HP is the largest PC maker in the world, and is one of three OEMs -- the other two being Apple and Dell -- that posted positive shipments growth in 2017, according to IDC. HP's shipments jumped 8.2% during the year, Apple's shipments rose 5.9%, and Dell's shipments grew 2.7%.

HP attributed that growth to robust demand for its high-end laptops and 2-in-1 devices, particularly in the US market. Fresh designs, as seen in flagship devices like the Spectre, also helped its brand stand out in a highly saturated market. That's why HP's Personal Systems (PC) revenues rose a whopping 13% annually on a constant currency basis last quarter.

Meanwhile, Chromebooks remain a pocket of growth in the sluggish PC market, especially in schools. Between 2012 and 2017, Chromebooks' share of the US K-12 education market surged from 5% to 59% according to Futuresource Consulting. Over the same period, Apple's share plunged from 52% to 19%, and Microsoft's share tumbled from 43% to 22%.

Global Market Insights expects global Chromebook shipments to surge from just under eight million units last year to 17 million units by 2023. Those are tiny figures compared to the 260 million PCs shipped worldwide last year (IDC), but they indicate that any PC maker that is hungry for growth should consider selling Chromebooks.

A popular and evolving OS

Chromebooks are popular because they're cheap, seamlessly connected to Google's cloud services, and constantly supported by Google's over-the-air software updates. Android apps can also be installed via the Google Play Store on newer Chromebooks, enabling users to easily shift between tablet and laptop modes.

The convergence of Chrome OS and Android resembles Microsoft's "jack of all trades" approach with Windows 10, and is different from Apple's strategy of keeping iOS and OS X separate. That's why it makes strategic sense for HP to launch a detachable 2-in-1 Chromebook.

Several companies, including Acer, previously launched 2-in-1 Chromebooks with 360-degree hinges. Those devices are cheaper than the Chromebook x2, but the Chromebook x2's detachable tablet could make it more attractive to customers who want to simultaneously replace their stand-alone tablets and laptops.

But will the Chromebook x2 be a game changer?

It's easy to understand why HP launched the Chromebook x2, but it's unclear if customers will buy the $600 device when most Chromebooks cost less than $400. Google previously launched the Pixelbook, a high-end Chromebook that started at $999, but its recent price cuts indicate that demand remains tepid.

Customers who are looking for a 2-in-1 device also have plenty of products to choose from, including cheaper Windows 2-in-1 devices and the pricier iPad Pro. Chrome OS' reputation as a laptop OS could also confuse customers who don't realize that they can install Android apps on Chromebooks.

Therefore, I expect the Chromebook x2 to attract some interest from students and mainstream consumers, but it probably won't inspire its rivals to launch a wave of new detachable Chrome OS devices just yet.