Stocks gained broadly on Monday in advance of earnings reports. The Dow Jones Industrial Average (DJINDICES:^DJI) and the S&P 500 (SNPINDEX:^SPX) both added almost a percentage point.

As for individual stocks, two companies that released cancer drug trial results at the American Association for Cancer Research annual meeting could claim success, but the market sent their shares in opposite directions. While Merck (NYSE:MRK) made gains, Bristol-Myers Squibb (NYSE:BMY) tumbled. 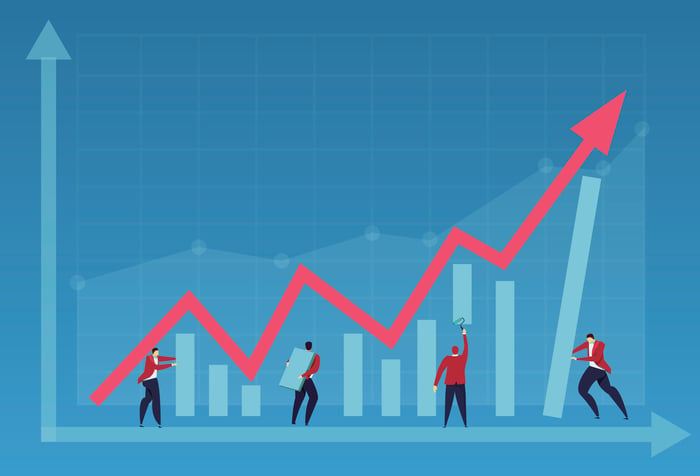 Merck scored a big win for its blockbuster anti-PD-1 cancer drug Keytruda when it announced stellar results in a trial in first-line lung cancer treatment, sending the stock up 2.6%. The company reported that its phase 3 Keynote-189 study showed that Keytruda combined with chemotherapy reduced the risk of death by half in patients with advanced nonsquamous non-small cell lung cancer (NSCLC) compared with chemotherapy alone.

The study of 616 untreated patients showed a 51% reduction in the risk of death at 10.5 months, with 69.2% of patients alive after 12 months, compared with 49.4% in the group with chemotherapy alone. The median for progression-free survival, a measure of tumor growth inhibition, was 8.8 months for the Keytruda combination, compared with 4.9 months for chemotherapy alone.

Possibly the most meaningful result of the study was that benefits were observed regardless of the level of expression of the PD-L1 protein. Keytruda has been approved as a single agent for first-line NSCLC treatment in patients with high PD-L1, and was given fast track approval for the drug in combination with chemotherapy for all patients based on results from a smaller, phase 2 study, contingent on further confirmation, which the latest study appears to provide.

Merck is battling for the top share position in the lucrative market for first-line treatment of lung cancer, and today's results should help win over doctors who may have hesitated to prescribe Keytruda based on results from the smaller study.

Investors not so impressed with Bristol-Myers Squibb's drug trial success

Bristol-Myers Squibb released initial results of a successful trial of a combination of its cancer drugs Opdivo and Yervoy in first-line treatment of NSCLC, but investors inevitably compared the trial with Merck's and concluded that Bristol-Myers' trial wasn't as compelling, and the stock tumbled 7.8%.

The study was clearly a success, but coming the same day as Merck's presentation on a treatment for the same disease, the market was looking for the winner and clearly Bristol was not it. The Opdivo/Yervoy study was more narrow, looking at patients who tested high for TMB, and the mortality results lacked the impact of the Keytruda study. But with the studies designed for different purposes, the comparison wasn't really fair, and it would be impossible to conclude which drugs are superior from these two studies.

That didn't stop the market from weighing in, though. Investors clearly took today's news as evidence that Merck's Keytruda could continue to gain market share at Bristol-Myers's expense.