Dropbox boomed in its March 23 IPO. What comes next?

Dropbox (DBX -0.60%) stock debuted on the Nasdaq with a bang. Pricing at $21 a share (up from an expected pricing range of $16 to $18), Dropbox surged more than 40% on IPO day, and was recently selling for as much as $33 a share on April 12 -- more than twice its estimated price just one month ago. All of this naturally raises the question: Is there any more room to run, or does Dropbox already cost too much?

Today, Wall Street's quiet period surrounding the IPO lifted, and the analysts who underwrote its IPO were finally permitted to begin answering that question publicly. (Other analysts, uninvolved in the Dropbox IPO, have already begun speaking up.) Here's what the underwriters said today. 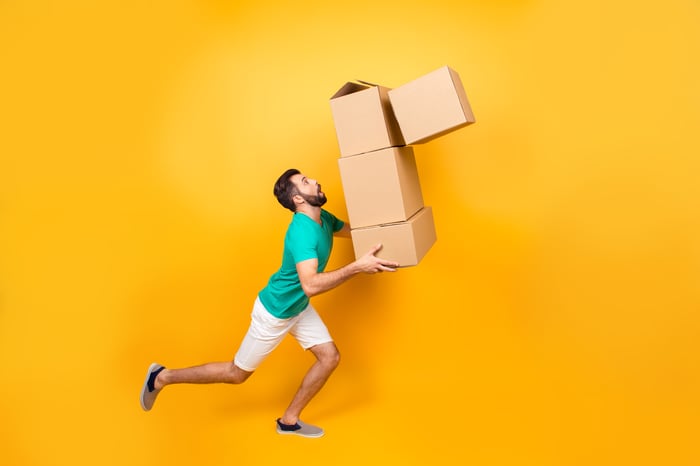 I'd think twice before loading up on Dropbox, if I were you. Image source: Getty Images.

Dropbox's S-1 filing with the SEC described the company's IPO as being underwritten by 12 of Wall Street's biggest investment banks. At last report, StreetInsider.com (subscription required) and TheFly.com have collectively confirmed that 11 of these analysts have published new stock ratings for Dropbox today. (So far, Allen & Co. has failed to chime in.)

The verdict: Seven buy ratings, four holds -- and not a single sell.

What are the Dropbox's fans saying? At a recent share price of $29 and change, they're by and large bullish, predicting 12-month price targets ranging from $32 to $40 a share. Here's a representative sample of the more bullish sentiments expressed today:

And yet, even Deutsche admits that Dropbox stock is "hardly cheap." So far, we haven't heard any out-and-out bears growling among these underwriters -- but there are a few who seem to be hibernating after the stock's rapid run-up.

Merrill Lynch, for one, says that "the strong cloud collaboration growth story is fairly represented in the current valuation." Jefferies also thinks the stock is "valued appropriately," although it might inch up a bit higher to $31 a share.

Of the four hold raters, RBC gives the most detail on its reservations, in a report covered on TheFly.com today -- and Goldman the most pessimistic assessment. While insisting that Dropbox boasts a "very impressive" business model and a "very large market opportunity," RBC worries that "9-times" sales may be too much to pay for the stock -- a valuation very close to what JMP Securities also named.

As for Goldman Sachs, they say the "current valuation" already prices in Dropbox's growth outlook. In fact, at a price target of $27 a share ($2 less than Dropbox costs today), Goldman Sachs' price target is the most conservative of all.

When you get down to it, that's really the signature concern about Dropbox today: That after running up 40% in price, the stock simply has no room left to run. And the more I look at Dropbox and the estimates for it, the more I begin to agree with that concern.

Currently unprofitable, Dropbox does boast impressive free cash flow from its business -- $305 million in positive cash profits generated over the last 12 months, according to data from S&P Global Market Intelligence. And yet, according to analysts who follow the stock -- and again, these are primarily analysts who underwrote Dropbox's IPO -- the most investors can expect Dropbox to grow profits over the next five years is about 12.5% a year.

What does that work out to, valuation-wise? With $11.6 billion in market capitalization, and about $220 million in net cash on its balance sheet, Dropbox stock sports an enterprise value of $11.4 billion. Divide $305 million in trailing free cash flow into that, and you end up with an EV/FCF ratio of about 37 on the stock. To my mind, that's simply too much to pay for a 12.5% growth rate.

Long story short, unless Dropbox can grow a whole lot faster than most analysts believe possible -- or unless its stock price comes down a whole lot more than its investors would probably like to see -- its shares simply cost too much.

And all these analysts who are telling you to buy it are wrong. That's why I'm putting my own reputation on the line and rating Dropbox stock a sell on Motley Fool CAPS today. Follow along, and feel free to laugh if it turns out I'm wrong.