Oil and gas investors have been through the wringer over the past few years. Even the most stable investments in this industry -- pipelines, processing, and logistics -- haven't been spared. Case in point: Shares of Magellan Midstream Partners (NYSE:MMP) have declined 18% over the past three years despite the company posting consistent revenue and cash flow growth. To top it off, there has been a slew of regulatory and tax changes in recent months that will have a significant impact on this particular industry.

So as part of Magellan's analyst day presentation, management tackled some of the questions these issues raise, and laid out its plans on how to grow the business. Here are the four key takeaways that Magellan investors should know. 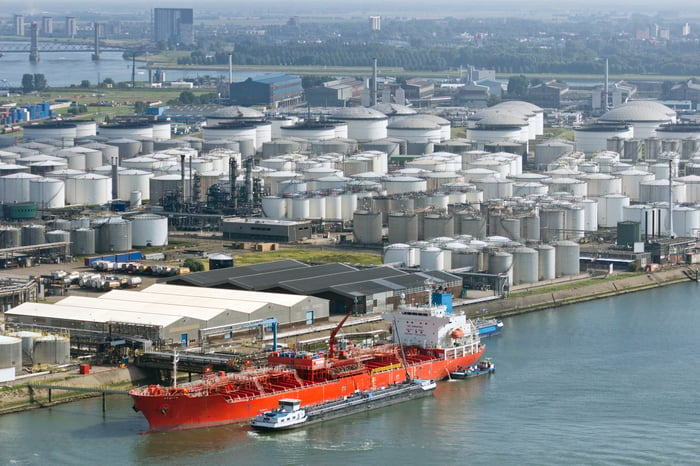 No issue with FERC rule changes

On March 15, the Federal Energy Regulatory Commission (FERC) issued a change to a policy related to master limited partnerships and the tax treatment for certain contract structures. The commission determined that any interstate oil or gas pipeline company couldn't charge an income tax recovery allowance when calculating what are known as cost-of-service contracts. A cost-of-service contract is a pricing model that calculates the cost to operate a pipeline and then attaches a fixed rate of return. Basically, the ruling says that master limited partnerships (MLPs) can't include income taxes as an operating cost because MLPs don't pay income taxes but instead pass the tax obligation onto their unitholders.

Of course, the moment that policy change was issued, MLP investors lost their minds and indiscriminately sold off pipeline companies, even though Magellan and others went out of their way to explain that this wouldn't have a material impact on the business the day of the announcement.

During its analyst day presentation, this was the first thing that management addressed. Management stated specifically that only 1% of the company's tariffs in 2017 came from these cost-of-service type contracts. A vast majority of the company's contracts are structured as indexed rate contracts. These are contracts that can increase what it charges customers based on what is known as the FERC index.

FERC has not issued any policy changes to the indexing method contracts that Magellan uses for a majority of its assets, and Magellan's management team doesn't expect it to, so it won't likely affect the outlook for the company.

Sticking with the MLP model for now

The reason a company structures itself as a master limited partnership is because of the tax benefits. MLPs are allowed to pass the obligation for taxes to their unitholders because they pass all of their earnings to individual unitholders. The owners of those units then pay taxes at their individual rates (39.5% for the top rate), and the MLP compensates owners by paying large distributions.

This was a very appealing option for companies in the energy business because it lowered the tax burden on the company and its stakeholders. Under the former tax laws, a C corporation would have to pay its corporate tax rate (35%), and investors would have to pay capital gains taxes on dividends (15%-20%). With the most recent changes to the tax code and the much lower corporate tax rate, that tax advantage is much lower than it used to be. So much so, in fact, that management went out of its way to explain why the MLP structure is still the best fit for Magellan.

From an investor standpoint, the thing that is encouraging is that management is open to changing its corporate structure if it best suits its investors. Management acknowledged that the benefits of being an MLP are diminished based on the changes to the tax code and this recent FERC ruling. The team said that if other changes were to occur to further reduce the benefits of the MLP structure, it would consider changing to a C corporation.

Magellan has made its hay over the years with its refined petroleum pipeline network. There's no denying that it has been an incredibly profitable one because it has allowed management to grow its payout every quarter since its initial public offering at a 12% compounded annual rate. The problem, though, is that there isn't a whole lot of growth left in the pipe (pun fully intended).

Refined product demand in the U.S. has been flat for years and is expected to decline over time as more fuel-efficient and electric vehicles hit the roads. So unless the partnership can expand its network into other regions through significant acquisitions, there will likely only be limited growth options such as small extensions or capacity expansions. That kind of investment isn't going to move the needle like it used to for this $1.26 billion annual EBITDA business.

Management doesn't seem too concerned about this, though, because it has identified an outlet that is poised for immense growth and can leverage its existing assets: export terminals. Increasing shale production in the U.S. means that there is a growing need to export crude oil and refined product, and Magellan's crude oil and refined product networks in the Gulf Coast could easily support export terminals.

Magellan has one operational crude oil import and export terminal but has plans to build another three in the Houston Ship Channel and Corpus Christi, Texas. If all of these facilities were to be built, Magellan would have the capacity to move more than 2 million barrels per day of crude or refined products in and out of the U.S. Some of these terminals are already built into the company's capital plan, which is $1.3 billion through 2019, but there is much more waiting for the green light that could fuel significant growth for decades. 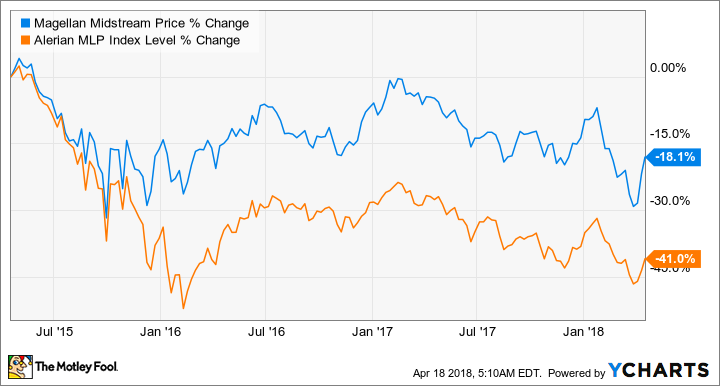 Investors' concerns are being heard, and management is reacting appropriately

Oil and gas pipeline companies are supposed to be these stable investments that have little exposure to commodity prices and pay out hefty cash dividends to their shareholders. Over the past few years, though, the industry has been anything but stable. Dividend cuts, debt woes, and corporate restructurings have wiped out billions in shareholder value. Ever since the Alerian MLP index was created back in 2013, it has declined more than 43% as a reflection of these volatile times.

Deep down, much of the oil and gas midstream industry's woes don't stem from the decline in commodity prices. The underlying problem for years has been management teams that have prioritized growth -- particularly distribution growth -- over anything else. This led to companies paying out every dollar available each quarter and relying heavily on the debt and equity markets to fund expansions. Unsurprisingly, companies that followed this path also happen to be the same companies the blew up and needed to make significant changes to their business model.

Magellan and a select handful of other MLPs have avoided this fate because they elected to partially fund expansions by retaining some of their operating cash flow. Now, many spurned investors in this industry have changed their priorities. Instead of seeking out payout growth at all costs, the focus has shifted to payout security. So those MLPs with high rates of retained cash are now en vogue.

In previous conference calls and presentations, Magellans' management has said it was comfortable running its business with a distribution coverage ratio of 1.1. From an investors standpoint, that is an OK but not great ratio. It leaves the company some wiggle room to get through tough times but doesn't leave much cash to fund growth.

With investors more concerned than ever about the sustainability of payouts, Magellan's management elected to change its payout guidance. Instead of targeting 8%-10% distribution growth for the foreseeable future, it has elected instead to target distribution growth of 5%-8% with a coverage ratio of 1.2 or greater. This will allow the company to fund more of those ambitious export terminal projects with internally generated cash and, according to management, eliminate the need to issue units as a funding source.

Investors might not get the growth they were initially looking for, but management has always leaned on the side of conservatism and long-term shareholder value.

The landscape for Magellan and the rest of the midstream industry is changing at a surprisingly fast pace for such a stoic industry. Between regulatory and tax changes, it can be hard for investors to completely understand the implications of those decisions on the stocks they own. Thankfully for Magellan's investors, its management team has gone out of its way to explain the changes and show why Magellan is still a good value proposition for its unitholders.

With a multibillion-dollar opportunity ahead of it with export terminals, it's encouraging to see management elect to take an even more conservative approach to its payout and preserve balance sheet integrity. If you are a long-term investor, it's hard to not like what Magellan Midstream Partners is doing right now.