Please ensure Javascript is enabled for purposes of website accessibility
Log In Help Join The Motley Fool
Free Article Join Over 1 Million Premium Members And Get More In-Depth Stock Guidance and Research
By Daniel B. Kline – Updated Apr 18, 2018 at 10:49AM

Hint: Some think it makes the world go 'round.

Nearly eight in 10 Americans would rather find love than be wealthy, even though money is still what couples argue about the most, according to a new survey by Personal Capital.

In fact, even though 22% of respondents said they would prefer being wealthy over finding love, only 9% of the more than 2,000 people surveyed consider financial security among the most important qualities in a partner. Compare that with 57% who cited honesty as an important quality in a partner.

"Love should be about the heart, not the wallet, but even the strongest romantic bond will sometimes be tested by financial realities," said Personal Capital Vice President Michelle Brownstein in a press release. 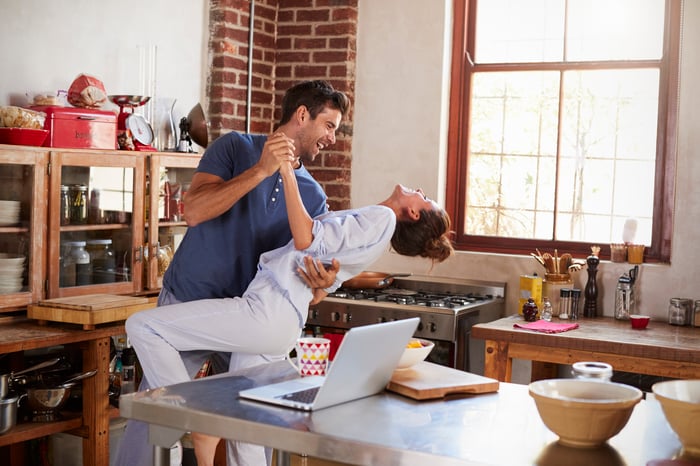 Talk about money early and often in a relationship. Image source: Getty Images.

Significantly more men (26% of men versus 17% of women) would rather be wealthy than find love. The majority of both men (65%) and women (55%), however, would rather share financial statements with their partner than their internet browser history.

"When it comes to money, men and women often have vastly different attitudes, so couples should have those conversations early in a relationship to build a foundation of trust and honesty," said Brownstein. "A good first step is to talk about your financial expectations and priorities: Find out if your partner is a spender or a saver, and think about where each of you hope to be in 5, 10, and 20 years."

While money may not be the reason most people enter a relationship, it's the biggest stress factor for couples by a lot. In fact, twice as many people cited "money" (54%) as the No. 1 stressor next to communication (26%). Those were followed behind work (7%), in-laws (7%), and children (6%).

Respondents were split nearly down the middle when it came to whether who makes more money should have more say in financial decisions. They were, however, in overwhelming agreement (89%) that people should consult their partner before making a financial decision.

As Brownstein explained, the best way to defuse relationship tension due to finances is to communicate. That's not always easy, but not talking can lead to disaster.

For many couples, financial situations will change over the years. Children may enter the picture, you might buy a house, or one of you may stop working. Whatever the circumstance is, address it openly and honestly. Don't hold back. If you resent your partner for not making "enough" money or for working too much, bring it up in a positive way.

A couple should be prepared to make sacrifices for the greater good. That may mean not buying something you want or sticking to a budget that's stricter than you would have picked on your own.

Have the talk, compromise, and then embrace whatever plan you agree on. That's the best path to keep money from ruining an otherwise successful relationship.