It can be difficult to track down the right stocks that will continually pay investors over the long haul, and even harder to find ones that do that and trade at a discount. To help you with your search, we asked a few Motley Fool contributors for several companies that meet these criteria, and they came back with Hasbro (NASDAQ:HAS), Best Buy (NYSE:BBY), International Business Machines (NYSE:IBM). Read on to find out why. 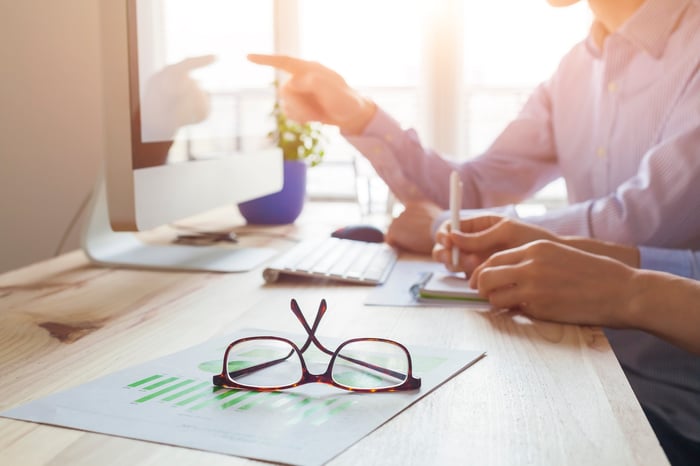 What will happen to all the toys?

Nicholas Rossolillo (Hasbro): Perhaps you heard? Brick-and-mortar retailer Toys R Us is liquidating its business. There are various bidders for what remains of the company that is keeping some hope alive, but in the meantime, the uncertainty has affected toy-maker Hasbro.

Toys R Us is one of the industry's leading retailers and Hasbro's second-largest customer, so the closure of the chain could be a big blow to future sales. Add to that the company's "partner brands" sales -- which include names like Disney's (NYSE:DIS) Star Wars and Frozen -- declined 10% in 2017. Hasbro's stock is down about 10% in the last month as a result.

The stock drop takes the trailing-12-month P/E ratio down to 28.2. Paying for 28 years' worth of profit is hardly a bargain. However, trailing-12-month price-to-free cash flow is at a much more reasonable 19.0, and forward P/E is at 15.6. Plus, Hasbro pays a dividend yielding 3%, making the stock an income-generating value for retired investors.

More important than the financial metrics, though, is the business itself. Hasbro is a big global brand and is well diversified. Besides an extensive list of partner brands, the company also owns names like Transformers, Monopoly, and My Little Pony. Its enterprise extends beyond toys, too, with video-game, movie, and television segments. Despite recent headwinds, revenues grew 4% during 2017, and management thinks it will recover from the Toys R Us debacle by the middle of this year. That all adds up to a discount on a quality business that is still growing in spite of turbulence in the retail world.

Rich Duprey (Best Buy): Being embraced by a former adversary because you've engineered one of the most remarkable turnarounds in history that "is going to be written about and talked about for a long time" is an achievement few executives can point to. But Best Buy and CEO Hubert Joly have that distinction as Amazon.com (NASDAQ:AMZN) CEO Jeff Bezos extolled the virtues of their latest partnership.

The electronics superstore was brought to the brink of ruin by the e-commerce giant, but Best Buy has bounded back in a resounding fashion such that Amazon has turned to it in an exclusive partnership to sell new Amazon Fire TV Edition smart TVs. Amazon gets the benefit of having its new TVs in Best Buy stores, and the retailer wins whether a customer tries to buy one in-store or online.

The Best Buy of today is not the same as the one of only a few years ago. It is stronger, more financially fit, and has a number of competitive advantages over even Amazon that make it a unique retail play -- one investors should consider for a retirement portfolio.

It is likely Best Buy's Geek Squad, which Amazon has tried to emulate (though apparently not successfully enough), that persuaded it to partner with the electronics superstore for this exclusive deal.

Despite Best Buy's stock having grown by 55% over the past year, it still trades at only 17 times trailing earnings and 14 times next year's estimates. But it still goes for only a fraction of its sales, which grew by 7% last year on a better than 5% increase in comps. With a dividend of $1.80 per share that offers a respectable 2.3% yield, Best Buy is a unique story that shows the continued importance of brick-and-mortar stores in an e-commerce-driven marketplace.

Big Blue at a big discount

Chris Neiger (IBM): Investors who are looking for a stock that has a strong dividend, with decades of annual increases, and that's trading at a discount may want to consider IBM. The tech company pays its shareholders a dividend yield of 3.8% right now, it has a solid 22-year track record of raising it, and its shares trade at just 10.5 times the company's forward earnings.

IBM is transitioning from its old legacy businesses to cloud computing and artificial intelligence (AI), and I'll admit that the company still hasn't quite found its footing yet. The company struggled for years to turn its falling sales around, and it has a bit, but sales in the first quarter grew just 5% year over year to $19.1 billion. The good news is that IBM's total revenue for the full year is expected to continue growing, and management expects free cash flow of $12 billion this year.

IBM is also seeing some success with its cloud computing segment, which grew sales by 20% year over over to $4.2 billion in the first quarter. If that weren't enough, the company has its sights set on the growing artificial intelligence market as well. IBM is betting heavily on its Watson AI services because it believes the cognitive computing market will be worth $2 trillion by 2025.

We've been building new platforms and solutions while modernizing existing ones, embedding cloud and AI into more of what we offer. And so IBM is now a Cognitive Solutions and cloud platform company focused on the high-value areas of IT.

Investors will certainly need to be patient with IBM as it begins tapping into these new markets. But retirees looking for a tech stock that can be picked up on the cheap -- and that's likely to pay a high yield for many more years to come -- may find exactly what they're looking for in IBM.