However, J.C. Penney stock has surrendered all of those gains since early March, when the company published a somewhat disappointing forecast for 2018. J.C. Penney expects comp sales to rise 0% to 2% this year, with earnings just slightly better than breakeven. 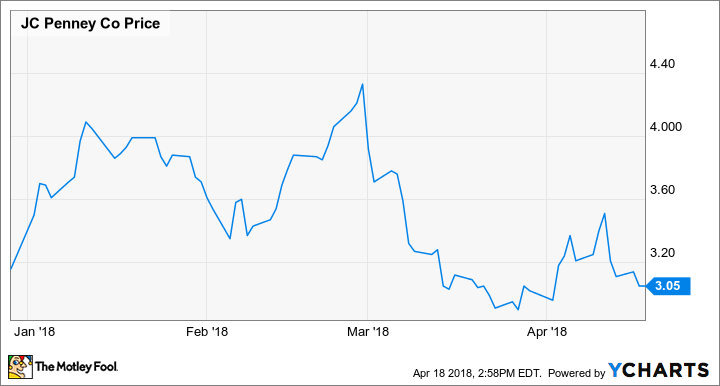 However, the outlook for J.C. Penney stock could be improving as competition in the department store sector starts to wane. Sears Holdings (NASDAQ:SHLDQ) recently revealed another round of store closures. Furthermore, Bon-Ton (NASDAQ: BONT) announced this week that it will liquidate after its attempt to emerge from bankruptcy as a going concern failed.

Sears Holdings shuttered 123 Sears full-line stores during fiscal 2017, nearly 20% of the total. Many of these locations closed during the last few months of the fiscal year. Since the beginning of fiscal 2018 in early February, Sears has closed another 39 full-line stores.

These store closures are creating huge sales opportunities for nearby J.C. Penney stores. In the past two years or so, J.C. Penney has reintroduced appliances in most of its stores and beefed up its mattress, furniture, and home services offerings in order to capitalize on Sears' woes.

Last week, Sears confirmed plans to close another 11 full-line stores by the end of July. Of these 11, eight are in malls that also have J.C. Penney stores and one has a J.C. Penney across the street. All nine J.C. Penney locations already have appliance departments.

While these stores represent just 1% of the J.C. Penney chain, there will probably be plenty of other Sears store closures before the end of 2018. Thus, the recent trend of sales gains at Sears' expense should continue in a big way for J.C. Penney during the next several quarters.

J.C. Penney shareholders recently received more good news, with Bon-Ton announcing that liquidators won a bankruptcy auction for the company's assets. Bon-Ton had already closed 47 of its roughly 260 stores since the beginning of 2018, but it is now set to close the rest within the next few months.

A recent report by Morgan Stanley found that 28% of Bon-Ton's stores had a competing J.C. Penney store within a one-mile radius -- in most cases, in the same mall. There is a J.C. Penney within 10 miles of 56% of Bon-Ton locations, according to the same study.

On average, Bon-Ton's chains cater to somewhat wealthier consumers than J.C. Penney. Still, there is plenty of overlap between their customer bases. Furthermore, after Bon-Ton closes all of its stores, J.C. Penney will be the only department store chain with a physical presence in some smaller markets, which will help it gain market share.

Despite its recent woes, Bon-Ton still had roughly $2.5 billion of revenue last year. Capturing just 5% of that business would lift J.C. Penney's comp sales by 1 percentage point and improve its profit margin significantly. That could give J.C. Penney stock a big boost.

It will take time to see the benefits

The most recent round of Sears store closures and the Bon-Ton liquidation probably won't be completed until July. In the meantime, J.C. Penney could face some sales headwinds. Most notably, more than 200 Bon-Ton stores will be running liquidation sales over the next few months, offering deep discounts that could pull shoppers away from J.C. Penney.

However, in the second half of fiscal 2018, J.C. Penney should be able to start capitalizing on the tamer competitive environment. This could create upside to its sales and earnings guidance, powering a rebound in J.C. Penney stock.