The supplies and equipment wholesaler generated strong results despite a delayed start to the 2018 pool season.

We'll cover these details below, but before jumping off the diving board, let's first review the headline numbers from Thursday's report:

What happened with Pool Corporation this quarter? 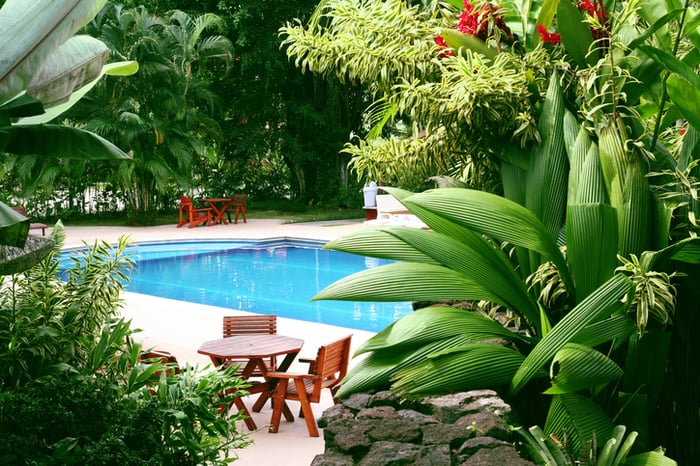 Following a strong finish to 2017, we are poised for continued solid growth in 2018 as consumer demand for outdoor living products remains high. We generated record sales and income in the first quarter of 2018 despite inclement weather in Texas and seasonal markets, which resulted in a slower than expected start to the 2018 swimming pool season.

Pools are opening later than in 2017 in seasonal markets, and remodeling and new pool construction activity has been delayed. We believe that the industry has a strong backlog due to pool owner demand for pool upgrades and remodeling, and we expect deferred sales related to pool openings to shift to the second quarter.

A long winter season across the U.S. has pushed back pool projects in many regions, and it's possible that some of this industry backlog may also benefit Pool Corporation as far as the third quarter. As a point of clarification, Pool Corporation primarily sells products, not services. So, the deferred sales de la Mesa refers to above shouldn't be mistaken for deferred revenue already in hand for the company. Instead, de la Mesa is simply discussing purchases customers have hit the pause button on for the time being.

In its earnings release, Pool Corporation increased its outlook for 2018 diluted EPS from a previous range of $5.36 to $5.61, to a new band of between $5.45 and $5.70. However, this slight bump is technical in nature, reflecting additional tax benefits expected to be derived this year from adoption of ASU 2016-09. While the first quarter of the year was particularly impressive given the poor weather, investors hoping for an upward revision to earnings estimates will have to wait and see what the high pool season (over the next two quarters) brings.

Here's Why Pool Corp. Stock Was Down Today