Amazon (NASDAQ:AMZN) is often blamed for the death of many brick-and-mortar retailers. As more consumers buy products online and join Amazon's ever-expanding Prime ecosystem, retailers wither as their store traffic dries up.

Not every retailer is doomed. There are still plenty of resilient brick-and-mortar chains that Amazon can't touch. But for every survivor, there are plenty of weaker chains caught in the blast zone of Amazon's Death Star. 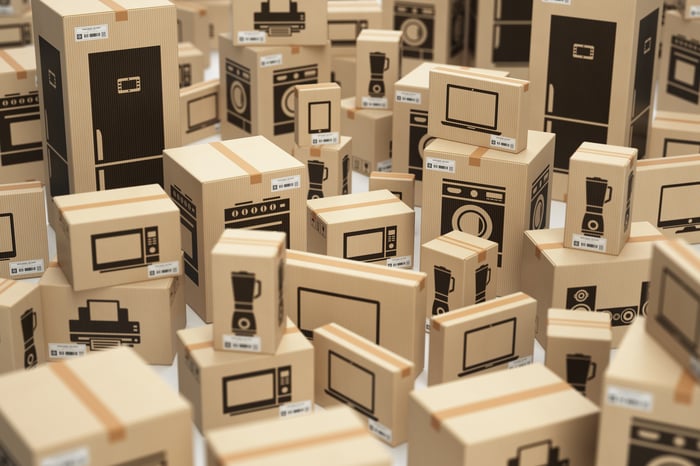 One such retailer is Bed Bath & Beyond (NASDAQ:BBBY), the superstore that has lost more than 75% of its market value over the past three years. The bears don't think that decline is over yet, and 14% of the stock's float was still being shorted as of Apr. 10. Its insiders also aren't confident in its future, with the number of shares sold outnumbering the number of shares purchased by 20-to-1 over the past 12 months.

I sometimes take a contrarian view of hated stocks like Bed Bath & Beyond. Unfortunately, I think this one still needs to drop more before it can be considered a bargain.

Bed Bath & Beyond mainly sells home goods. This business model worked well for most of its 47-year history. But in recent years, the company has struggled with competition from Amazon, Walmart, Target, and other superstores, which offer similar products alongside a wider variety of goods.

Over the past 16 years, Bed Bath & Beyond has tried to diversify its business with the acquisitions of Harmon Stores, Christmas Tree Shops, Buy Buy Baby, Cost Plus, Linen Holdings, Of a Kind, One Kings Lane, and PersonalizationMall.com. The company currently operates 1,017 Bed Bath & Beyond stores, 276 Cost Plus/World Market stores, 119 Buy Buy Baby stores, 83 Christmas Tree/That! Stores, and 57 Harmon stores.

That expansion boosted Bed Bath & Beyond's revenue, but most of those new stores were still battling it out with Amazon and Walmart. To stay competitive, Bed Bath & Beyond resorted to markdowns (mainly through coupons) while boosting its marketing spend, which caused its operating margin to drop from the mid-teens to the single digits over the past five years. 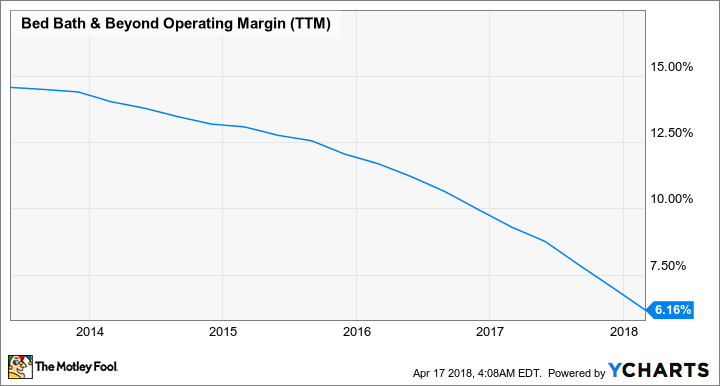 Bed Bath & Beyond's revenue gradually rose during that period, but its earnings plummeted as margins contracted. 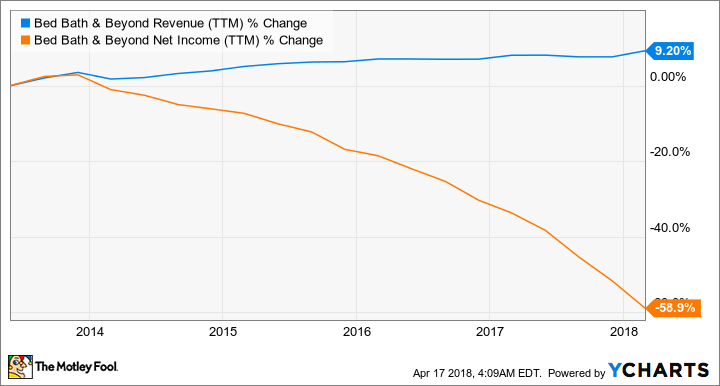 Analysts expect that pain to continue with the company's revenue and earnings falling an estimated 1% and 25%, respectively, this year. When faced with these problems, retailers generally shutter weaker stores and cut costs. Yet Bed Bath & Beyond closed only three namesake stores and five World Market stores last quarter while opening one World Market and one Buy Buy Baby store. That's a net reduction of just six stores.

On the e-commerce front, Bed Bath & Beyond is expanding its Beyond Plus membership program, which targets Amazon Prime and Walmart's new free shipping options. But Beyond Plus, which costs $29 per year, arguably goes too far by offering free shipping and a 20% discount on a customer's entire order. It's hard to see how the company makes a profit from that plan, and the competitive headwinds don't give it much room to raise prices.

During last quarter's conference call, Bed Bath & Beyond CEO Steven Temares said that the company is focused on boosting its comps throughout 2018 and 2019, "moderating" its earnings declines "this year and next", and finally "growing" its EPS by 2020.

It plans to do this by offering a wider variety of merchandise, applying dynamic pricing through artificial intelligence, expanding Beyond Plus, offering faster delivery options, adding in-home services, and improving its customer experience across all channels.

That growth plan sounds optimistic, but the escalating arms race between Amazon and Walmart could sink those turnaround efforts. A more likely outcome would be Bed Bath & Beyond getting hooked on using markdowns to drive revenue growth, which would put even more pressure on its profitability.

If Bed Bath & Beyond takes meaningful steps toward boosting its earnings -- like closing stores, selling off non-core brands, and reducing its markdowns and promotions -- I might consider it a decent turnaround play. But for now, it remains in the direct path of much bigger competitors, and it's standing still like a deer in the headlights.

The Bears Are Right: Amazon Is Killing This Retailer @themotleyfool #stocks $BBBY $AMZN Next Article
Current