Please ensure Javascript is enabled for purposes of website accessibility
Log In Help Join The Motley Fool
Free Article Join Over 1 Million Premium Members And Get More In-Depth Stock Guidance and Research
By Lee Samaha – Apr 20, 2018 at 6:32AM

An in-depth look at the key metrics to pay attention to when the aviation giant updates investors.

The Boeing Company (BA 5.92%) reports earnings on April 25 and it will offer a snapshot into the development of the company's long-term strategic objectives. Let's explore the three key things investors should be looking out for in the earnings presentations.

A strong environment for passenger traffic and airline profitability is usually good news for Boeing airplane orders. In turn, orders usually mean production ramps and margin expansion as unit cost per airplane produced tends to drop as more are produced. 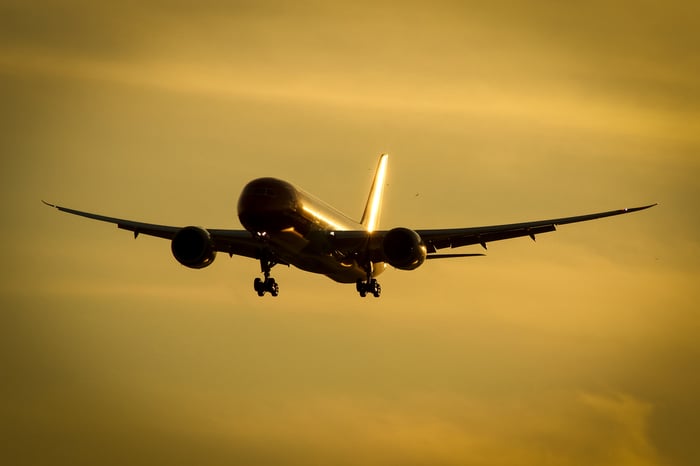 As such, Boeing's full-year 2018 guidance calls for its commercial airplanes (BCA) segment to expand operating margin to above 11% from 9.6% in 2017. For reference, Boeing expects BCA to contribute around 62% of total company revenue in 2018 -- defense, space, and security is expected to contribute 23% with the rest coming from global services.

As Bernstein analyst Doug Harned pointed out on the last earnings call, Boeing's BCA guidance would be the best ever and management has previously talked of 15% BCA margin for 2020. In response, Boeing CEO Dennis Muilenburg said he expected "progress to be steady over a multi-year time frame to achieve that long-term target."

All told, investors should look out for BCA margin performance and for management to reaffirm its targets for 2018 and beyond. Given that BCA operating margin was 11.5% in the fourth-quarter (9.6% for the full-year) the near-term target of 11% plus for 2018 looks achievable. As for the 2020 target, Muilenberg's plan calls for more reductions in the cost structure including labor and supply chain costs. 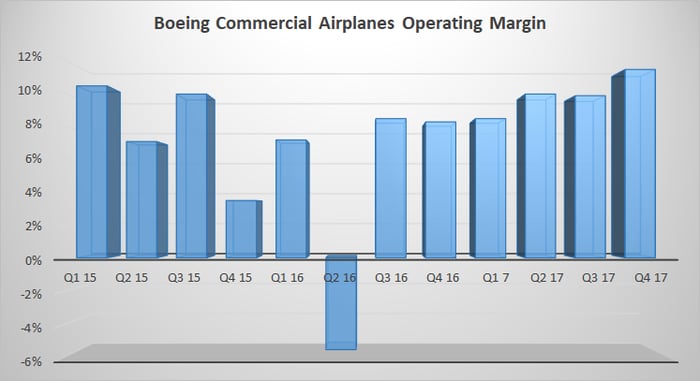 BCA will get to its expected margin provided its production plans progress as expected, and that's going to need two key things:

The table below gives readers a better handle on what Boeing has planned for production on its major aircraft programs:

Speaking on the last earnings call Muilenburg said, "We continue to assess the upward market pressure on the 737-production rate," and investors should look out for any commentary on the matter. In a nutshell, Boeing might feel compelled to try and increase its production to encourage orders from buyers unwilling to wait for deliveries due to its extended backlog.

On the other hand, the ramping of production brings about difficulties, as seen when Boeing 737 fuselage supplier Spirit AeroSystems' (SPR 10.40%) CEO Thomas Gentile talked of "challenges in 2017" meeting the production rate on the Boeing 737. He also claimed Spirit was "starting the year recovering from those challenges, but we fully expect to get back into control as we get into that early to mid-part of the year and achieve the rate increases for this year."

Turning to the Boeing 777 aircraft program, on the last earnings call Muilenburg acknowledged that "we still have more work to do to fill the remaining 777 production slot," but went on to express his belief that the plan -- involving the production rate cut to 3.5 on the 777 -- would support "our production bridge from the current 777 to the 777X." Here again, investors should monitor any commentary on the issue, because the 777 is a highly profitable plane for Boeing.

Boeing uses a program accounting method to account for revenue and cost over the lifetime of an aircraft program. Theoretically, as the unit cost of each additional aircraft falls as more are produced, and revenue goes up, the deferred production cost should fall. If Boeing can't reduce the deferred production cost in accordance with its plan then the company will be forced to take a writedown on the program.

As you can see below, the deferred production cost on the 787 is indeed falling and the planned production ramp in 2019 (see table above) will surely help. For now, investors need to see that the figure falls in line with expectations. 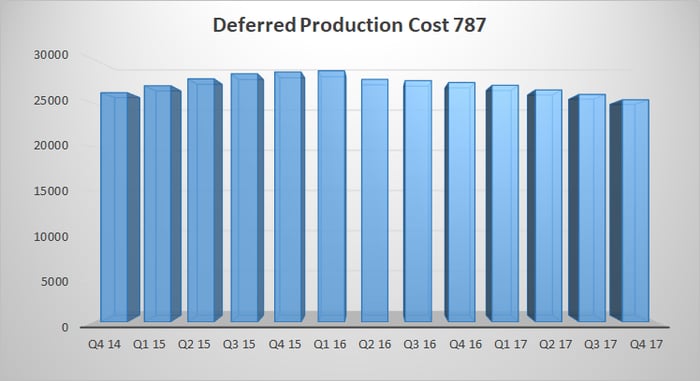 All told, investors need to be reassured that Boeing is on track with its production targets and costs are kept under control. Successful execution of its production plan is likely to induce more orders and ultimately increase the long-term profit potential at Boeing -- the key to Boeing's long-term growth prospects.