Please ensure Javascript is enabled for purposes of website accessibility
Free Article Join Over 1 Million Premium Members And Get More In-Depth Stock Guidance and Research
By Adam Levy - Apr 20, 2018 at 10:01AM

Apple is reportedly working on a news subscription service. Why investors shouldn't worry about its profitability.

Apple ( AAPL -1.17% ) is well on its way to its goal of doubling services revenue to about $50 billion by 2020, as the growth of the App Store and subscriptions like iCloud and Apple Music have helped grow the top line for this segment.

The tech giant is reportedly looking to develop another product to add to its growing line of services: a news subscription. Following its acquisition of Texture -- which offers unlimited access to hundreds of digital magazines for $9.99 per month -- Apple is moving to integrate the product with Apple News, according to a report from Bloomberg.

A $9.99 per month subscription price for a news service could produce a relatively high profit margin, but it wouldn't likely move the needle for Apple in terms of profits. Still, Apple's focus with its subscription services shouldn't be profits; it should be subscribers. Its goal should be to break even on subscription revenue and lock customers into the broader Apple ecosystem. 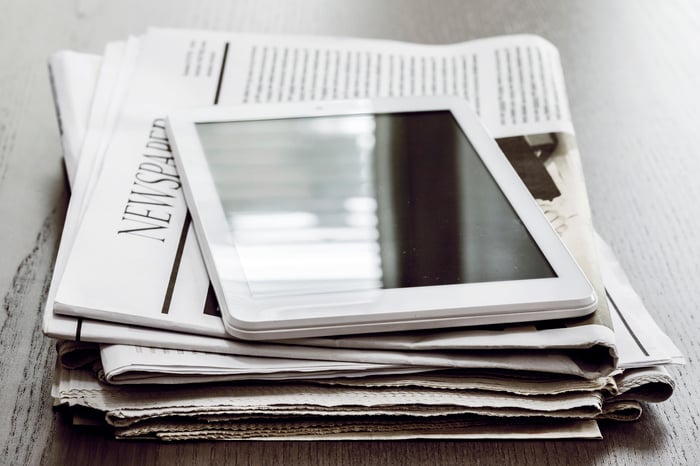 The opportunity in news

There's currently a big opportunity for a premium news service. About two-thirds of American adults get at least some of their news from social media companies like Facebook ( FB -1.14% ), but there's a growing mistrust between Facebook and its users.

That suspicion stems not only from whether the news information people find on Facebook is trustworthy, but whether Facebook can be trusted with all the user data it collects. Apple has been outspoken about its efforts to protect user privacy, and it could leverage that position as it launches a news product.

That said, most people aren't used to paying for their news. But if Apple can price it right and put together a trustworthy premium product, it could convince a lot of people to pay for news again. As long as it's not losing money on the service, it should work in Apple's favor.

The break-even, lock-in strategy in effect

A recent analysis of Apple Music by Macquarie Research analyst Ben Schachter showed that the streaming service isn't very profitable. Schachter based his conclusion on newly public data from Spotify, which gave greater transparency into how much music streaming services pay out in royalties. Spotify, despite its massive scale, still pays out about 80% of revenue in royalties.

Overall, Schachter estimates Apple Music has a gross profit margin of just 15%. After adding in all the operational costs, Apple might not even be breaking even on the service. But Apple Music can boost sales of the company's hardware such as the iPhone, headphones, and Apple Watch, which all produce very good margins on high selling prices. Likewise, a subscription Apple News service could perhaps boost sales of the iPhone and iPad.

The long-rumored Apple Video service (currently integrated with Apple Music) could potentially spur sales of Apple TV or the iPad. That said, streaming video is exceptionally difficult to produce a profit on without significant scale. Even Netflix is still burning billions in cash every year.

The gap between Apple's hardware products and its competitors is narrowing -- some might argue that it no longer exists at all. Offering consumers a service like a premium news subscription that's best experienced on Apple hardware is another way to differentiate Apple products from the rest of the pack.

With the phone-upgrade cycle extending, and consumers holding on to their devices for longer in general, Apple has fewer opportunities to win new customers. As such, it needs to do everything it can to ensure that when customers do decide to upgrade their devices, they choose an Apple one more often. If those customers already have a subscription service from Apple, that will certainly sway their decision.

As long as services like Apple Music or the planned news service or rumored video service exhibit a positive influence on future device purchases for Apple, they don't need to produce a profit as a stand-alone business.

The fact that Apple doesn't need to focus on profits for its subscription services gives it a distinct advantage over stand-alone services (e.g. Spotify, Netflix, Texture). That should enable it to offer more value to customers and increase its total subscriber base, hopefully creating a meaningful impact on its device sales in the long run.