Please ensure Javascript is enabled for purposes of website accessibility
Log In Help Join The Motley Fool
Free Article Join Over 1 Million Premium Members And Get More In-Depth Stock Guidance and Research
By Daniel B. Kline - Updated Apr 20, 2018 at 4:38PM

For a long time, the primary appeal of many quick-serve restaurants chains lay in their ability to pump out moderately tasty meals extremely rapidly. Speed, however, seems to be less of a top concern as the leaders in this space have raised their quality standards -- and with them, consumers' expectations.

"In this year's study, we saw that scores on the Composite Loyalty Index for QSR brands across all categories declined from last year," said Market Force Chief Customer Officer Brad Christian in a press release. "We attribute this to two factors: consumer expectations of the QSR experience are rising, and, in many cases, execution at these restaurants is declining.

None of the category winners is the biggest player in its segment. While four of the five are nationally well known, they are also brands that you could argue have a bit of a cult-like following.

That's certainly true of In-N-Out, which won for burger chain, and Chick-fil-A, which took the top spot in chicken. Mexican winner Chipotle (CMG 1.56%) certainly once had that sort of cachet, and its top placement is a strong sign that its comeback has taken hold. Sandwich winner Wawa is a regional player, but it has a strong reputation as a convenience store that offers quality, handmade food. However, it's Pizza Ranch that may be the biggest surprise on the list, given that it has a mere 200 locations across 13 states.

"As our research continues to show, delighting guests by providing an exceptional customer experience is a key differentiator in an incredibly competitive environment," Christian said. 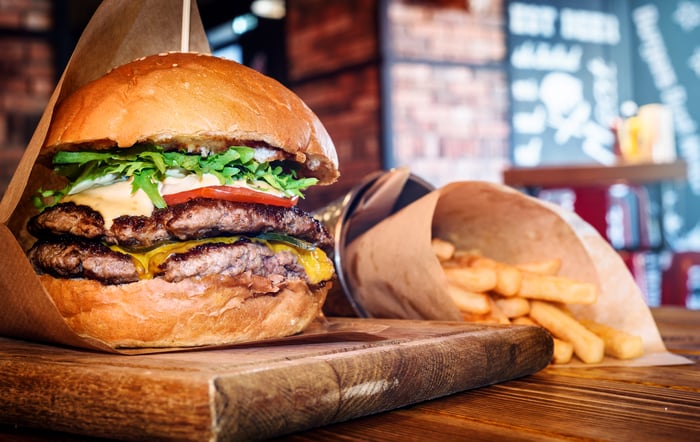 In-N-Out took the top spot for the second year in a row. It was followed by Culver's in second and Five Guys in third. In-N-Out also received the highest scores across all QSR food categories studied, making it America's favorite QSR across the board.

Bigger brands did not do as well. Restaurant Brands International's Burger King, Jack in the Box and McDonald's ranked lowest among the 13 burger chains in the survey.

Wawa's win is a bit historic: It's the first time a convenience store has taken the top spot in the category. That may be bad news for traditional sandwich shops, as the chain has been expanding quickly, and its customers can fill up their gas tanks (usually at very competitive fuel prices) while waiting for their food to be made to order.

Again, the biggest names did not perform as well. Arby's came in last in nearly all of the measured categories.

While Chipotle has struggled to win back customers since its E. coli outbreak more than two years ago, it took first place in the Market Force study both in 2017 and 2018. This year, it narrowly beat out second-place finisher El Pollo Loco, which overtook Moe's Southwest Grill, last year's runner-up. Qdoba came in fourth. And, as you might imagine based on the other categories' results, Yum! Brands' Taco Bell ranked at the bottom.

Clearly, respondents to this survey showed their love for smaller players, a pattern that's most evident in the pizza category. Pizza Ranch, which has fewer restaurants total than Domino's (NYSE: DPZ) has in South Korea alone, took the top rank. It was followed by Papa Murphy's in second, and last year's winner Marco's Pizza in third. Those lesser-known chains were followed by Domino's in fourth and Papa John's in fifth.

Chick-fil-A is a dynasty

Not only did Chick-fil-A win its category for the fourth straight year, it received the highest score across every category of the study except for "healthy options." Raising Cane's came in second, followed by Zaxby's and El Pollo Loco, which tied for third. Boston Market took the next spot followed, by RBI's Popeyes. Yum's KFC came in last of the 10 chains considered.

To rank on the study, a chain had to receive at least 2% of the total votes. That system allowed smaller brands to rank even though they likely were not mentioned by many of the respondents.

What's clear from this report is that the quick-serve market has room for disruption. Small chains like Pizza Ranch or In-n-Out can build a loyal audience -- but whether either can scale nationally and retain what makes customers love them remains to be seen.

Consumers clearly spend a lot of money at the biggest players, despite their poor rankings in this study. That suggests those chains could be vulnerable, but Domino's and McDonald's specifically have shown repeatedly that convenience and value can drive business, even when consumers aren't as in love with the food being served.