Please ensure Javascript is enabled for purposes of website accessibility
Log In Help Join The Motley Fool
Free Article Join Over 1 Million Premium Members And Get More In-Depth Stock Guidance and Research
By Keith Speights - Apr 22, 2018 at 9:32AM

Aurinia might make investors a lot of money. But there's no guarantee.

Gordon Gekko famously stated, "Greed, for lack of a better word, is good."

That statement comes to mind when I think about Aurinia Pharmaceuticals (AUPH -2.24%). The potential for the clinical-stage biotech appears to be so great that getting greedy with the stock is tempting.

But, of course, Gordon Gekko is just a fictional character played by actor Michael Douglas in the movie Wall Street and its sequel. And even in the movies, Gekko ultimately winds up in jail. Greed isn't good, even with a promising stock like Aurinia. 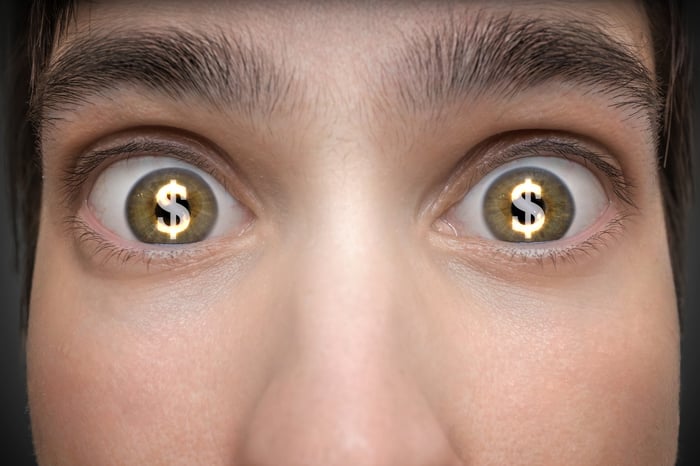 Getting greedy with Aurinia Pharmaceuticals stock is tempting because there's a lot to like. The biotech announced positive results in March 2017 from a phase 2 study of voclosporin in treating lupus nephritis. Just how good were those results? Really good.

These were the best efficacy results from any global lupus nephritis study ever. And it wasn't just that voclosporin appeared to be effective. Safety results from the study also looked great. There were three deaths and one malignancy reported after completion of the treatment period. However, these reports came from the control arm and not either of the groups of patients taking voclosporin.

Aurinia advanced voclosporin to a pivotal phase 3 clinical study in May 2017. The biotech expects to complete enrollment in this study in the fourth quarter of this year. Since voclosporin received fast-track designation from the Food and Drug Administration, Aurinia is eligible to submit sections of its New Drug Application (NDA) for the drug on a rolling basis rather than wait until the NDA is fully completed. The company intends to begin its rolling NDA submission in the second half of 2018.

If voclosporin does win approval, Aurinia should have a huge market all to itself. There are no drugs currently approved for lupus nephritis in the U.S. or in Europe. The annual medical costs for lupus nephritis are among the highest of any disease. Voclosporin could rake in in the ballpark of $1.6 billion per year if approved.

A lot to lose

While there's a lot to like about Aurinia, there's also much to lose if problems arise. It's easy to get excited about positive phase 2 results and think eventual approval is a shoo-in. But it never is. Even big biotechs can be jinxed.

Celgene, for example, thought that GED-0301 (mongersen) could become a huge success based on phase 2 results from the drug in treating Crohn's disease. The company had projected sales of $2 billion or more for the drug, even ranking GED-0301 among its top three pipeline prospects. However, the drug flopped in a phase 3 study.

Likewise, Incyte had high hopes for cancer immunotherapy epacadostat. The drug looked pretty good in phase 2 testing, so it advanced to a phase 3 study in combination with Merck's Keytruda as a first-line treatment of metastatic melanoma. Market research firm EvaluatePharma projected that epacadostat would be the third-biggest new drug launch of 2018, based on an assumption the drug would be successful in the phase 3 study. It wasn't.

Both Celgene and Incyte saw their stocks take a beating after the clinical setbacks. However, both companies already had products on the market as well as other drugs in development. That's not the case for Aurinia, though. All of the biotech's prospects ride on voclosporin.

The reality is that there are more drugs like GED-0301 and epacadostat than you might think. Less than half (49.6%) of all drugs in phase 3 studies between 2006 and 2015 ultimately won regulatory approval, according to a report by industry trade group Biotechnology Innovation Organization.

I'm not saying that voclosporin will fail in its phase 3 study like Celgene's and Incyte's drugs did. I think Aurinia's drug has a really good shot at succeeding. What I am saying, though, is that investors need to keep the possibility of failure in mind when buying Aurinia stock.