Of the top three marijuana stocks in terms of market cap, only Aurora Cannabis (NASDAQ:ACB) reported positive earnings over the last 12 months. The stock's price-to-earnings (P/E) ratio currently stands at a whopping 488.

Based on these conventional valuation measures, all three of these top marijuana stocks certainly appear to be way overpriced. But there's a simple reason why marijuana stock valuations really aren't as sky-high as they might seem. 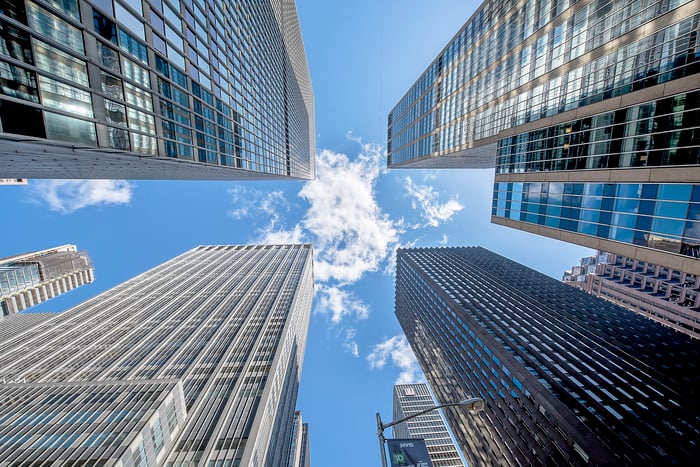 The P/E ratio for Aurora and the P/S ratios for Canopy Growth and GW Pharmaceuticals are trailing-12-month values. These numbers only show what has already happened for companies. But the future prospects for a company are much more important in determining its value. Investors would rather have binoculars than rearview mirrors.

It wouldn't be too big of a problem using retrospective measures like P/E and P/S if previous sales and earnings weren't too far off from companies' potential future sales and earnings. However, that's not the case for any of these marijuana stocks.

Aurora Cannabis and Canopy Growth currently make most of their revenue by providing medical marijuana in Canada. But just look at how quickly those sales are growing. Aurora's revenue in its last quarterly update more than tripled its prior-year result and jumped nearly 42% from the previous consecutive quarter. Canopy Growth posted a year-over-year revenue increase of 123%.

Those numbers also included some sales in Germany for both Aurora and Canopy. However, the German medical cannabis market is only in its early stages. Even greater growth should lie ahead.

Aurora's P/E ratio and Canopy's P/S ratio don't reflect the likelihood of turbocharged sales resulting from legalization of recreational marijuana in Canada. The country took a big step forward in the legalization effort in March, thanks to a key Senate vote.

What about GW Pharmaceuticals? The biotech's astronomical P/S ratio primarily includes sales of cannabinoid oral spray Sativex and collaboration revenue. However, GW's trailing-12-month sales don't factor in the potential for its cannabinoid epilepsy drug Epidiolex, which market research firm EvaluatePharma thinks could be one of the biggest new drugs launched in 2018.

The bottom line is that marijuana stocks' valuations are better than they might seem because they have significant growth prospects. However, determining just how much these stocks can actually grow can be tricky.

For example, estimates of the Canadian marijuana market are as low as $4.2 billion to as high as $12 billion per year. That's a wide range, and it makes a big difference in assessing growth-based valuations for marijuana growers.

Then there's the potential supply glut that could be on the way. Canadian marijuana growers are ramping up capacity so quickly that supply appears likely to exceed demand in the not-too-distant future. Such a scenario would result in lower marijuana stock valuations.

But we also have to throw in another twist: increased global markets for medical marijuana. With Germany and a long list of other countries allowing legal use of medical marijuana, concerns about a supply glut could be overdone.

It's a somewhat similar story for GW Pharmaceuticals. Pessimistic analysts think Epidiolex could only generate annual sales of $300 million. Optimists have pegged peak annual sales for the drug at $2 billion. GW Pharmaceuticals stock looks like a bargain if the higher level is attainable, but it looks way overpriced if Epidiolex sales are closer to the lower number.

Canopy Growth's market cap currently stands north of $4.5 billion. GW Pharmaceuticals' market cap is $3.7 billion, just a little higher than that of Aurora Cannabis. Are these valuations too high? It depends.

As for GW Pharmaceuticals, I suspect that EvaluatePharma's projection of around $1 billion in sales for Epidiolex by 2022 isn't too far off the mark. That level would certainly mean that GW stock isn't exorbitantly priced right now. And if the company's pipeline delivers on its potential, the biotech stock could have plenty of room to run.

Of course, using growth in valuing stocks is literally a guessing game. Guesses can -- and often do -- turn out to be wrong. Marijuana stocks truly might be overpriced. But even with horrible guessing at growth prospects, the stocks' valuations aren't nearly as sky-high as they appear to be at first glance.