Bed Bath & Beyond's (NASDAQ:BBBY) fiscal fourth-quarter earnings report presented exactly what we've come to expect from the home furnishings retailer, which is to say a disheartening mishmash of ideas with no real direction. Worse, management's best-case scenario implies there are several more years like this ahead of the company before the situation improves.

Although Bed Bath & Beyond beat analyst expectations with revenue of $3.72 billion and adjusted earnings of $1.48 per share, which excluded the negative impact from the Tax Act, profits were down 20% from last year and management said it didn't expect per-share earnings to start growing again until 2020. 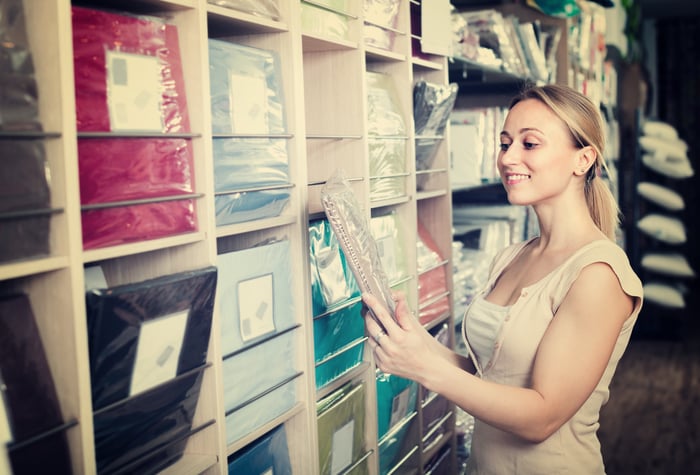 The home goods retailer is caught in a bind. Under continued pressure from brick-and-mortar rivals like Walmart and Target, as well as online retailers such as Amazon.com and Wayfair, Bed Bath & Beyond is getting squeezed from all sides and is suffering from a protracted decline in same-store sales that has now lasted nine straight quarters. Comps were down 0.6% in the fourth quarter.

Even so, it is still spending shareholder capital on buying back stock, having spent $250 million during the quarter to repurchase 2 million shares. Over the last five years, the company has spent more than $6 billion buying back stock, as Bed Bath & Beyond's shares have lost three-quarters of their value during that time.

Although management might feel its stock is a good value, so spending money on it was a good use of shareholder resources, investors likely view it as a waste considering there's been nothing to suggest Bed Bath & Beyond shares deserved a higher value. It was money that could have been spent on shoring up its deficiencies rather than propping up its earnings per share numbers.

Yet management's latest solutions to the problem aren't much better as all they seem to do is stitch together a crazy quilt of ideas that spans beefing up its digital and online capabilities to creating a "treasure hunt" atmosphere in its stores to drive more customer traffic.

Of the $376 million the company spent on capital expenditures last year, half was directed toward technology projects. After years of neglecting the online space, it was forced to spend trying to catch up to the competition. But Bed Bath & Beyond has been fairly vague about what exactly it spent this money on. CEO Steve Temares cited "development and deployment of new systems and equipment in our stores" while pursuing greater inventory optimization strategies. While seemingly committed to pursuing its digital transformation project, it's also undertaking a major redevelopment of the platform, meaning it's going to cost even more money to implement.

Now the home goods retailer is increasing the number of deep-discount products that it plans to seed throughout its stores to entice customers inside. CEO Steve Temares has previously said a treasure hunt item was one that was "new, fresh, and/or has limited availability," and could be found within furnishings, decor, and seasonal departments, but now cheap goods will be part of the mix, too.

That approach might be risky, though, since the company is already limiting the availability of products the retailer is known for -- home furnishings -- while boosting the amount of tchotchkes that may or may not interest its customers. There's no guarantee it will work and it seems more like another desperate measure.

Less is not more

In March, Bed Bath & Beyond began repositioning its stores to be more display-oriented, showcasing an eye-popping selection of goods customers could only purchase online. Because the company says it can't possibly carry everything a customer might want in its stores, showing them what's available and allowing them to buy it online makes a certain amount of sense.

Yet it's an expensive proposition to use your stores for display purposes while populating the shelves with "deep value" items, particularly with Amazon dedicating more digital square footage to home goods. Bed Bath & Beyond is pitting itself against a low-cost competitor, and taking the low-price road will pinch profits further.

The track record of management also doesn't inspire confidence that these maneuvers will work. Reducing how much product it has, making fewer items available for on-site purchases, but also creating a treasure hunt atmosphere sounds contradictory and confusing. Even the plan to moderate declining operating profits through 2019 and return to growth in 2020 is only a projection. In short, this fourth-quarter earnings report was everything investors feared Bed Bath & Beyond would say, and more.