While timing related to its vertical integration affected the bottom line, the dominant U.S. steelmaker still delivered strong profits and an upbeat forecast.

Nucor Corporation (NUE -2.18%) reported its first-quarter 2018 results on April 19, delivering earnings of $1.10 per share. While this was a little less than the year-ago result of $1.11 per share and the $1.20 per share in the fourth quarter of 2017, it was above most investor expectations. And when adjusted for one-time gains and expenses related to the newly enacted federal tax law in late 2017, and for tax-status changes at a subsidiary, it was a better result than recent quarters.

At the same time, the company reported strong sales and growth in steel volume, which management attributed in part to pressure on imports as the Trump administration promises to implement steel tariffs or limit steel imports in the near future. Whether trade actions happen or not, however, Nucor's management is very optimistic about its future. Let's take a closer look at the company's earnings report, and at what management says investors can expect. 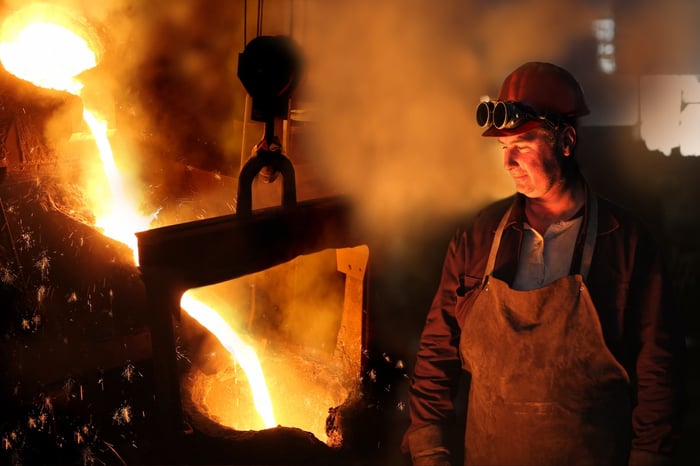 Yet even with higher volumes, prices, and steel mill utilization, Nucor's earnings and operating cash flow were down. The company said that key input costs were higher in the quarter. Energy costs were up $1 per ton, while steel scrap and scrap substitute (Nucor utilizes recycled steel for nearly all of its production) costs were up 19% year-over-year. Not only did this affect its net income, but it was a key reason why operating cash flow was $184.5 million, down from $244.1 million year-over year.

But the results were at least partly due to timing, as we will discuss in the next section.

A quick look at the balance sheet

One of Nucor's strengths for many years has been its balance sheet. Compared to its competitors it has a relatively low debt ratio. And it has plenty of liquidity in the form of cash, and access to more capital via a revolving credit facility.

At the end of the first quarter, Nucor reported it had $760 million in cash and $3.82 billion in debt. Over the past year, Nucor has reduced its debt by 13%, though its cash balance has also fallen by about half, to the lowest cash balance in about a decade. But a closer look at its balance sheet -- particularly working capital -- indicates that the change is at least in part due to timing. Its cash balance declined $189 million over the quarter, but accounts receivable, inventory, and other current assets increased by $280 million, while current liabilities only increased by $20 million. In other words, its balance sheet is likely a bit stronger than it was at the beginning of the quarter. 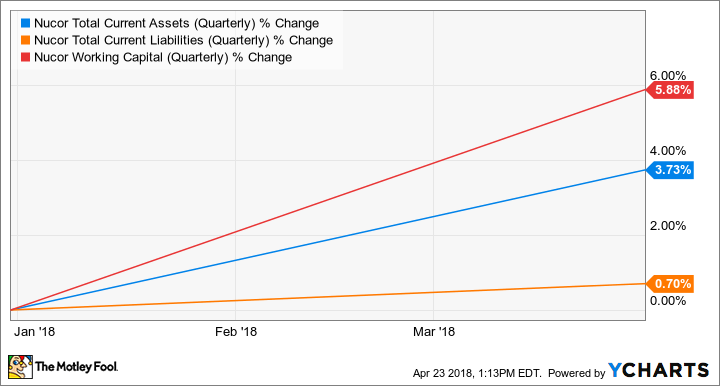 On the earnings call, CFO Jim Frias confirmed the impact of timing, both on the balance sheet and on the company's earnings, saying "the timing impact of Nucor's significant vertical integration ... resulted in an adverse swing of about $70 million on Nucor's pre-tax profits."

Since the Great Recession, Nucor has invested more than $8 billion in growth, primarily through strategic acquisitions that have been immediately accretive to cash flow and earnings. And while future acquisitions shouldn't be ruled out, management has started to prioritize capital expansion. Nucor is planning to spend nearly $700 million on capital expansion, product improvement, and cost-savings projects in 2018, more than it spent on all capital projects (including maintenance) in 2017. Investors should note that these expansion projects will take time to come online and start adding to the bottom line, and could actually weigh on earnings as they increase expenses before commencing operations.

For instance, Nucor recently announced plans to build a steel mill in Florida. It will cost $240 million to build and will take two years to complete, as compared to a $240 million acquisition that would start contributing cash flow the day it closed. In total, Nucor has seven internal growth projects underway at a cost of $1.3 billion, most of which should come online in 2019.

But even with the short-term drag these capital projects may cause, Nucor management remains very positive on its prospects, saying second-quarter earnings are "expected to increase significantly compared to the first quarter of 2018." The main catalysts are higher prices, sustained demand from end-use markets, and expectations that imports will decline as the U.S. government takes action to reduce illegal price subsidies by some foreign governments.

The steel industry will always be cyclical, and investors must bear that in mind when owning a stock like Nucor. But even with the pressure of a very long downturn and the risks of foreign trade continuing to affect prices and demand, Nucor's quarterly results continue to demonstrate the strength of its business.