So says the Moody's analyst who raised Netflix's credit rating.

Let's face it: Netflix, Inc. (NFLX 9.29%) has been spending boatloads of cash on content. In the company's first-quarter financial report, Netflix confirmed that it would be spending between $7.5 billion and $8 billion on content in 2018, a significant increase from the $6 billion budgeted for 2017.

That spending and the resulting negative free cash flow are the reasons most cited by Netflix bears in professing their doubts about the company. Netflix expects free cash flow in a range of negative $3 billion to $4 billion in 2018, after a negative $2 billion for 2017.

Analyst Neil Begley from Moody's has run the numbers and thinks that will all change relatively quickly. 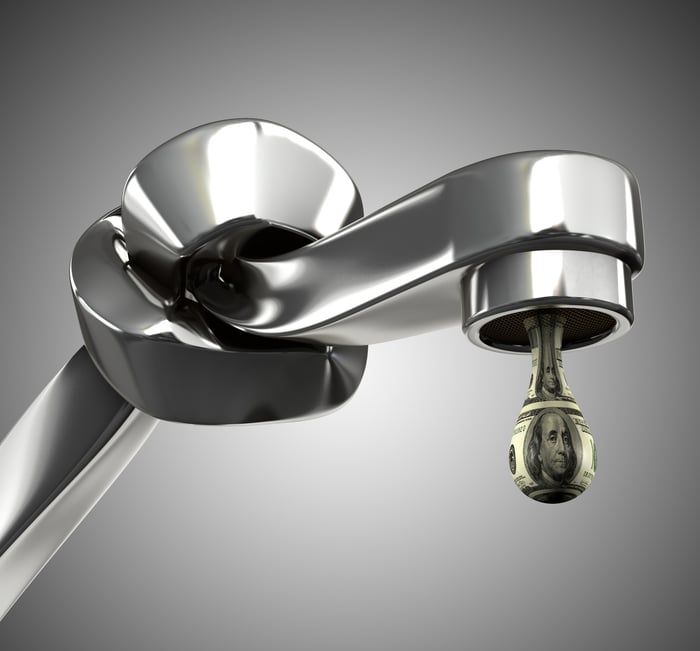 Escalating subscriber growth is the ticket

Earlier this month, Moody's raised the credit rating on Netflix's debt, based on the company's growing revenue and ever-increasing subscriber growth rates. Begley said that while the company's debt-to-EBITDA ratio (which measures how long it will take it to pay down its debt) is currently "high" at 7.3, he expects to see revenue increases of more than 20% in each of the next three years, bringing that ratio "comfortably under 5 times by 2020."

Begley believes that Netflix will exceed "200 million subscribers" by the end of 2021, while increasing profit margins will turn the company cash flow positive by 2022:

We expect the steady subscriber growth, together with gradual price increases will outpace the increasing investment in content and the upfront working capital spending on self-produced and owned programming, resulting in steadily improving margins ... As a result, we forecast the company becoming cash-flow positive in approximately five years.

A quick review of Netflix subscriber growth in recent quarters shows that the analyst's forecast is easily achievable:

Data source: Netflix filings with the Securities and Exchange Commission.

Starting with 2017 revenue of $11.69 billion, and assuming 20% annual revenue growth, the company would see:

It's cheaper in the long run

The reason Netflix is spending so much money on its original programming is simple economics. When the company licenses shows from other providers, it's essentially paying rent. While that may be less expensive over the short term, it's undoubtedly more costly over time. As with buying a house rather than renting, generating its own content has higher up-front costs -- but thereafter Netflix owns the content, adding to its growing cache of intellectual property. Owned content becomes much less expensive when the cost is spread among the company's growing customer base.

Netflix's consistently strong subscriber growth has gone a long way toward validating its content strategy -- and it may soon reverse the company's negative cash flow.