Intel's bet on Nervana Systems looks like another dud.

According to Intel, Nervana's dedicated neural network training chips were slated to provide "unprecedented compute density at an order of magnitude more computing power than today's state of the art [graphics processing units]." 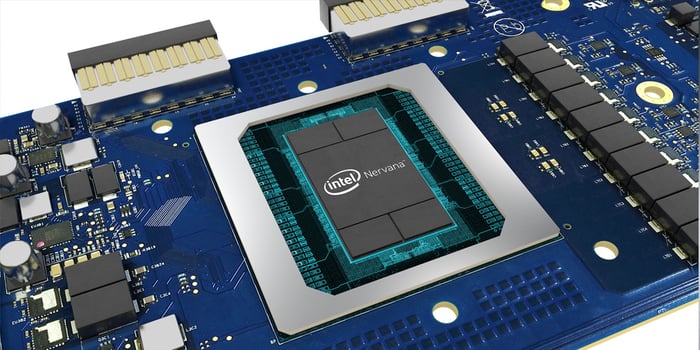 Late last year, Intel announced that it would begin shipping its first Nervana Engine by the end of 2017 and that it was "thrilled to have Facebook (META -1.01%) in close collaboration sharing technical insights as we bring this new generation of new AI hardware to market."

Just a few months later, Bloomberg reported that Facebook is working to develop its own hardware, likely for artificial intelligence and machine-learning workloads.

Here's why this could spell trouble for Intel's Nervana efforts.

Why build your own chips?

While a giant like Facebook can certainly afford the expense of building its own chips, the reality is that it's a non-trivial undertaking. Facebook isn't in the business of building and selling chips to customers -- it's interested in making sure that the vast data center infrastructure that supports its platforms is as efficient as possible to keep its total cost of operating as low as possible.

If a third-party company like, say, Intel is willing to do the work to build great solutions for this market (especially if it'd be hard to replicate the performance/efficiency of the third party solution), then it makes sense to simply use that third-party solution. Moreover, when there are many chip vendors vying to build the best solutions possible, a buyer like Facebook is usually in good shape in terms of hardware pricing, too, as competition naturally brings lower prices.

It generally makes sense for a company to build its own chips in the following scenarios:

Although it's conceivable that the second point is a key factor in driving Facebook to explore building its own chips, my guess -- based on the fact that Facebook gave Intel permission to name drop it in the Nervana chip press release last year -- is that it's more of the first one.

Indeed, if Intel's Nervana chip is under-performing relative to the company's lofty claims (something that Facebook developing its own chips has me wondering about), and if the other dedicated machine-learning chip start-ups (there are a lot of them out there these days) can't deliver either, then it wouldn't be surprising for Facebook to think that its best chance of getting the hardware it needs is to build that hardware itself.

Facebook may be designing its own chips, but it'll need a third party to manufacture them. While Intel has advertised chip manufacturing services of its own in the past, those efforts don't seem to have gained much traction.

I believe, then, that if Facebook is successful in deploying its own artificial intelligence/machine-learning chip, it'll likely tap contract chip manufacturing giant Taiwan Semiconductor Manufacturing Company (TSM -3.10%) to manufacture the chips (since TSMC's manufacturing technology is arguably the best in the industry, and its track record is superb).

Such orders wouldn't be a game changer for TSMC -- Facebook's order volumes for such a chip wouldn't be anywhere near those of, say, a mobile processor or even a merchant graphics processor -- but it'd be incremental revenue over the long term -- always a good thing.