Ryzen's shortcomings have mostly been dealt with. Meanwhile, Intel has been asleep at the wheel.

Advanced Micro Devices (AMD 1.63%) teased its second-generation Ryzen PC CPUs on April 13, promising "disruptive" levels of performance for each of the four initial chips. With the new processors now available, one thing is clear: Intel (INTC 1.27%) has something to worry about.

The first-generation Ryzen chips, which launched a little more than a year ago, were a vast improvement over AMD's previous line of processors. The mainstream Ryzen chips featured as many as eight cores and 16 threads, twice as many as comparable Intel chips. In any application that could make full use of those cores, Ryzen excelled. 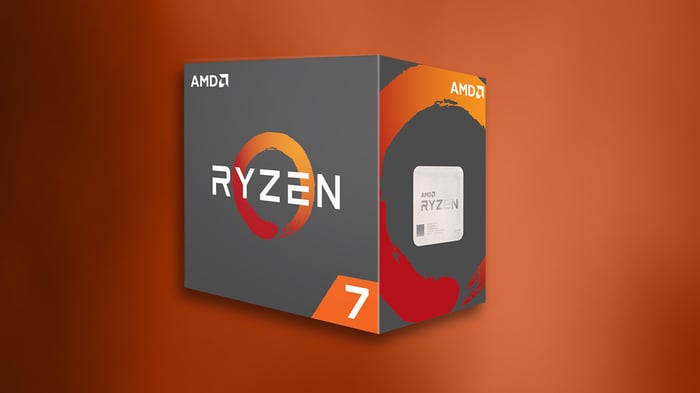 But AMD's effort had some shortcomings. Despite major improvements in single-threaded performance, Ryzen still lost out to Intel chips in applications that don't scale well with the number of cores. Those include everyday PC tasks, but also gaming. While PC games often take advantage of multiple cores, single-threaded performance is still important. Tom's Hardware, in its review of the high-end Ryzen 1800X, concluded that it was hard to recommend over Intel's cheaper quad-core chips for gaming.

AMD is aiming to close that performance gap with its second-generation products. These new Ryzen chips feature incremental improvements over their predecessors, but it's enough to declare that AMD has largely succeeded. The eight-core Ryzen 2700X, the highest-end launch chip, effectively tied Intel's six-core 8700K in Tom's Hardware's gaming tests. The 2700X is also about $30 cheaper, and its core count advantage gives it an edge in certain non-gaming applications.

There is still a performance gap in some cases. When it comes to productivity software, web browser performance, and how long it takes to open applications, Intel's chips still reign supreme. AMD's new chips are still behind Intel when it comes to raw single-threaded performance.

But in the gaming and enthusiast markets, AMD's second-generation Ryzen chips should give Intel a run for its money.

Intel needs to wake up

AMD's comeback in the PC CPU market required two things to happen. First, the company needed to come up with solid products. The first-generation Ryzen chips had some significant shortcomings, but the second-generation chips have only a few. AMD has done its part.

Second, Intel needed to mess up. The company's lead prior to Ryzen seemed insurmountable, but it has almost entirely squandered that advantage. Manufacturing problems, delays, and general stagnation have plagued the company. The bottom line: Intel's pace of innovation has slowed dramatically, creating an opening for AMD to exploit.

Intel faced essentially no competition in the PC CPU market for years as AMD was floundering with its pre-Ryzen architecture. There was no incentive to drive Intel to innovate. The company became complacent, and it underestimated the odds of AMD staging a comeback. Intel's overwhelming domination of the PC CPU market planted the seeds of its current predicament.

Had Intel taken the Ryzen threat seriously, AMD's resurgence could have been blunted. It didn't. The result is a genuinely competitive market for PC CPUs. That's great for consumers, and not so great for Intel.