You may get more than you bargained for with this risky retailer.

On the surface, upscale furniture retailer RH (RH -1.77%) seems to be doing a lot of things right. The company -- formerly known as Restoration Hardware -- has leaned into the upscale market, thereby differentiating its products from the competition. Its inspired storefronts are a far cry from cookie-cutter shopping malls, and a membership-based business model makes it less reliant on blowout sales.

This is practically a blueprint for how to survive in the age of Amazon and e-commerce.

Convinced as you may be, however, RH is not without its flaws. As you look behind the curtain, there are red flags on the company's balance sheet. Its debt is ballooning, up 922% in the last five years. So far, it's smooth sailing thanks to a strong economy, but choppy seas could prove disastrous for RH investors.

Blazing a trail in retail

RH's current position has been forged by its bold CEO Gary Friedman, a retail industry veteran who -- legend has it -- began his career in the stockroom at clothing retailer Gap. He climbed the ranks there quickly, hopped over to RH's home products peer Williams-Sonoma and eventually assumed the CEO role at Restoration Hardware in 2013. 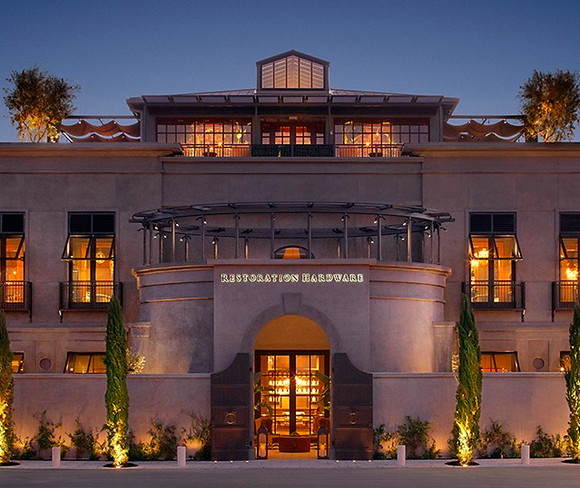 Friedman's career is emblematic of his leadership approach. He was, for instance, the youngest manager in Gap's history, in addition to becoming the youngest district and regional manager at that time. He is aggressive and unconventional. At RH, for example, many of his letters to shareholders are inspired by quotes from Steve Jobs, Muhammad Ali, and Robert Frost -- icons who championed being different and bold.

Going against the grain in retail is something to be admired at this moment in time. Competing on cost is not an option when other furniture retailers like Wayfair and Amazon have developed incredibly efficient e-commerce platforms. A brand needs to be distinctive. It needs to create an emotional appeal. RH has excelled on both fronts.

The company has forsaken the promotional events that others have fixated on and instead created captivating storefronts. Its Chicago-based "gallery", for example, is home to the seventh most Instagram-ed cafe in the U.S. Meanwhile, the atrium at the same store has witnessed more than 50 wedding proposals in its first couple of years in operation. Visitors are flocking to that location, despite being situated in a less than ideal residential neighborhood.

While that's just one example, the overall trend of 15.4% compound annual top line growth over five years reinforces the idea that being different is delivering impressive results for RH. But while boldness and risk taking can work in merchandising, the question for Friedman and RH is: Can it work on the balance sheet, too?

Going out on a limb

At the same time that RH has been reimagining its storefronts, it's also been rearranging its finances. Back in 2014 the company's debt, for example, stood at $90 million. This was a conservative figure. To put it into perspective, RH's debt-to-EBITDA ratio was less than 1x.

Since then, the company has steadily increased its debt load, which now rests at over $900 million. In turn, that debt-to-EBITDA ratio has jumped to 4.7x.

Consequently, interest expense has grown from $5.7 million in 2014 to $62.6 million in 2018. Here's a look at how those indicators of financial leverage stack up next to one another: 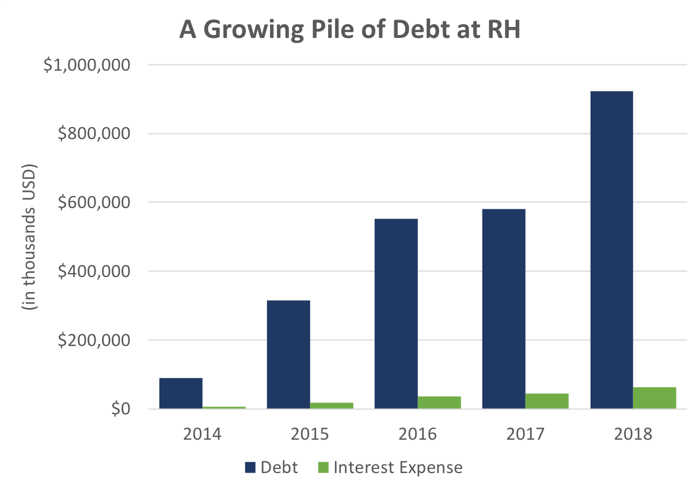 The driving force behind this large debt load has not been the expansion of opulent storefronts, however. It's primarily been the result of major stock repurchases by the company. In 2017, RH repurchased slightly more than $1 billion of its own common stock. The company's cash on the balance sheet averaged $124 million during the year, so the buybacks were primarily financed by debt.

Watching this unfold has been unnerving, to say the least. As my Foolish colleague Brian Stoffel pointed out, there are some glaring issues with Friedman's strategy. For one, it's causing a short squeeze on what has been a heavily-shorted stock. This can create a perverse incentive for management to continue repurchasing shares to force the short-sellers to bid up the stock price. And none of this price movement, of course, would be tied to the underlying fundamentals of the business.

Second, the incentives are even more suspect when you consider that Friedman's compensation is tied directly to an escalating stock price. He stands to personally prosper as the share price spikes, which is very different from having incentives tied to the overall value of the company or -- even more rationally -- to his ability to achieve high returns on invested capital, an internal and less easily manipulated metric.

Finally, as my fellow Fool Jeremy Bowman described in 2016, this is a company that is highly susceptible to the ebbs and flows of the economy, to fluctuations in weather, and to the whims of fickle high-end shoppers. As he pointed out only 17 months ago, 2016 was largely a "Year of Excuses" for this retailer. The stock cratered 61% during 2016, a very different performance from the 181% gain it experienced in 2017.

Be wary of financial shenanigans

It's one thing to boldly buck the trends in design, fashion, and merchandising. It's another to take aggressive financial risks such that shareholders could question your motives. Is management being smart and using temporarily cheap debt to reduce its shares? Or is Friedman focused on hitting short-term targets out of self-interest?

In its latest quarterly results, the company says it's "optimizing the allocation of capital". To date, this optimization has worked to its advantage. Likewise, in 2018 the expected free cash flow of $250 million leaves wiggle room above and beyond the $62 million interest expense noted previously. That, of course, is an expectation, which is dependent on an array of variables, many of which were present in a painful way in 2016.

While it's difficult to say which direction the market's winds will blow in 2018, RH's management could take measures to reduce their exposure in the event of a downturn. Yet Friedman and company seem to be doing the opposite. In my opinion, they're being overly aggressive without a real justification.

It may not be disastrous, but it could be dangerous. And that should be enough to keep investors who are otherwise intrigued by the turnaround story away from this stock.