Positively, the toymaker's management said 2019 should see a return to previous growth dynamics.

Toymaker Hasbro (HAS 2.17%) reported first-quarter 2018 results before the market opened on Monday. Revenue and adjusted earnings per share (EPS) dropped 16% and 81%, respectively, from the year-ago period. The company attributed the declines to the "liquidation of Toys R Us in the U.S. and U.K., along with uncertainty in its other operations, as well as retail inventory overhang, primarily in Europe."

Shares of Hasbro closed up 4% on Monday, despite the company's results falling short of what many investors were expecting. We can attribute this market reaction to investor optimism that the worst of the hit from the Toys R Us bankruptcy and liquidation should be behind the company by the second half of the year. Revenue included a favorable $19.5 million impact from foreign exchange and a negative impact due to the reported quarter having one fewer week than the year-ago period.

As for the organization transformation, Hasbro had planned to hire new talent to lead in today's converged (online, including mobile, and brick-and-mortar) retail environment. It had originally planned to bring new skill sets on board over time beginning later this year, but it has sped up its planned actions due to the current toy retailing environment.

For some context -- though long-term investors shouldn't place too much importance on Wall Street's near-term estimates -- analysts were expecting adjusted EPS of $0.34 on revenue of $819.4 million. So Hasbro fell significantly short on both expectations.

None of Hasbro's brand categories posted positive growth in the quarter thanks to the situations involving Toys R Us and excess inventory in the field. 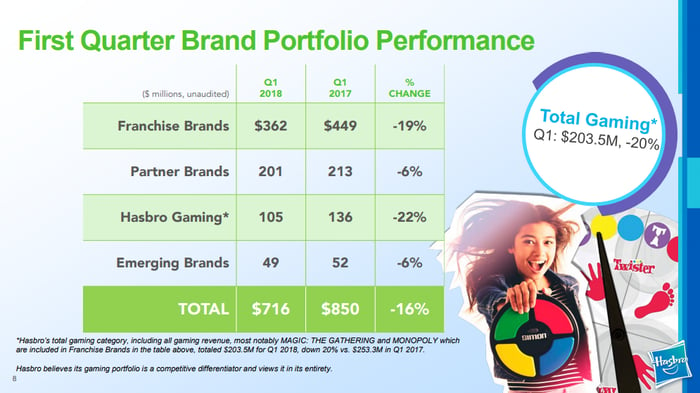 In franchise brands -- Hasbro's most important internal brands -- only Monopoly posted revenue growth, while all other brands declined. Partner brands performed the best (or "least worse") of the group, with revenue declining 6% year over year. Revenue increased in Disney's Marvel (thanks largely to the hit movie Black Panthers, released in February) and Beyblade, but it was more than offset by declines in other partner brands. Gaming saw growth in Dungeon and Dragons, Jenga, and several other new game launches, but this growth was more than offset by declines in other properties.

As for segments, revenue dropped 19% year over year to $364.3 million in U.S. and Canada, declined 17% to $287.9 million in international, and grew 21% to $64 million in entertainment and licensing, driven by growth in consumer products and digital gaming. The adoption of a new revenue recognition standard also contributed to the latter segment's growth. Within international, revenue in Europe fell 28%, increased 2% in Latin America, and grew 3% in Asia Pacific. Revenue in emerging markets declined 5% as reported.

The Hasbro teams executed extremely well during a challenging first quarter. Hasbro brands are resonating with consumers and consumer takeaway is positive. However, as we discussed earlier in the year, our first quarter was expected to be difficult. We are working to put the near-term disruption from Toys"R"Us behind us. Our global retailers view this as an opportunity in a key consumer category and are partnering with Hasbro to develop growth plans for our brands. New Hasbro initiatives shipping in this quarter and beyond won't be caught up in the Toys"R"Us liquidation process. With the rapid shift to a converged retail environment, we accelerated plans we originally had spread throughout the year to transform our commercial organization on a more immediate basis.

In short, Hasbro turned in a worse quarter than was largely anticipated because of the Toys R Us liquidation and because it entered the quarter with excess inventory in the field, particularly in Europe.

The good news is the Toys R Us impact should be significantly less in the second half of the year, and over in one year, Goldner said on the earnings call. And Hasbro's toy sales should get a boost from partner Disney's strong movie lineup for the remainder of this year, which includes a planned May release of Hans Solo: A Star Wars Story.