Please ensure Javascript is enabled for purposes of website accessibility
Free Article Join Over 1 Million Premium Members And Get More In-Depth Stock Guidance and Research
By Jim Crumly - Apr 24, 2018 at 9:31AM

One of the surprises in AbbVie's fourth-quarter results that led to a 14% jump in the stock price the day they were announced was the success of its recently launched drug for treating hepatitis C virus (HCV), Mavyret. CEO Richard Gonzalez said the drug finished 2017 with a 32% market share in the U.S. and was a factor in the decision to increase sales guidance for 2018. Mavyret works across all HCV genotypes, has a 98% cure rate in a course of treatment that lasts only eight weeks instead of 12, and was priced aggressively below drugs from Gilead Sciences, putting the hurt on that company's outlook.

Behind Mavyret's success is a protease inhibitor called glecaprevir, discovered by AbbVie partner Enanta Pharmaceuticals ( ENTA -3.67% ), which is now collecting a tiered, double-digit royalty on half of the revenue from the emerging blockbuster. Enanta is using the new flow of cash to advance its pipeline of wholly owned drugs, which, if they prove anywhere near as effective and successful as Mavyret, could pay off handsomely for patient investors in this small-cap biotech.

Profitable and getting more so

Enanta specializes in creating drugs for viral infections and liver diseases. Before glecaprevir, the company worked with AbbVie to develop another successful protease inhibitor called paritaprevir, which went into earlier HCV drugs that are still being sold. The partnership with AbbVie has helped the company to be profitable since 2014, and last year, the company earned $0.91 per share and increased its cash hoard to $294 million with no debt. 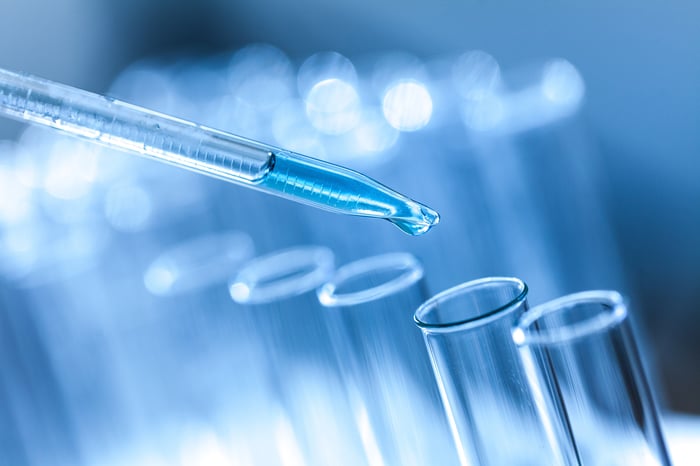 The company spent $78.2 million in operating expenses last year, but its strong balance sheet and the growing revenue stream from AbbVie's HCV portfolio will allow it to spend even more this year. AbbVie expects revenue from HCV to grow from $1.27 billion in 2017 to $2.5 billion this year.

A pipeline aimed at huge opportunities

Enanta's strategy is to use its expanding resources to develop the pipeline of its own drugs, which includes some interesting candidates. The most immediately promising is EDP-305, an FXR agonist, meaning it is designed to selectively bind to and activate the farnesoid X receptor, a main regulator of bile acid levels in the liver and small intestine. These receptors are believed to play an important role in the regulation of lipid metabolism, insulin resistance, inflammation, and fibrosis.

EDP-305 is being developed as a treatment for non-alcoholic steatohepatitis (NASH) and primary biliary cholangitis (PBC). NASH is a huge market opportunity with a patient pool size that may rival that of HCV. There are estimated to be nine to 15 million people with the disease in the U.S., and the prevalence is growing due to its association with obesity and diabetes. There are currently no approved therapies for it. PBC is a smaller indication for which there are two approved drugs, including Intercept Pharamaceuticals' Ocaliva, but Enanta believes EDP-305 is more potent and selective. Enanta is conducting phase 2 studies of EDP-305 in NASH and PBC, and the FDA has granted Fast Track designation to the drug for PBC and NASH patients with liver fibrosis.

Another disease Enanta is going after is Respiratory Syncytial Virus (RSV). There is currently no effective treatment for RSV, which is the most common cause of bronchiolitis and pneumonia in children under the age of one. The virus also afflicts the elderly, causing 177,000 hospitalizations and 14,000 deaths among older people in the U.S. every year. Development of EDP-938 is still in the early stages, but animal studies showed that the N-protein inhibitor dramatically reduces viral load by targeting the virus replication mechanism. A phase 1 study is under way.

Finally, Enanta is conducting pre-clinical studies for a hepatitis B (HBV) treatment. This is another monster indication with 250 million patients worldwide, and existing treatments rarely result in a true cure. Enanta is researching EDP-027367, a molecule that targets the virus at multiple points in its life cycle, with a goal to create a functional cure.

Competing with the big guys

If there is one thing that stands out from Enanta's pipeline, it's that the company certainly doesn't lack for ambition. NASH, RSV, and HBV are such huge opportunities that they've attracted a lot of attention from the other companies in the anti-viral field, including big companies with far greater resources.

In NASH alone, there are several companies in advanced trials already, including Gilead and Intercept. The list of companies conducting phase 2 trials in NASH reads like a who's who of big pharma, including GlaxoSmithKline, Bristol-Myers Squibb, Novartis, Novo Nordisk, Pfizer, and Shire plc. There are also similarly long lists of companies pursuing RSV and HBV. Does Enanta stand a chance with this sort of competition?

One need look no further than the example of the company's hepatitis C drugs to see the answer. HCV seemed like a solved problem, with drugs that offered a total cure and the patient population in decline. Enanta discovered a better drug, and now the company and its big partner are taking major bites out of a worldwide market worth $12.5 billion. There is certainly reason to believe that similar success is possible in these huge markets that don't even have such entrenched incumbents.

And even if a competitor wins approval for a drug in these markets, diseases like NASH are very complex. It's likely that there will be no one magic cure; multiple drugs for the same indication will probably end up on the market. If EDP-305 works, it will find its place in the bigger picture, and the same could be true for the other candidates the company is working on.

With big pharma flush with cash from repatriated overseas profits, Enanta could become a valuable acquisition target. Its partnership with AbbVie would make it a logical choice for that company, but its $1.7 billion enterprise value could make it a reasonable-sized purchase for other big pharma companies that want to supplement an anti-viral business with a new small molecule drug discovery platform.

However, even if Enanta stays independent, the stock is an interesting opportunity for investors willing to take the risk. Commercialization of its pipeline is still years off, but the expanding royalties from its HCV molecules give it the opportunity to move along its wholly owned drug candidates as quickly as possible and potentially add new ones.

With a market cap of more than 15 times its revenue, Enanta stock isn't cheap, and success with its pipeline is anything but certain. But if recent success with HCV is any indication of the company's ability to discover effective anti-viral and liver disease treatments, Enanta could have a long road of growth ahead.

Editor's Note: The original article had an incorrect ticker for Bristol-Myers Squibb. That has since been corrected. The Fool apologizes for the error.