Shares of subprime automotive lender Santander Consumer USA Holdings (NYSE:SC) are up by about 16% as of 11:35 a.m. EDT after the company announced earnings that were better than Wall Street expected. It earned $242 million, or $0.67 per diluted share, driven by higher loan originations, falling expenses, and declining provisions for loan losses in the first quarter.

Santander Consumer USA's first-quarter results were good enough to lift shares of other auto lenders, including Ally Financial (NYSE:ALLY). Shares of the online bank and prime auto lender climbed 4.7% ahead of its earnings release on Thursday.

Santander Consumer USA Holdings' loan and lease volume surged as the company originated $6.3 billion in total auto loans and leases in the first quarter, up from $5.4 billion during the same period last year, an 18% increase. The company noted that Chrysler originations were a large driver of loan volume, as its penetration rate increased from 23% last year to 28% in the first quarter. 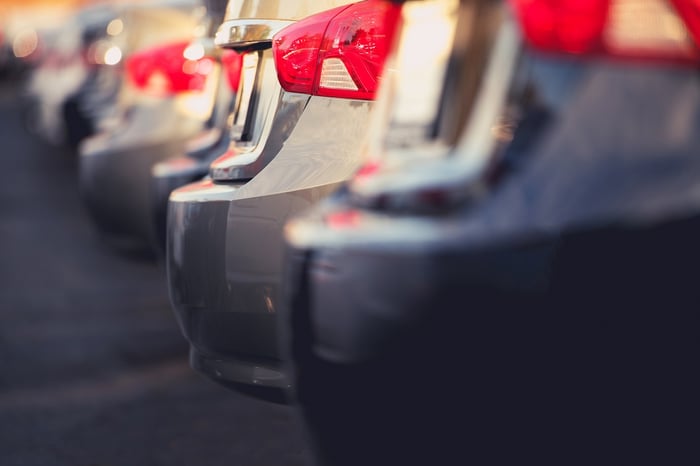 Credit quality also improved, as the company reported that 30- and 60-day delinquencies fell to 7.3% and 3.8% of loans, respectively, in line with delinquency ratios during the year-ago period.

Loan losses are a fact of life for subprime auto lenders, but one metric suggests that the business is reaching an inflection point. Santander Consumer USA said that its auction-only recovery rate, which measures how much it collects from bad loans when cars are repossessed and sold, rose to 46.8%, up from 44.9% last year. Recovery rates have generally declined, having been as high as 55% as recently as 2014.

Santander Consumer USA's executives were upbeat about gaining share with Chrysler, telling one analyst on its earnings conference call that "it's fair to say there's a lot more engagement with the Chrysler team around their initiatives, the things that are important to them, the models that are important to them, both on the lending and leasing side. And I think we've gotten ourselves into a pretty good rhythm with them."